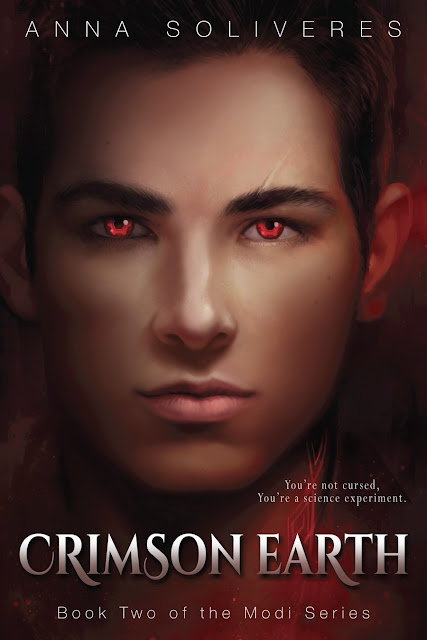 Title: Crimson Earth
Series: Modi #2
Author: Anna Soliveres
Genres: Science Fiction, Young Adult
Publication date: December 10th 2015
BLURB supplied by Xpresso Book Tours
Aeva Storm finally has the answers she’s been looking for since the night she was struck by lightning. She knows who she is—and more importantly,what she is. But her secret isn’t hers alone to keep, and some of those who know the truth will do anything to control her.
In the sequel to the acclaimed Violet Storm, Aeva must decide how far she’ll go to protect her identity and to find her missing sister in a world she hardly recognizes. She must embrace her new life—and her strange new body—if she hopes to save the only place she and her family have left to call home.
Filled with action, mystery, and heartbreak, Crimson Earth finds Aeva, Ruven, and Karth on opposing sides as the war between The False Alliance and the Monarchy draws near.
Can they band together to fight against the evil threatening the City? Or will they destroy each other before the war has even begun?
Goodreads Link

PRE-PURCHASE LINKS
Amazon US
Amazon UK
(not yet available) Anna Soliveres has always been a storyteller but it wasn't until her early twenties when she began writing novel length works. The result was an enthusiasm to get better at the craft until her work could be shared with the world. Released in March 2014, VIOLET STORM is her debut novel. The sequel, CRIMSON EARTH releases Dec. 2015. Anna is currently working on another young adult sci-fi series, titled SNOW DOLLS.

To learn more, please visit her at www.annasoliveres.com.