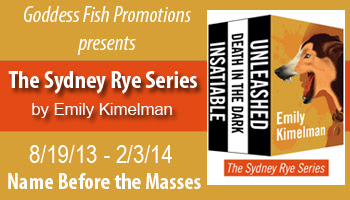 The Sydney Rye series of mysteries features a strong female protagonist and her rescue dog, Blue. This series is recommended for the 18+ who enjoy some violence, don't mind dirty language, and are up for a dash of sex. Not to mention an awesome, rollicking good mystery!

This box set includes all three of the Sydney Rye Books.

When the series begins Sydney Rye is named Joy Humbolt. She does not like people telling her what to do, so it comes as no surprise that she was just fired from her last job. When she buys Charlene Miller's dog-walking business on Manhattan's exclusive upper east side, it seems like the perfect fit: Quiet environment, minimal contact with people.

But then one of her clients turns up dead, and Charlene disappears. Rumors say Charlene was having an affair with the victim--and of course, everyone assumes Joy must know where she is. Joy begins to look into the crime, first out of curiosity then out of anger when there is another murder and threats start to come her way.

When police detective Mulberry is assigned to the case, Joy finds a kindred spirit--cynical and none-too-fond of the human race. As they dig deep into the secrets of Manhattan's elite, they not only get closer to the killer but also to a point of no return. One last murder sends Joy Humbolt hurtling over the edge. Her only chance of survival is to become Sydney Rye.

DEATH IN THE DARK
(A Sydney Rye Novella, #2)

At the beginning of Death in the Dark we find Joy Humbolt hiding, not only from the law, but also from her past and the mistakes she's made. Living this isolated life doesn't last long though when a visit from Mulberry brings Joy to accept her new identity as the Private Detective, Sydney Rye. To complete the transformation, Joy must learn to control her emotions as well as her giant aggressive dog, Blue. With the help of an expert trainer, Joy learns to fight with her mind as well as her body. However, when the daughter of a close friend is brutally murdered in the desert, Rye turns away from her mentor to seek revenge. Sydney's quick temper and deadly intentions lead her into a trap that she will need all of her new skills to survive.

The third book in the series begins with private detective Sydney Rye living a simple, disciplined life in London, but when a dangerous man from her past calls, Rye finds she cannot turn him away. Robert Maxim explains that the daughter of a powerful friend has gone missing and he wants Rye to find her. In exchange he offers her something she had given up hope of ever having; freedom from her past.

With her dog, Blue, at her side, Rye meets up with her new partner, a handsome man she's not sure she can trust. Heading for Mexico City, they go undercover, posing as husband and wife. After meeting with the bereaved parents, Rye starts to sense that there is more going on than just a missing girl. But it isn't until they arrive in the Yucatan Peninsula, hot on the girl's trail in Paradise, that all hell breaks loose. Sydney has to reach out for help from old friends and deal with the consequences of her past, if she's going to find the girl and keep them all alive.

STRINGS OF GLASS is the fourth novel in Emily Kimelman's Sydney Rye Series of dark murder mystery novels. This series features a strong female protagonist and her rescue dog, Blue. It is recommended for the 18+ who enjoy some violence, don't mind dirty language, and are up for a dash of sex. Not to mention an awesome, rollicking good mystery!

Sydney Rye is hanging out in India with her boyfriend, Dan, reading paperbacks and sipping beer. No violence and no reminders of her past. But when she and Blue, are attacked by a pact of wild dogs, Sydney starts to feel that old itch again; to do good by being bad.

Trouble finds Rye when she stops the attempted rape and murder of Anita, a reporter working on a story of corruption and human trafficking. The atrocities Anita describes send Sydney, Blue and Dan on a quest that takes them across India after a dangerous and, up until now, untouchable, figure. While Sydney struggles to accept her true nature she realizes that it is the only way to end decades of abuse and exploitation. But Rye fears that she will lose herself, becoming no better than the monster she fights against.

We walked over the Brooklyn Bridge on the wooden pedestrian path that hangs above the roaring traffic. We followed the thick steel cables under the massive granite towers. To my left, glass skyscrapers mixed with turn-of-the-century stone houses perched on the tiniest tip of Manhattan. A gaping hole in the sky where the towers used to be made the island look off- balance. The Statue of Liberty glowed small but still impressively in the distance.

City Hall, white and large-windowed, stood at the end of the bridge. I turned us uptown, and we passed more courthouses. People stood outside fiendishly smoking in doorways, even at this late hour. Most were women who had come to watch their husbands, sons, and boyfriends be arraigned. To cry in the bathroom, to plead with the judge, to yell at the officer behind the bullet-proof glass, to smoke cigarettes outside.

Heading uptown, we passed Canal Street, its storefronts covered in pull-down metal gates in every shade of gray, deserted by pedestrians, at least human ones. The entrance to the Manhattan Bridge was still active with cars honking at each other as they tried to make the turn. A police officer watched from his parked cruiser.

In Soho we passed the flagship stores for Prada and Apple, and galleries with photographs of Bob Dylan and Audrey Hepburn. Above us, giant windows of fabulous lofts glowed. The occasional cobblestone street, the uniquely dressed, the tall, the skinny—here was the center of deciding what we want to be, how we want to live, what will make us belong. Giant billboards of young girls caressing bare-chested, glistening men in expensive jeans loomed over us.

Crossing Houston with its four lanes of traffic into Greenwich Village, we watched drunken coeds pour out of loud, stinking bars. “That’s a really cute dog,” a perky brunette, illegally drunk, told me from between the supporting arms of two friends. 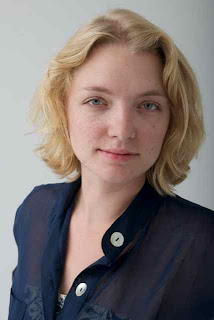 I wish I knew what my ideal writing space was. Because, by god, I would create it. The problem is that the best writing I’ve ever done has been under all sorts of different conditions. In a smoldering hot beach hut in India, at a desk overlooking a frozen lake in New York, while flying on planes and traveling on trains. There is no one place I can go to and make the magic happen. Though I’m starting to think that maybe a treadmill desk might be the answer…
Because the ideal writing space is always moving. One minute it’s there and then, poof, it’s gone. Never leaves a forwarding address, mind you. Sometimes it will shift while I’m in the middle of a scene and I’ll have to wander around until I find it again. If I’m in the kitchen, the space has jumped to the living room. Once I settle there it moves again, this time to the local coffee shop, so I’ve got to get in my car and chase it down. You can see how exhausting this is for me.
Then sometimes I’ll be doing something completely different and the space just shows up. Here I am waiting for the dentist and the ideal space arrives and demands I put pen to paper. It’s really quite irritating. Oh, but I better watch out. I don’t want to make the ideal writing space mad. When we are together everything is just wonderful. You’re the best, please come visit me again soon.
How do you find your ideal writing or work space? Is yours constantly wandering off as well?