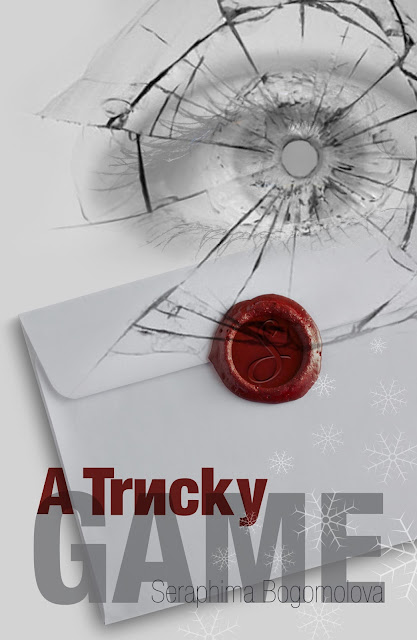 A Tricky Game, by Seraphima Bogomolova, is a mystery psychological thriller, published by Souliris UK Ltd, released on July 15, 2013.

In Russia, an aluminum magnate, Kazimir Stankevitch, enters into an unwritten agreement with Angela Moreaux, an enigmatic and seductively attractive woman that he secretly desires. Later that night, as she returns home from a nightclub, a shot is fired at her. At the same time, in the Ritz, her unsuspecting associate has a meeting with an elderly Swiss gentleman, Jacques Moreaux, who delivers to him a mysterious letter signed by Angela. In a game of genuine intents, secret longings and seconds agendas, the seemingly unconnected yet mysteriously intertwined events unfold on the pages of this compelling psychological novella. As the stakes in the game go higher, the young woman finds herself confronted with life choices that will challenge her on unexpected levels.

EXCERPT
Through the crowd of clubbers and dancing strippers, she walks toward him. Approaching, she stops, her eyes fastened on his profile. Instantaneously sensing her presence, the man turns round. Her hand extended to him, he grabs it and, parting his lips, impresses them on it, leaving a flaming trail on her skin. She pulls it away. He looks up.

"Are you playing with me?”

“I think you enjoy being played with."

She sits down. His eyes on her mouth, he watches her light up a cigarillo, her lips encircled around its chocolate tip. She draws on it, releasing a blow of smoke. Motioning at a waitress, he orders a bottle of Krug. Champagne's poured into their glasses, he raises his glass.

"Do you think it really matters what I wish?" 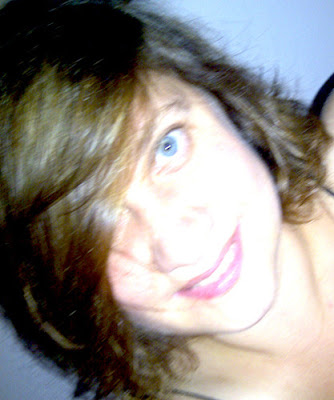 What is your name, where were you born and where do you live now?
My name is Seraphima Bogomolova, I was born in St Petersburg, Russia, and currently reside in Dubai, UAE.

What is the name of your latest book, and if you had to summarize it in less than 20 words what would you say?
The title of my latest book is A Tricky Game. It's a story of a young enigmatic woman and her ways of dealing with the tricks life plays on her.

How long does it usually take you to write a book, from the original idea to finishing writing it?
For me there seems to be no specific rule of thumb when it comes to writing. For example, the first version of my debut novella, A Tricky Game, was written in 9 months, and the second version of it took me only 2 months to re-write and edit.  Now that I'll be starting work on my second novella I cannot even say how long it will take to complete it, it maybe one month or a year.

Do you have plans for a new book?
There is this one story that I'd love very much to tell and share with the readers, the only dilemma I've got with it is that it's a true one, and I have to be careful in not disclosing too much about the main character but at the same time enough for the story to be interesting. I'm planning to start writing it in August/September 2013 and hopefully will finish by next spring. Once finished I'd love to turn the book into an interactive digital one, as an experiment.

What genre would you place your books into?
I would categorize my novella, A Tricky Game, as psychological thriller with suspense and mystery elements in it. I find thriller genre the most interesting one, offering many tools of creating an intriguing story and communicating with readers. To my mind thriller genre is the most engaging one, both from writing and reading points of view.

What made you decide to write that genre of book?
I didn't think of the genre when I was writing A Tricky Game book, but it happened so that it turned out to be a psychological thriller. This, perhaps, happened because of my interest in psychology and love of mystery, which I unconsciously expressed in the book. I'm a Scorpio and Scorpios are all about mysteries and secrets.

If you had to choose to be one of your characters in your book, which would you be?
I'm already. The main character of A Tricky Game book, a young enigmatic woman, Angela Moreaux, is partly drawn from me. Her predicaments are very much my predicaments and lots of traits of her character are the ones that I display. The predicaments and dilemmas she faces during the story are the ones I have faced in my life on numerous occasions.

Where do you get your book plot ideas from?
From my own life, which is full of mysteries, interesting events, and unusual people.

Do you have anybody read your books and give you reviews before you officially release them?
Yes, I do. The first version of my debut book A Tricky Game was read and reviewed by my friend from London. She witnessed the creation and editing of it from the beginning to the end. She gave me very good advice in terms of writing, comparing it to music: the story, she said, should flow; if readers stumble while reading then the composition failed.
The second re-written version of the  book was partly curated by another friend of mine, a young man, whose love of perfectionism and an eye for detail helped me polish certain episodes in it, making sure the message is delivered in a comprehensive way.

Do you read all the reviews of your book/books?
Yes, I do.  They help me understand how readers view my work, which in turn helps me improve my storytelling techniques.

Would you ever ask a reviewer to change their review if it was not all positive about your book/books?
No, I wouldn't. I think there is no point in doing so, since everyone is entitled to their own perspective and point of view, no matter whether they are fundamentally wrong or right.

How do you come up with the Title and Cover Designs for your book? Who designed the Cover of your book?
'A Tricky Game' book cover was designed by an Italian graphic designer, Ivan Listo. We have worked on many other designs and projects together. In this case, I described the symbolism and the major points of the book to him, and based on my description and his creative intuition he came up with an idea for the cover.

Do you choose a title first, or write the book then choose the title?
I write the book first and then decide on the title. In the process of writing a book some draft titles for it can come to my mind, but the final decision is normally made at the very end, once I finish writing the book. In this way, I make sure that the title reflects the main notion of the story. Otherwise, it might happen so that the story will be led by the title, which can be very limiting.

Are character names and place names decided after there creation? or do you pick a character/place name and then invent them?
Character names are decided as I write. They just come to me naturally, as if the characters introduce themselves to me. The same applies to places. They come out of the story itself or are inspired by a character and his/her personalities and actions. Certain types of personalities call for certain scenes and locations, which enhance their image.

Have you ever based characters on people you know or based events on things that have happened to you?
The events and situations described in 'A Tricky Game' book are taken from the real life and are based on my own experience. Therefore all the characters are real people I know or have come across at some point of my life.  For example, an aluminum magnate, Kazimir Stankevitch is based on my business partner, whom I used to do business with in Moscow; a Swiss gentleman, Jacques Moreaux is partly based on my grandfather and partly on a Swiss acquaintance of mine, who lives in Montreaux, Switzerland, he owns an extensive collection of Soviet art and used to produce an underground art magazine during Soviet times; a character of a young billionaire, Dmitry Voronov, has been inspired by an another acquaintance of mine: a young French wanna-be musician from Cote d'Azure; and finally, Angela Moreaux is the woman I know the best because she is partly drawn from me.

Is there a certain Author that influenced you in writing?
There are two authors in particular who have influenced me, if not in writing then in approach to writing: Anton Chekhov, one of the greatest writers of short stories in history. He used to say: 'Brevity is the sister of talent'. And an English author John Fowles, a master of mystification in modern literature.

Are there any New Authors you are interested in for us to watch out for?  Why should we watch out for them?
There is one new author in particular, David Wallace Fleming, whose recent book 'Growing Up Wired' I very much enjoyed reading. I loved his modern approach to writing and of course I really liked the main character, Victor, who reminds me of Holden Caulfield from The Catcher in The Rye by J.D. Salinger.

Is there anything in your book you would change now if you could and what would it be?
Yes, there is, or rather, there was as I have re-written the first version of my debut novella. In particular, there was a certain character who had too loud a voice and took too much space in the book preventing other characters from acting out their roles. In the second edition of A Tricky Game I diminished his role as well as drew clearer links between the events and explained certain mysteries better as for some readers it appeared too hard to draw conclusions since the information presented in the original version was not sufficient enough.