CHARACTER BIO's - BEYOND THE EYES BY REBEKKAH FORD 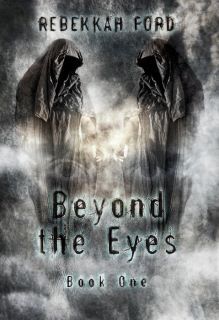 
Paige Reed: Paige is an only child. She’s five foot three, has long, straight dark red hair and dark green eyes. She has a story book type of beauty. Presently, she’s 18 years old. She’s into punk, trance and alternative music and has a black Morris Mini vehicle.
Paige was born in Phoenix, Arizona and had her first premonition at the age of four. Shortly after, her father died, devastating her and her mom. After her father died, she moved to Astoria, Oregon with her mom. Six months later, Paige met Carrie, Brayden, and Jack (A.K.A. Tree), who she grew up with and became her best friends. As Paige got older, she saw less and less of her mom, adding to her abandonment issues and thinking something must be wrong with her. Paige and Brayden dated for almost two years, until he moved to California, which crushed them. Despite having wonderful friends, Paige is a lonely and broken girl-until she meets Nathan who not only helps her deal with her emotional turmoil, but is part of her destiny. Paige has extraordinary abilities she’s still discovering, and the decision she made with Nathan changes her life forever.
Carrie Jacobson: Carrie is the only child. At present time, she’s 18. She’s five foot five, has shoulder length dark hair with red tips. She has brown eyes and a sprinkle of freckles across her nose. She has a punk/Goth style to her. She’s a blunt person, meaning she’ll tell ya like it is. Paige is her best friend. She would do anything for Paige. She’s dating Tree and works at her mom’s antique store.
Jack (A.K.A. Tree) Stein: Tree has an older brother who is already married. Tree is 18. He is of German descent and can speak it. He’s six foot five, but appears taller because he’s built like a bouncer. He has a dark, bitchin’ Mohawk and brown eyes. He’s into punk, alternative, and heavy metal music. He plays guitar and is into comic book heros. His dad is the top mechanic in his town (Astoria), and Tree works for him. Tree is dating Carrie. He’s always looking out for Paige. She’s like a sister to him.


Brayden Blackwater: Brayden is six foot, has a lean muscular body, black hair that’s messy on the top and green eyes. He’s 18 and in love with Paige. He believes they’re destined to be together. He will not give up on that belief. He’s best friends with Tree, Carrie and Paige. He doesn’t like Nathan at all. He’s jealous of him. Brayden’s dad had cheated on his mom, which caused him mom to relocate them to California, forcing Brayden and Paige to break up when they were 15. However, two years later, Brayden comes back.


Anwar- He’s over 600 years old. He’s a bald African that’s almost seven feet tall and has a slight African accent. He can see auras and is sensitive to the energies in the world. He has a grace about him and is intelligent and humble. He once helped Nathan’s family on the farm in Missouri.


The "old one"–He’s a dark spirit and over two thousand years old. He likes in inhabit dark haired guys with blue eyes. He’s after Solomon’s ring, which along with Solomon’s incantations, gives the wearer the power to control the dark spirits. Paige is the one who can find it for him.


Aosoth (the ‘old one’s’ sidekick)–She’s over two hundred years old. She likes to inhabit whatever vessel suits her mood. She’s a cold-hearted bitch, self-absorbed, arrogant, in love with the ‘old one’, jealous, a bit nutty, and will stop at nothing to get what she wants. She hates Paige and has destroyed Paige’s family.


There are other characters as well, but those are the main ones in the first book (Beyond the Eyes), who continue on into the rest of this trilogy.