QUOTE FROM MACMILLAN
"As the power of the YouTube generations continues to soar, Marianne Levy's hilarious new teen novel, Accidental Superstar, explores the perks and pitfalls of a sudden rise to internet fame - with laugh out loud consequences! Warm and witty, Katie Cox is the new heroine on the internet block and her antics will leave readers belting out ballads and perfecting their pitch, as they follow her journey to stardom." 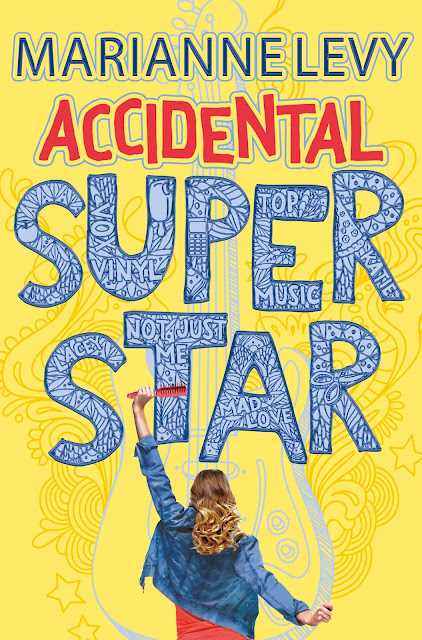 BLURB from Goodreads
If I'd known that two million people were going to be watching, I'd probably have done a bit of tidying up.Katie Cox is used to going unnoticed, by her mum, her dad, even her best friend. But when a video of her singing in her bedroom goes viral, she becomes a superstar overnight. As the views skyrocket and a recording contract beckons, the real world starts to feel very far away.And now Katie's riding high on her new found fame. But the higher she goes, the further there is to fall...Accidental Superstar by Marianne Levy is the first in a hilarious series about a girl who accidentally finds fame singing online.

Marianne Levy spent her twenties as an actor. She was in various TV Shows, she did some comedy on Radio 4 and had a brief appearance in the film "Ali G In Da House" and she actually managed to forget both her lines!
Marianne then worked as an announcer for Living TV, where became obsessed with America's Next Top Model! She has also been the voice of a leading brand of make up, a shopping centre and a yoghurt. Marianne Levy is the author of the Ellie May young fiction series for Egmont publishers, and is also a regular contributor to the Independent on Sunday. Marianne lives in London with her husband, daughter and a bad tempered cat! Accidental Superstar is her first novel for older readers.