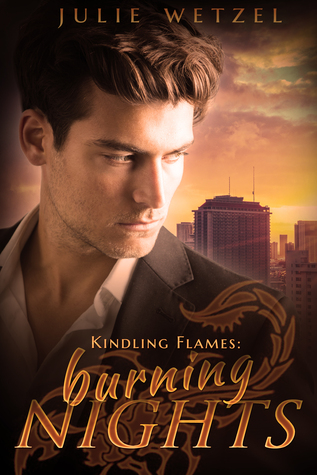 BLURB supplied by Xpresso Book Tours
After a wedding filled with werewolves, fay, and vampires, Vicky is looking forwards to a nice, quiet honeymoon away from the chaos of Darien’s daily life. But nothing is ever simple with an Ancient Vampire around.
When the Vampire Council of Hawaii finds out Darien and his new bride are coming, they are determined to see that Darien is honored properly. But vampire etiquette isn’t for the faint of heart.
The nights could burn when lines are drawn… and Darien finds himself in a turf war he never intended to start.

The queen’s eyes ran over Vicky’s slightly rumpled hair and missing veil. They landed on the beaded headpiece on the dressing table. “Is this what you plan to wear?” She went over and picked the veil up.
Vicky turned to watch the queen as she moved. “It was,” she admitted.
Lady Aine clicked her tongue disapprovingly. “This will never do.” She chucked the headdress across the room.
“Hey!” Vanessa protested and went to retrieve the discarded item.
Ignoring her, Lady Aine turned to look at Vicky. Reaching up, the queen started ripping pins out of Vicky’s carefully styled hair. Once it was free, she ran her fingers through the locks, sending them bouncing around Vicky’s shoulders in tight curls. With a flick of her hand, Lady Aine sent a wave of magic tingling over Vicky’s skin that solidified into a shimmering veil. Stepping around the still bride, she ran her hand up Vicky’s back, bringing out the wings Darien had worked so hard to remove. Finally, the queen ran her hand down the front of Vicky’s gown soothing her upset stomach. Once done, the queen stepped back and smiled at her work. “Much better.” Reaching out she took Vicky by the shoulder and turned her around. “Look.” She held her hand out towards a mirror that was set up next to the dressing table.
Vicky stared at her changed reflection in the glass. She was more beautiful than she thought possible. Her skin and hair glowed while the wings sparkled in the soft light of the room. Her jaw tightened in aggravation, and she took a deep breath trying to squelch the bitterness rising in her. The queen had just given her something without asking for some form of compensation. After her many dealings with the fay, Vicky knew this was rare, but she couldn’t accept the gift as it was. “It’s not that I don’t appreciate what you’ve done,” she said, trying to choose her words carefully, “but did you have to add the wings?”
“It would be a disservice if I let you out in anything but your finest.” Lady Aine smiled as she rubbed her finger against the sensitive membrane. “I think they are most fitting for one of my court.”
Vicky shivered at the touch. “But, I’m not of your court,” she protested, turning to face the queen.
“Oh, dear lady.” Lady Aine’s grin widened as she drew a finger down Vicky’s jawline. “You are still more than half mine.” 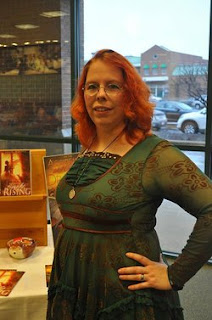 Originally from Ohio, Julie always dreamed of a job in science. Either shooting for the stars or delving into the mysteries of volcanoes. But, life never leads where you expect. In 2007, she moved to Mississippi to be with her significant other.

Now a mother of a hyperactive red headed boy, what time she's not chasing down dirty socks and unsticking toys from the ceiling is spent crafting worlds readers can get lost it. Julie is a self-proclaimed bibliophile and lover of big words. She likes hiking, frogs, interesting earrings, and a plethora of other fun things.

And with the Kindling Flames series, she is now an Internationally Best-Selling Author.

What are 10 fun facts about you?

ONE
I am the middlest child of four. I have an older sister who photographs marathons, a younger sister who locks people in a room and laughs at them while they try to escape, and a baby brother also in the Navy. My brother is currently serving aboard the USS George HW Bush (CVN 77).

TWO
I am terrified of living spiders, but I have spiders on everything. Earrings, necklaces, shirts, table cloths, and many other things. I figure if it terrifies me that much, I need to immerse myself in it. Same thing with zombies.

THREE
I have been accused of being a ‘well of useless knowledge’.  If you give me a subject that isn’t too specific, I can probably come up with some fact about it. I pick up little things everywhere and stuff them away for later use. Make me a real contender in Trivial Pursuit.

FOUR
The author picture in my books was taken during a Tiger Cruise aboard the USS George H W Bush with my sister. When the ship came back from her maiden deployment, they arranged to host members of the sailors’ families for a few days as they sailed up the east coast. They picked us up in Mayport, FL and took us up to Norfolk, VA. That picture was taken as we crawled through the floor hatch after going down to look at the bilge.

SIX
I love Halloween! Ghosts, ghouls, goblins, and anything creepy. Vampires are my favorite, but any monsters are welcome. Just please, keep me off the menu. Thanks

SEVEN
I’ve only been writing for a few years now. This whole thing started in 2011 when my sister wanted us to send her the stories. She was deployed at sea and couldn’t get online to read her fan fictions. So, instead of her strange mashups, I decided to write her stories. Things got out of hand from there.

EIGHT
I’ve broken nine bones. My aunt punched me in the face during a self-defense class and deviated my septum. I took a fall wrong in Jujitsu and broke my thumb. A friend tightened my corset wrong and broke a rib (yes you can break bones wearing clothing wrong). I walked into a doorway and broke my nose again (that does count as twice). I was rough housing with a friend and took a knee to the chest breaking a rib on the other side. I fell off a cooler at work and broke my fibula (no I was not drunk or drinking, I stood up on it to hang a sign and it rolled).  Finally I rolled my car in the waterworks curve of I-55 in Jackson, breaking my manubrium and crushing the t3 and t4 vertebrae. And of those nine bone, not one plaster cast for my friends to sign.

NINE
I can’t get to sleep if my feet are uncovered. I have to have them tucked in no matter how hot it is. I know it’s weird, but I’m still afraid that something under my bed is going to crawl out and chew on my toes while I’m sleeping (Hey, it could happen, you haven’t seen what’s under my bed!).

TEN
I can not sleep in a room with a closet door open. My imagination runs away from me and I can see eyes watching me from that crack. It doesn’t help that Krys has several xenomorph statues tucked away in the top of the closet. Those things creep the hell out of me! And no, he is not allowed to put up the life size poster on the back of the bedroom door!