REVIEW - THE BENDERS - THE BREEDERS SERIES BY KATIE FRENCH 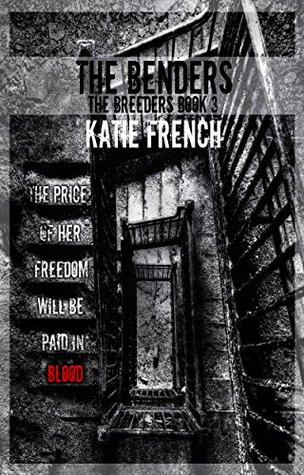 They’ve broken out of the Citadel.

Now, after all they’ve been through, Riley, Clay, and Ethan know one thing for sure: nothing tastes sweeter than freedom. And no one can rest easy with Auntie Bell in bondage. The group journeys home to rescue her and liberate Clay’s town from the cruel Warden. But when an ally betrays them, they must face the very enemy they’ve been trying to avoid.

Captured and separated, Riley is sold to a slave-owner who uses human beings for sport, while Clay and Ethan become the latest in a series of lab rats to be poked and prodded. As a slave, Riley conceals her identity to survive among the other benders, but it’s only a matter of time before a dangerous job takes her life. Clay and Ethan find themselves a war zone between a madwoman and marauders. And the odd don’t look good.

INITIAL THOUGHTS
I was looking forward to reading the next installment of the Breeder's Series but as it had been a while since I read Bk#2 The Believers in this series so the only thing I was wondering about was how quickly I would fall back into the series and if I would forget any of the important details.

MY REVIEW
I purchased this one from Amazon UK back in April 2015 and its just taken me an age to get the time to read and review it.
The cover features staircases within a warehouse that features near the end of the book? Or perhaps a it's a scene of a broken down house that was once a treasured home to a family. Either way it sets the tone of the book really well. The cover looks grim and in this book things begin to look quite grim for both Clay, Ethan and Riley.
So would this cover make me pick this book up from a bookstore shelf? As I love the dystopian genre and usually can't resist browsing those shelves in bookstores I reckon I would definitely pick this one up to learn more about it. So I guess the cover does its job well.
So my only worry had been forgetting anything from book two The Believer's, I needn't have worried as there is a great recap at the very beginning of this book. After reading that it felt as if I had only just put book two down! To say this book is action packed and fast paced is an understatement. This book is told mostly from the points of view of Clay or Riley but there is some from Ethan's point of view too which I really enjoyed, as well as it fitting in really well with the telling of the story. I enjoy the writing style of Katie French, she really makes you visualise the scenery that is around the characters she writes about. For example, "The plane looks like an eviscerated chicken carcass with the meat picked off"
Katie is also good at making you care about them and understand the actions and decisions the characters make and why they make them. I loved the description of how Clay felt at one point in the book, "Needles the size of drinkin' straws seem to be wormin' their way through my grey matter" Katie is absolutely brilliant at building up the tension with one character and then quickly shifting to what is happening with the other character too. She really keeps you on the edge of your seat. The ending of the book leaves you a little up in the air, whilst making you think "Oh wow" and "what is going to happen next" as well as "what more can these characters take?" There really are some fantastic descriptions that I think everyone can relate to and imagine such as  "Some run around like candles on legs" and "Stubborn as cement shoes"
Clay has talked Riley and Ethan into believing he still has friends back in his old town and he simply needs to turn up to lead the revolt against the Warden. Sadly things don't go to plan in fact they go downhill rapidly with Clay and Riley being separated once again. That's when the book slips into the two stories, Clay, Ethan and a well loved earlier character, Betsy, returns though she has been damaged almost beyond recognition. It is Clay's somewhat deranged mother, Nessa,  that has been doing experimental operations on Betsy! Betsy is tasked with keeping an eye on both Clay and Ethan. Nessa seem's determined to recreate Clay's old room where he lived with his father. In fact she has looted his old home down to the smallest detail. Nessa also operates on Clay's hand, improving it's function, so she is totally nonplussed when Clay doesn't run into her open arms being grateful. Nessa is further annoyed when Clay does not accept her deception in styling, dressing and calling Ethan by his younger brothers name Cole.
All the while the boys are going through this Riley has been taken to a bullet factory owned by a man who call's himself Lord Merek. Lord Merek dresses in old fashioned finery and has many wives. When Riley is examined by the doctor of the compound "Doc" she has a difficult decision to make. Come clean as a female and end up as Lord Merek's next wife, or hide amongst the workforce of the compound made up of benders. Riley meets back up with Nada, a bender whom Clay and Riley rescued from a trader. It turns out Nada is the adoptive sister to Doc so kind of useful to know. Nada and Riley are assigned to work in the gun powder section, the most dangerous job. They realise how dangerous it really is when another bender dies in an horrific way right in front of their eyes. So it's understandable they put their names forward for the Tournament that Lord Merek announces. The tournament will have hand to hand combat, and need wit, speed and skill to survive and win it. The person who wins will get to take one other person with them and be given their freedom.
So as you can see there is oodles of action, and a super fast pace in parts. I feel I could talk forever about this book and only just scratch the surface! Secrets are revealed, lives are sacrificed, those whom you thought would never survive do so. This book is a great addition to a so far brilliant series. I highly recommend this series of books.
So did I enjoy the book? I loved it from the first page to the very last!
Would I recommend the book? A must read for a fan of this series. If you haven't started the series I recommend that you do.
Would I want to read more of this series? Oh yes, definitely!
Would I want to read more books by this author? I would certainly take notice and have a closer look at books by this author.

FINAL THOUGHTS
How much more can these characters go through? What's going to happen next? Will the characters be reunited again soon? Love the series and can't wait to read more.
Posted by Jeanz xx at 11:00