RELEASE DAY BLITZ - EVERY CHOICE - EVERY SERIES BY SAMANTHA REY

Cassie Whitlock has relived that day countless times in her dreams for the past four years. It left more than just physical scars, it has caused her to close herself off to everyone. She no longer believes in love. Love only ends in pain.

That’s why when she meets Luca, she is surprised by the immediate and undeniable attraction between them. She doesn’t want complicated and she knows he’s about to make everything complicated. As their lives become more intertwined, it becomes harder to hide her secrets, and harder to resist him, but when she discovers he has secrets of his own, she begins to question everything. Cassie has to make a choice: hold on to the ghosts of her past or be brave enough to imagine a future.

“You don’t know what you’re talking about,” I said.
Luca smirked. “You tell me that a lot. But the way I see it, I know exactly what I’m talking about and you don’t like it. You can’t stand that I get under your skin and you can’t stop thinking about me.”
He was closer now and I desperately needed him to back up. He was right about everything, and when he was that close, it made my brain stop working.
“You are an arrogant son of a bitch.”
“Throwing insults at me won’t make me oblivious.” He leaned in closer and whispered in my ear. As I felt his breath move the small hairs falling onto my cheek, a tremor ran the length of my body.
“Don’t think I haven’t noticed how your body reacts to me.”
“Fuck you,” I spat, although it came out breathier than I had intended.
“You wish, Cassie,” he laughed quietly as my mouth hung open. He ran his thumb along my bottom lip as his fingers lifted my chin. “But I meant what I said before, I don’t do emotions.”
His touch went straight to the spot between my legs and I was suddenly thankful that the door was at my back, propping me up and keeping me from becoming a puddle at his feet. It took all of my energy not to arch off the door and push our bodies together. My hands were trapped behind my back so they couldn’t reach out and pull him to me. My body was a battlefield of turmoil; I despised this man yet I couldn’t think of anything that would feel better than him at that moment.
His eyes had grown darker in the past few minutes, becoming a dark navy that wanted to swallow me whole. Just when I thought I wouldn’t be able to last another second, he stood up and started to turn back to his things by the stairs.
I felt his loss instantly and without permission, a strangled cry broke through my lips, “Luca!”
My shout still echoed in my ears as he pounced and my back hit the door with a loud thump. The breath that was knocked out of me at the impact was swallowed up by Luca as his lips crashed into mine. I opened my mouth without much resistance and let his tongue invade. I wasn’t thinking anymore, I couldn’t think. Every part of my brain had shut down except the part that was tuned in to Luca and what his touch was doing to me.
I felt as if energy was exploding at every point where we were connected. His hands grabbed my cheeks as he tilted them sideways, completely in control. His fingers tangled in my hair and pulled slightly to get my head tilted up higher. He was so much taller than me, but it didn’t matter at that moment because we fit together perfectly.
My small fingers wrapped around his wrists as if holding on to them made it seem like I still had some control over what was transpiring. Every moan I unconsciously made was claimed by Luca and only seemed to spur him on. It was as if I had been starving for days, years even, and a banquet dinner was displayed in front of me with everything I had ever wanted. Something in the back of my mind told me I was going to regret gorging myself like this, but it was silenced as Luca’s hand slid from my hair down to my breast.
My nipples were tight and pushing against the silk of my bra uncomfortably. He pinched and a shot of pain ran deliciously straight down. He seemed to know exactly how to push my buttons to have me begging in no time. Everything I swore I would never allow myself to do with him was suddenly all I could think about doing.
His teeth tugged on my swollen bottom lip as he broke off the kiss without warning and dropped his hands from my body. I was pretty sure I made a whimpering noise that I should have been embarrassed about but again, that part of my brain had been shut off.
Breathing as heavily as I was, he looked me straight in the eye and a small smirk played on his red lips. “If you decide to forfeit the war, you know where to find me. Otherwise, your move, sweetheart.”
He turned his back on me, picked up his bag from the floor, and disappeared through his door without a backward glance. I was frozen in disbelief. It was the second time Luca had blown my mind without much more than a kiss and then left me wanting.
And it was the first time I realized I was going to inevitably lose the war. 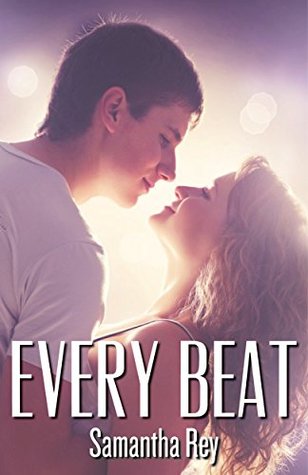 BLURB by Reading Addiction Blog Tours
Sadie Vaughn knows all about heartbreak. Her heart is so fractured that she has walls built up around it thick enough to keep everyone out, which means at least she won’t get hurt again. When her roommate, Henley, takes her on a tour of her new campus, Sadie literally falls into the arms of a devastatingly handsome stranger. She tries to ignore the feelings that have been awakened in her, but when she meets him again, she realizes she’s losing the battle. To make matters worse, the brooding boy in the back row of her literature class stops her heart and makes it beat faster at the same time, even when he completely ignores her. She had all intentions of focusing on her studies and refusing relationships, but she finds herself in situations where she is unable to help herself. Her past may have created the fears, but now she must decide if she is going to face them.

Samantha Rey graduated from the University of Mary Washington in Virginia with a degree in theatre and a Master’s in elementary education. While her full-time job is currently teaching third grade just outside of Washington, D.C., her love of theatre, entrancing characters, and never-ending drama has not subsided. She has always loved creating stories and the Every series is culmination of a lot of hard work and following her dreams. When she is not writing, she is reading way too much, choreographing musicals, grading papers, and spending time with her husband and their dog, Paisley.

5 Kindle copies of Every Choice