It's a bit of a "Novella Review Day" today,
This novella review is for
My Daylight Monsters from the Mary Hades Series 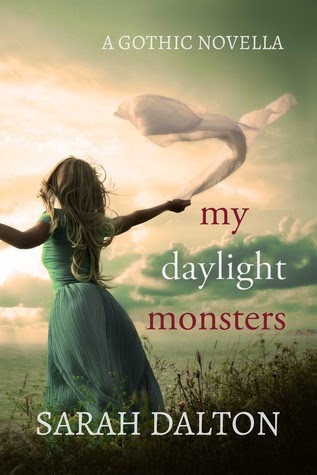 BLURB from Goodreads
I always thought my demons came out in the day, rather than at night. I’ve never been scared of the dark. I’ve only ever been scared of real things: getting ill, having injections, physical pain… death. Those are my monsters, not ghosts or vampires or whatever else can hide under your bed at night.

The dark makes everything worse.

When Mary’s psychiatrist advises a short stay at a psychiatric unit, her worst nightmares are confirmed. How can she get better in a place that fills her with dread? When she meets the other patients, she begins to gather some hope, until she realises that the death toll in the hospital is rising without explanation. Something sinister stalks the corridors and maybe she is the only one who can stop it…

Mary has to confront the Things that she sees if they are to stand a chance. But will she survive a confrontation with death itself?

INITIAL THOUGHTS
I decided to read this novella as a distraction from another book I was reading and having problems getting into. I have been wanting to try reading something by Sarah Dalton for a while, I do have the first book in her The Blemished series sitting on my kindle awaiting me reading it. When I saw this novella and the first book of the Mary Hades series available on Netgalley I couldn't resist, so I requested them and received them within a few hours. I honestly don't usually read "horror" as a genre but there was something about this series drawing me to it. Which is why I decided to read the novella as an introduction to the series.

MY REVIEW
I received a free e-copy of this novella via Netgalley in exchange for my honest review. The cover features a young female looking out over a field, with a rather stormy looking sky, flinging what looks like a wrap or shawl of some sort in the air. Would the cover make me pick up the book in a book store? I think I would pick it up to learn more about it.
The main character is Mary Hades, her parents are taking her to hospital. Both her parents and Mary are worried about her going into hospital they know she needs to go in because of how she handled what is referred to as an "incident", she hasn't been "right" since. Mary has "visions" and is naturally very scared of them. The visions come along in the day time too, not just at night. Mary is going to be staying on the Magdelena Ward whilst her medication is worked out. Mary meets the other teens on the ward who have a wide variety of "problems from Yasmeen and Anka who are anorexic, Helen, a depressed over eater to Natalie who regularly attempts to commit suicide, and some of the male teens are Frankie who just screams and screeches out for no apparent reason and Tom who has a borderline personality disorder. They all have their own issues that they are trying to learn to live with by spending time on the Magdelena ward at the mental hospital. The main nurse on the ward is Nurse Frances Granger, she attempts some humor to appear to be "down with the kids" on the ward. Mary's bag is immediately removed even though her mother insists that it doesn't contain anything Mary could harm herself with. The hospital still goes through the bag. Mary says a difficult goodbye to her parents with the promise she can just stay for the one week. Nurse Granger shows Mary around the ward, the community area, the therapy rooms, and the hatch where Dr Gethen hands out everyone's medication from. Then Mary is shown her room that she has to share with Lacey Holloway. Lacey is manic and talks non stop, never even giving Mary time to talk, not that Mary wants to talk.
Mary finds some of the other patients really odd, the way they are playing a game with chocolate and crisps as currency. Mo seems to be in charge of the game that is being played. When Mary asks more about it, she finds out that they are guessing about how many deaths there will be in the week. as the Magdelena Ward is opposite a palliative care ward. Mary thinks the occupants of Magdelena ward all seem to have a camaraderie and a morbid sense of humor, but Mary does fit in quite easily. I also enjoyed the interactions between Mary and Johnny, though I did guess what was so "special" about him before it was revealed in the novella.
As I have said previously within this review the book is very different to my normal reading, but I did find myself really enjoying it. Sarah Dalton's description of the dreary, gloomy looking hospital as Mary views it through the pouring rain really has you visualizing it. The detailing within the description of how her mum uses an umbrella in the rain, yet her dad just sort of hunches over and pulls his jacket collar up as men do when its raining heavy. I grew attached to Mary's roommate Lacey, the way she talked and talked constantly, making up for how quiet and withdrawn Mary can be.
So did I enjoy the novella? I really did enjoy the novella from beginning to end. The novella definitely made me want more. .  Would I recommend the novella? Yes, even if you think it's not your usual reading comfort zone , give it a try. I wasn't sure I would like it with it being categorized as horror and I ended up being pleasantly surprised. Would I want to read more of this series? Undoubtedly yes. Would I want to read more books by Sarah Dalton? I am absolutely going to checkout her dystopian series called The Blemished as well as more of this, Mary Hades one too.