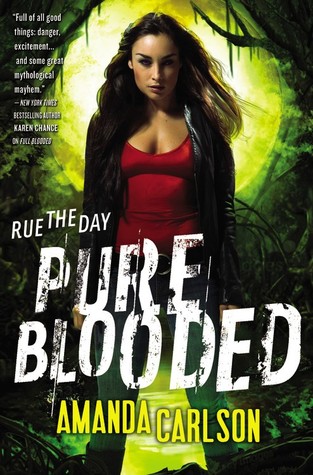 BLURB from Goodreads
Jessica arrives back from the Underworld to find her father embroiled in a battle against the Made wolves. She and her crew drop everything to join them.Once she arrives, the threat is after her. Jessica is lured into danger when her adversary takes something precious from her. With help from an unlikely source, Jessica goes up against her creator in a battle that will decide the path of everyone involved. She must war against a new set of foes, ones who could not only steal her power, but could take her soul as well.

INITIAL THOUGHTS
Approaching reading this book, the fifth in the series I am looking forward to catching up with Jessica and Rourke. I also want to see what happens with Jessica's father and the problems of the rogue pack too.. . .My only worry is will I remember the key events from the last book as it feels like it has been such a long time since I read it

FINAL THOUGHTS
My final thoughts are numerous, consisting of the questions I have asked above as well as me looking forward to the Coalition and meeting the other members, the strong women, that will sit alongside Jessica on the council. We know one of those sitting on the council with Jessica is Eudoxia, the Vampire Queen so who are the others and how will they all work together? To sum up Slightly slower and a few pace changes made this one harder to enjoy initially. When the pace increased, and the plot became more complex I was drawn further into the book and loved it there was plenty of action, and battles to fight.
So did I enjoy the book? Yes, I loved it. Action packed, with hints of more to come in the following book/books. Would I recommend this book? Of course, I'd recommend this series .. . .and this Author. Would I want to read another book in this series? Yessss, please,when can I read it? This is the bit I hate. . waiting for the next book.
Would I want to read any other titles by this author? Yes, I have read the Sin City Collectors books written by Amanda too. I love how she writes and have read her Jessica McClain Series from the very beginning when I didn't even have a kindle and due to a medical condition I cannot read for long enough to read a book on a computer, and her PA at the time was so kind and printed the novella off and sent it through the post for me to read it. I have been a "super fan" ever since. I do consider myself a devoted fan of this author.
Posted by Jeanz xx at 12:00