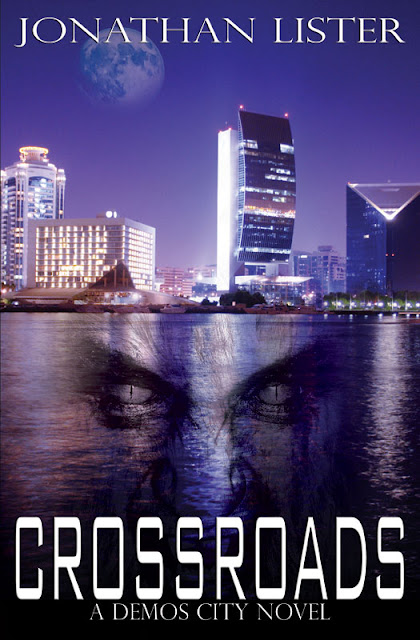 BLURB from Goodreads
Werewolf. Bar bouncer. Dad. Standard traits for any self-respecting, reformed criminal, living under the radar in Demos City. For Leon Gray, normal is what he wants — for himself and his not-yet-changed teenage daughter.Playing bodyguard to crusading reporter David Hastings would totally ruin Leon’s peace, especially since Hastings has hired killers on his trail, pros who know how he takes his espresso in the morning, and where Leon lives.The payoff, though, would fill up Shauna’s empty college fund, and in a battle between opportunity and ordinary, money wins. He just has to keep Hastings alive long enough to cash the check.If only he didn’t have to save his daughter, too.As a budding wolf, she’s piqued the interest of a local pack Alpha — one Leon knows will steal Shauna right out from under him the first chance he gets.Leon isn’t about to give up on his daughter or Hastings, and will fight for both longer than it took Demos City to see werewolves as equals to humans.He can only hope it doesn’t take a thousand years. 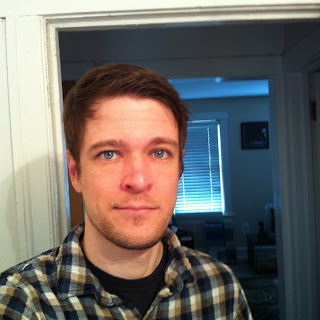 Jonathan Lister is a full-time writer with work appearing in outlets of USA Today, The Houston Chronicle and many others. A graduate of the Jack Kerouac School of Disembodied Poetics at Naropa University, he’s waited an unspeakable amount of tables en route to having the career he wants, and the ability to the tell stories he loves. Crossroads: a Demos City Novel is Jonathan’s first book-length work of fiction. He currently lives in the Philadelphia area and continues to drink too much coffee.

What is the name of your latest book, and if you had to summarise it in less than 20 words what would you say?
Crossroads: a Demos City Novel is the story of Leon Gray, an ex-con trying to raise his teenage daughter Shauna while dealing with a troubled past that won’t let him go.
Leon and his daughter are werewolves, and they live in a world where their kind has existed amongst humans since the dawn of time. All history bends to include them – wars, laws, tax brackets, supermarket aisles. That was longer than 20 words – what’s the penalty for going over?

Do you basic plot/plan for your book, before you actually begin writing it out? Or do you let the writing flow and see where it takes the story?
The Demos City Series has suspense and thriller elements to it, so that vein demands a degree of planning to make certain the plot points line up correctly. Otherwise, the characters might spill the details before the appropriate time, and that’s no fun. I begin with a rough chapter framework and let the characters play in those spaces. More than once while writing Crossroads, a character would propose a different choice that I hadn’t considered, and a whole new avenue would open up in the narrative.

What do you think makes a book a really good/bestseller ?
Marketing. I don’t care how well a story is written, if no one knows it’s out there, it won’t succeed. Social media is so vital to the success of any work in connecting with an audience and really getting to know them and vice versa. I love it when people comment on a blog post or connect on Twitter or shout at me from moving cars. A big publisher helps too, but that’s just for the financial weight to get good advertising and exposure. Some writers use only Facebook and Twitter and sell millions of copies. It’s a magical formula, though. No telling when you’ve got the right amount of exposure until it explodes.

Do you have anybody read your books and give you reviews before you officially release them? ie. Your partner, children, friends, reviewers you know?
I am fortunate to have a publisher and the glorious editing team that comes along with them. Apart from the on-page help J. Taylor Publishing provides, I tend to bounce things off friends and family while on the phone or warming myself in front of a glass of wine. It’s more a conversation about ideas that morphs into potential plot points or character ideas. My brother is an especially valuable sounding board. If something just flat out stinks, he’ll tell me with no qualification. He’s also much more read than I am, which is kind of ironic given that I have two degrees in English and writing.

When did you first consider yourself as a "writer"?
Third grade English class. I’d written a Halloween story involving a pair of hunters to go to this rundown old castle to kill a demonic wolf that haunts the area for a seasonal project. You know the one the teacher gives because the lesson plan is over and she just wants a break for an hour? Well thankfully she gave me an A+ (literally the only way I passed the class that semester) and asked me to read the story for the class. As embarrassing as the attention was for me at the time, it also gave me this adrenaline rush knowing that I’d done something cool, that kids around me liked.

Are there any hidden messages or morals contained in your books? (Morals as in like Aesops Fables type of "The moral of this story is..")
Werewolves in the Demos City Series function as a kind of ethnicity or race to show the underlying oppression of being a minority. Humans outnumber wolves in the city by a large percentage. In any society, the majority always tries to keep those different from them or from smaller groups, down in some way, whether it’s outright racist laws or unspoken discrimination. Underneath the noir thriller that’s the central plot of the story, there’s a message that we still fear and attempt to constrict the things we don’t understand.

What can we expect from you in the future?  ie More books of the same genre? Books of a different genre?
The second installment in the Demos City Series is already written. It’s tentatively titled “Bullet” and it’s in the earliest stages of review with the publisher. For anyone picking up the first book, be confident. There’s more coming and I promise you’re really going to dig it.
I mean, I hope anyway right?
I’ve also got a number of other projects in the works, probably in the same urban fantasy genre, that I think could tell some humorous stories about aging and how we come to terms with our older, noise-making bodies. 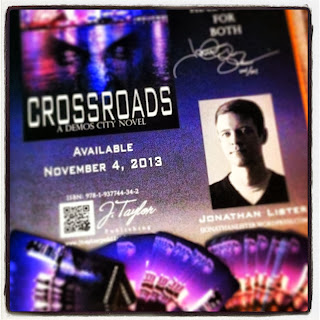 ONE
The Bouncer
‡
Breaking a beer bottle over someone’s head rarely knocks them unconscious. Oh, it’s going to hurt like hell, probably make a good-sized gash in the scalp but hardly ever just a quick dose of shut-eye. What they’ll end up with is a wound that looks a lot worse than it actually is. The best an opponent can hope for is the element of surprise and the moments of disorientation that the hit causes. If the bastard is serious about it, he can use the jagged edges of broken glass to do some real damage. A shame this isn’t a Western. When a beer bottle connects with a cowboy’s head in one of those old movies, he hits the floor in a few seconds.
I’m not a cowboy. I’m something else.
“Gray! Watch out!” Jenny shouts from behind the bar, but I already know Frank is coming. Guy lost his job last week—ten years as a call center supervisor. He’s been in here every night since. Now he’s drunk enough to think I’m the reason his company shipped his job off to the Philippines.
It’s taking him forever to swing that damn bottle at me; I’m getting bored.
He’s harmless on most nights, talks a lot about how he’d like to blow up his old work, but ends up passing out in his car. People in front of me are pointing and shouting over the din of music and bar talk, obviously trying to warn me. It’s the whiskey’s fault Frank is coming after me. That doesn’t mean I can make an exception. Everyone in here knows the rules, knows what’s coming.
The bottle connects with the back of my head and shatters. I don’t move. Broken glass sticks in my hair, even draws some blood. I let the pain run down my back along with the cheap beer and hold my breath until the shouting sting fades to a grumbling throb.
Yep—hurts like hell.
“Fuck you, Leon!” Frank shouts. His breath is acrid and brimming with rye as it washes over my neck. Its scent tells me how much alcohol is in his blood. In all the movies Frank has ever probably seen, it’s only supposed to take one hit, so I know he’s is waiting for me to fall down. In fact, he’s probably praying I fall because no way he’s got a next move planned.
A bar that was roaring with life a moment ago is all spectators, front-row seat types. Most everyone in here knows me, knows what I am. Frank does, too; it’s why he needs to quit the whiskey. The pool tables are quiet. No one’s playing darts, not even bringing glasses to their lips. There are no footsteps on the hardwood floors. The customers are all a mixture of bloodlust and pity, waiting to see what my first move is going to look like. The bell sounds in my head as I turn around.
This is the fun part of my job. 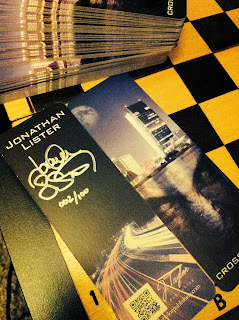