BLOG TOUR - HERS TO CHERISH - VERDANTIA BY PATRICIA A. KNIGHT 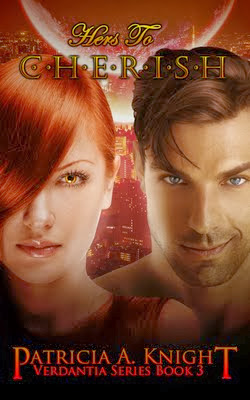 BLURB from Reading Addiction Blog Tours
When Ramsey DeKieran, disgraced nobleman and accused murderer, was offered a pardon Ram knew there'd be a catch. The High Lord of Verdantia offered him a clean slate in exchange for the off-world rescue of a Verdantian noblewoman – a suicide mission that had already cost the lives of good men. The one redeeming feature was the assistance of the stunning captain of Verdantia’s elite mercenary team.
For Captain Steffania Rickard, assisting DeKieran in the rescue of a woman critical to the future of Verdantia would be difficult enough. The rouge tripped all her triggers – good and bad. Infinitely worse, to fit into the culture of Vxloncia, she must pose as Ram's sex slave. The sexually dominant Ramsey was nothing if not perceptive and Steffania doubts her carefully disguised and deeply hidden desires will remain concealed.
Their mission takes on new meaning when they unmask a heinous program of enslavement, long cloaked in secrecy. Together they must find a way to overcome their initial animosity and recover a woman vital to the future of their race. Together, they would have to bring a malicious entity to justice.
In the maelstrom of sex, savagery, domination and submission, Ram and Steffania will need all their wits and strength to survive.

Patricia A. Knight is the pen name for an eternal romantic who lives in Dallas, Texas surrounded by her horses, dogs and the best man on the face of the earth – oh yeah, and the most enormous bullfrogs you will ever see. Word to the wise: don’t swim in the pool after I love to hear from my readers and can be reached at http://www.trollriverpub.com/ or  http://www.patriciaaknight.com . Or send me an email at patriciaknight190@gmail.com . Check out my latest “Hunk of the Day,” book releases, contests and other fun stuff on my face book page: https://www.facebook.com/patricia.knight.71619