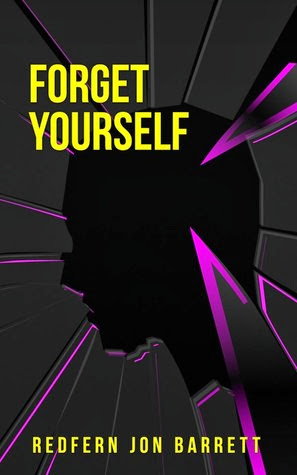 BLURB from Goodreads
"It is important that you know: I love you.Of course I have no idea who you are.But I have no real idea who I am either, so it seems fair to me."Blondee lives in a world without memories: just four walls, fifty huts and a hundred forgotten people. She came in with the food rations. Mind and body naked, like everyone. Now she lives in a triangular hut at the edge of everything. They say she was a thief — she has long fingers — and she certainly has a reputation for taking multiple lovers. But haunted by the ghost of a fat man and dreaming of a stone woman, Blondee knows she can reshape the world — she just needs to get the world to listen… 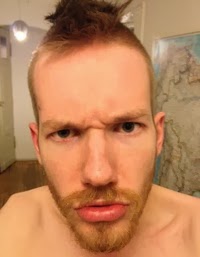 A manic giant with a PhD in queer literature, Redfern writes sci-fi, political rants, and polyamorous decadence. His works of science and speculative fiction have featured in A Cappella Zoo (2012; 2013), The Future Fire, and Corvus. He writes about cyberpunk for the online magazine Scifi Methods, and has written articles for Sleek, Gender Forum, and various polyamory resources. As an obsessive propagandist, he also has chapters in the books Witches/Sorcières (published by the Maison Populaire, Paris), and Shaped By Time (published by the Danish National Museum). Last but not least, his queer sci-fi novel Forget Yourself is now available on Amazon.Otherwise, he believes in free love (but not free markets), has two lovers (and three gods), and can currently be found in Berlin. Stalk him at redjon.com

What is your name, where were you born and where do you live now?
My name is Redfern Jon Barrett – I was born in Sheffield in the grey north of England, but my family moved continuously across the British Isles as I grew up – by the time I was 21 I’d lived in 21 different houses. I lived amongst the poverty and street preachers south Wales for 8 years before my partner and I packed our stuff into a van and drove to poor-but-sexy Berlin. That was 3 years ago.

Did you always want to be a writer? If not what did you want to be?
No, I didn’t. It’s something I never expected. I wound up doing a doctorate in Literature – I thought I’d spend my life studying novels, not writing them! But academia can be pretty rigid, and there was a point during my thesis where I just wanted to write whatever I wanted. So I wrote a terrible novel which I forgot about. But I kept writing – more novels, short stories, articles – and I discovered that people actually wanted to read them.

What is your inspiration?
Though I’ve written on several subjects, from capitalism to witchcraft, a recurring theme in my writing is weird and unique relationships. I’m polyamorous – I love more than one person at once – and that’s been a huge influence. I’ve also explored nonsexual love (a sort of ‘deep bromance’) and heterosexual queerness, which believe me, is not a contradiction.

What is the name of your latest book, and if you had to summarise it in less than 20 words what would you say?
My latest book is my experimental sci-fi novel Forget Yourself. So, in 20 words: it’s a story about Blondee, who wakes up in a small walled land inhabited by people without memories. I still have two left: gender twisting.

Do you have a favourite character from your books?
To be honest I’m pretty happy with Blondee, the protagonist of Forget Yourself – she serves as something of an ‘everyman’ character, whom readers can project themselves onto. In our culture most everyman characters are straight white men, so I felt that having a bisexual woman in that role was important.

How do you come up with character names?
The names in Forget Yourself are all reminiscent of the old world they no longer remember, and they all point to the different social classes which have been lost to them: Ketamine and Pilsner allude to substance abuse and an impoverished underclass, for example, whereas Burberry and Tie have names which point to a former life of wealth. There’s a huge difference between what we know their names suggest, and the actual position each character has in their new society.

Do you read all the reviews of your book?
As an indie author reviews are really important to me – I look forward to each of them. I actually make a weird sort-of squealing sound whenever one comes out. And I’m really grateful that so far they’ve been universally positive. For such an experimental book that deals with some controversial themes, that’s something I’m pretty damn thankful for.

How do you come up with the Title and Cover Designs for your book? Who designed the cover of your book?
Actually my boyfriend Darren Cadwallader designed and developed the cover art – he’s a web developer and designer, and he’s extremely good at what he does. He’s also+ been continuously and ridiculously supportive of my writing, and I’m proud just to know him. I’m also happy that the 7 years we’ve spent together have shown people we know that polyamory really can work – and that’s something I’ve wanted to project further with my writing.

Is there a certain Author that influenced you in writing?
Margaret Atwood and Jeanette Winterson, absolutely – especially their science/speculative fiction. Neither author actually specialised in those genres, instead they’ve been better known for literary fiction – but I think that’s why they make such damn good sci-fi and spec-fic writers. They each spent many years working on socially insightful commentaries before moving toward science fiction, and that’s what good science fiction should be – a reflection of our own world, and an extrapolation of what could be if we continue along certain trends. Science fiction lets us think about an analyse our world in a way which isn’t possible with other genres.

What can we expect from you in the future? More books of the same genre? Books of a different genre?
At the moment I’m working on several projects at once, at the expense of sleep and a healthy social life. Firstly I’m working on my latest novel Olympia: The Homosexual Republic, an alternative history tale of a gay country established in 1949. I’m also working on a zombie-themed ‘choose-your-own-adventure’ novel with the writer Asha Vose. The artist Heather Purcell and I are currently developing a live-illustrated short story performance. I’m also part of a group curating an art project for the NGBK institute here in Berlin. So I’m working on a few different genres, I guess!