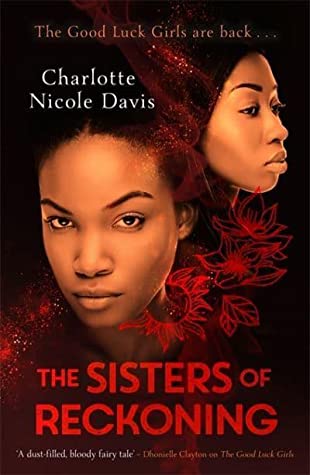 BLURB from Goodreads
The Good Luck Girls are free. Aster's sister and friends have new lives across the border in Ferron, while Aster remains in Arketta, helping more girls escape. But news of a new welcome house opening fills Aster with a need to do more than just help individual girls. And an unexpected reunion gives her an idea of how to do it. From there, grows a wildly ambitious plan to free all dustbloods, who live as prisoners to Arketta's landmasters and debt slavery.

When Clementine and the others return from Ferron, they become the heart of a vibrant group of fearless fighters, working to unite the various underclasses and convince them to join in the fight. Along the way, friendships will be forged, lives will be lost, and love will take root even in the harshest of circumstances, between the most unexpected of lovers.

But will Arketta's dustbloods finally come into power and freedom, or will the resistance just open them up to a new sort of danger?

REVIEW
I was really excited to read this second book yet at the same time I was worried that it wouldn’t live up to the first book in the series back in, 2019. I was also a little anxious as to whether I would remember who everyone was and what their back stories were but I need not have worried as I slipped easily back into this well created harsh world of the haves/have nots.

In this book as in the first book of the series the landowners are still ruling and having everything their own way, living in luxury on the shine they get from those that work for them that they give a pittance to survive on to, in exchange for a lifetime of servitude.

This book picks up about a year later, when the majority of the Green Creek Luckers have escaped and most have been smuggled to freedom and a new life in Ferron, only Violet who was caught by McClennon, and Aster who has joined the Lady Ghosts are not living their wished for, life of freedom. Aster is determined to help other Good Luck girls escape their lives at the Welcome Houses, but it still doesn’t feel like its enough to her. Sure, Aster is aiding the Lady Ghosts and girls are being smuggled to freedom, but only small numbers of them. Aster wants to make a bigger impact, to change more lives for the better. When she hears the news that Jerrod McClennon is in Northrock to make a large public announcement, both Aster & Raven disguised as fortuna’s go to hear first hand what the horrible man’s new venture is going to be. Aster is shocked to learn that he intends on opening a Welcome House right there in Northrock, so the men do not need to travel through the scab to enjoy the services of the Good Luck girls anymore. Jerrod McClennon talks about how accommodating and well trained these girls will be, how the new Welcome House Mistress is a fairblood herself and then to Aster’s horror he introduces the housemistress and it is Violet! Not yet recovered from the shock of seeing Violet again, Aster struggles to concentrate briefly but Jerrod McClennon hasn’t finished with his big announcements yet and Aster and Raven are further disturbed to hear that the Welcome House girls, Lucky Nights will now happen on their thirteenth birthday rather than their sixteenth as before. Aster also sees the shock and horror on the face of Violet, and makes her wonder if she new about the earlier Lucky Nights or not. Its then Aster decides she must see Violet as soon as she can.

I could talk and talk about the plot of this book with its subtle hints at what is to come woven in with action packed scenes featuring both old and new characters but I honestly do not want to spoil the unfolding of events for anyone reading this brilliant book. The writing style is once again amazing, the world cleverly built with its different people, Landowners, Dustbloods, Good Luck Girls, and Raveners all creating a tiered hierarchy of people. I thoroughly enjoyed how Aster brings together the different factions of people that are unhappy with the landowners who want to make a stand but alone in their smaller groups cannot make a large enough difference. With help from a source close to Jerrod McClennon, Aster and the Green Creek Girls hatch a plan where when all the factions work together, they may just have enough strength and power to bring the landowners down and change the unfair system.

I loved lots of characters in this book, the obvious ones being Aster and Zee. They both have to deal with those from their pasts and learn to come to terms with things they cannot change. Aster has come a long way from being a Green Creek girl, she has learnt a lot from the various Lady Ghosts, such as how to control her panic and stay calm using breathing techniques when in difficult situations, which she needs to use more than once in this book.

I also adored Eli, its clear to see he loves Aster but she still struggles with the closeness of a man never mind a touch of affection from one. Despite these she has two men sweet on her and vying for her attention. I have to admit I was on Team Eli and he was the one I desperately wanted Aster to have a happy ever after with. In this book Eli shows his emotions when Aster, Tansy, & Mallow are being escorted through the tunnels to Camp Deathstalker for weapons but, are attacked by angry vengeants. With Aster’s leg damaged and Eli’s chest it makes their mission even more difficult and slows down their progress leaving them less time to organise their plans of attack. It becomes apparent that Eli feels guilty about these vengeants, almost feeling he deserves to be attacked by them, as these vengeants are the spirits of the people he and the Scorpions tried to help but failed. Aster wants to comfort Eli, but is unsure how to without giving him the wrong impression and making herself really uncomfortable.

The descriptions in this book are so detailed they make the characters and surroundings easy to visualise. One I really loved, “Derrick had gotten in the middle of them like a stringy piece of meat caught between two teeth! I adored and yes had a tear in my eye when Aster had a farewell conversation with Priscilla, it’s clear Aster viewed her as a mother figure and vice versa. I also really liked the saying of “Wander Well” when characters were parting ways.

My immediate thoughts upon finishing the book were that the book was an amazing sequel to the fantastic Good Luck Girls bk 1 and that bk2 finished with a really fitting ending.

To sum up what more can I say? If you read The Good Luck Girls this sequel is an absolute must read, and if you haven’t yet read any of this series you seriously need to!!