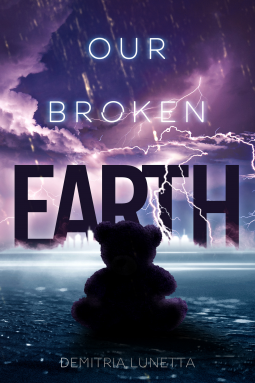 BLURB from Goodreads
In the near future, the tides are rising, the weather is out of control, and the rain is poison. Mal lost his family in a storm and now lives with other young people, trying to survive the changing world. Faced with the threat of the rising water and his friend's illness, Mal and his makeshift family must travel across the country to reach a safe place. But the road is dangerous and not all will find their way safely to their new home.

REVIEW
The strong cover drew me to this book, the strong striking lightening, the dark purple/black skies and the rain, makes it very atmospheric. Then there’s the lone teddy bear sitting out in the rain, Forgotten? Abandoned? Lost? This cover would certainly make me want to pick it up in a bookstore to learn more about the book. The genres listed for the book are poetry, (which as I have said I aren’t a huge fan of, but I really loved this book!), Teens & YA (well I’m in neither of those age groups but really enjoyed reading this). This book is also labelled as being a Hi-Lo read, in that it is high interest for a lower reading age, which I think anything that encourages people to read is a fantastic idea.

The book begins with explaining that the earth is not broken, but that we, the people that live on it have hurt it. We have used and trashed its resources so much that the world is now paying the human race back for their recklessness and wasting the reserves it provided us with. Now the world is angry, sending violent storms that cause floods and acidic rain that burns and poisons whoever it touches.

The main characters are living in a room within an apartment block, to protect themselves in the event of a flood. Jaynee, Kurt, Tia, Garret, Skye and the most central character Malcolm/Mal have all lost people, their families and friends. Malcolm and his family had a small house in Florida with strong walls and windows. They were careful with their food from boxes, jars and cans they had. They had a supply of bottled water to drink. Mal’s parents thought they were safe, high enough not to be flooded. Mal was just ten years old when a storm caused a large flood, and he was the only survivor from his family.

The other teens and younger children that were gathered in the apartment block had similar stories of tragedy and loss. They have banded together making their only little family, creating a safe place to live, but now the waters are rising more with every storm, they need to move on.

The story tells of their discussions and disagreements on moving, some deciding to stay where they are, not wanting any change. Then the arduous journey, the dangers from other people, even adults, wanting what meagre supplies they have scraped together.

Just when they feel they have arrived at a place of safety it appears that there is something sinister going on and this haven is not all what it seems.

Despite the book being described as being Hi Lo, (High interest, Low reading age) I became really engrossed reading it and I think a wider variety of people would love it as I did too. The book gets right into the story and pulls you in and keeps you held tight until you finish it.

To sum up the book is a powerful short story with a direct, hard hitting emotive message within it.