This weeks Wishlist Wednesday is
Defending Britta Stein by Ronald H Balson
Described as a story of bravery, betrayal, and redemption—from Ronald H. Balson, the winner of the National Jewish Book Award. Having read and been totally engrossed in The Girl From Berlin,
this latest book made it straight onto my Wishlist as soon
as I saw who wrote it! 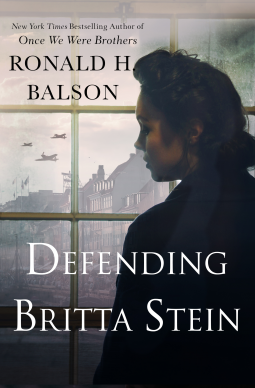 Britta Stein, however, does not. The ninety-year-old Chicago woman levels public accusations against Henryks by spray-painting “Coward,” “Traitor,” “Collaborator,” and “War Criminal” on the walls of his restaurant. Mrs. Stein is ultimately taken into custody and charged with criminal defacement of property. She also becomes the target of a bitter lawsuit filed by Henryks and his son, accusing her of defamation and intentional infliction of emotional distress.

Attorney Catherine Lockhart, though hesitant at first, agrees to take up Mrs. Stein's defense. With the help of her investigator husband, Liam Taggart, Lockhart must reach back into wartime Denmark and locate evidence that proves Mrs. Stein's innocence.
Goodreads Link
PURCHASE LINKS
Amazon US
Amazon UK
Link to my review of The Girl From Berlin by Ronald H. Balson here