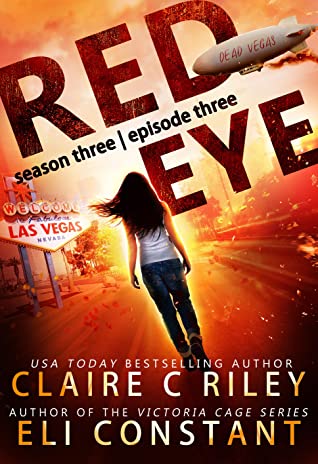 Title: Red Eye Season Three Episode Three
Authors: Claire C Riley & Eli Constant
Genre: Post Apocalyptic, Zombies
Release Date: 12th November 2020
BLURB from Goodreads
Sam and Rose have finally found each other, but a manipulative Barrett threatens their sisterhood. And on the horizon…the Sins, zombies, and a whole world of blood.
A new location brings new terror as Rose and Sam find themselves at the mercy of Barrett’s crew, the Sins.Now separated from both Sam and Nolan, Rose is a caged animal, terrified but determined to find the people she cares about the most. But how much can one person take?More than ever, Rose would give anything to be sat in a boring office back in England right now.Sam’s secret is never safe; that’s a reality she’s learning to live with. Barrett has protected her up until now, yet surrounded by his so-called family, she wonders how long it will be before he turns on her…Sam longs for the days when her biggest problems were a failed relationship, too many carbs, and a sprained ankle.Life has never been easy, not before the zombies and certainly not after. But even with the dead rising, it is the living that cause the most problems. It’s the humans that elicit the most fear, that make the apocalypse bloodier, that kill anyone necessary to survive.Between humans, zombies, and the desire for brains,the world’s getting darker by the hour.And the two unlikely friendsneed one another more than ever.That doomed red-eye flight seems a lifetime ago…
Goodreads Link
PURCHASE LINKS
Amazon US
Amazon UK
REVIEW
Once again as with all the episodes this one picks up from where the previous one left of. Rose has challenged Nathan to a fight in the ring in exchange for her friend’s freedom. Rose knows she will die if she gets into that ring with Nathan, he will take great pleasure in giving her a long slow painful death. Though Rose does think it would be like Nathan to let a zombie bite her and turn her into a mindless zombie, who he could put in the pit to fight many more times. Rose has accepted her fate whichever it will be.

Barratt has said he will come for her and aid Rose and Nolan in escaping the Sins despite him being part of the Sins brotherhood. He wants only one thing in return, for Rose to leave Sam behind to be alone with him. By this stage Rose is under the impression that Sam knew Rose was at the Sins encampment all the time and chose not to help her. Rose decides to leave Sam to her own fate with Barrett and make her escape and a life going forward with Nolan. However, when the time comes for Rose to be taken to the ring to fight Barrett hasn’t arrived for her. The man who had helped her through doing the ring duty and watching the previous ring fights called Elias is there. Luckily for Rose, Elias has decided to help her and Nolan escape, on one condition…..he goes with them until they are well away from the Sins group and their land.

In this book when it comes down to a life and death moment Sam literally goes all out Red Eye, zombie savage and rightfully defends herself but she does enjoy and willingly give herself over to her inner zombie perhaps more easily than she would have wished.

Without going into detail, let’s just say that neither grand escape plan goes particularly well or any way how it was supposed to. It does ends up with Sam and Rose being in a vehicle roaring out of the Sins encampment though.

It’s a shame that Sam and Rose’s close sisterhood relationship seems to have been irrevocably damaged by the very cunning Barrett. Rose has become very distant from Sam and whereas before she would have been quite tactile and not shy away when the monster in Sam came to the surface, now its clear Rose doesn’t trust Sam and seems to fear Sam’s zombie side. Though Sam is under no illusion, she knows Barrett had kept the news Rose was with the Sins from her. Sam really is hurt by Rose’s reaction to her.. especially after all they have been through. Sam is determined to make sure no harm comes to either Rose or Nolan even if it means giving her life. Sam is also determined that though she may be travelling with Barrett she will never be willingly romantically involved with him ever again.

When the situation arises that the group are in an old RV park and its clear there are others there, the group splits up. Barrett insists on Rose being with him and sends Sam with Nolan. It is Sam & Nolan that smell cooking meat and discover with horror what is actually being cooked and eaten!

My immediate thoughts upon finishing this book, Wow! Another action packed installment! When will Rose & Sam work out they have both been deceived by Barrett? I really don’t want them to end their friendship like this.

To sum up though the group seem to have escaped the Sins, they may have stumbled into an even worse situation! Then I kind of got to thinking that maybe Nolan, Sam & Rose could cure two problems in one go? Maybe they could barter for a night’s free stay at the RV park. They could give their new dangerous neighbours Barrett?