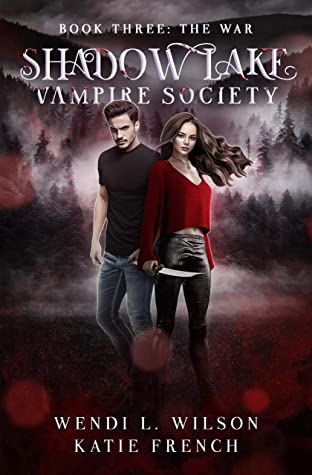 Title: The War
Series: Shadow Lake Vampire Society
Authors: Katie French & Wendi L. Wilson
Genre: Paranormal, Vampire, Witches
Release Date: 13th November 2020
BLURB from Goodreads
With the way people are coming back from the dead, I wouldn’t be shocked to learn we’re in the midst of a zombie apocalypse. But we’re not. It’s just become my new normal in this insane reality I live in. My father died, my best friend was killed, someone wants me dead. Oh, and an unbelievably high percentage of the people I love drink blood to survive. Just another day at Camp Shadow Lake. I can’t bring myself to regret any of it, even when an old vampire feud comes to a head—with me at the center of it all. The leader of the Shadow Lake Vampire Society has had a secret agenda all along, doing whatever it takes to maintain the status quo. Killing people, changing them into vampires, drinking from unwilling humans, and using compulsion to get whatever he wants…well, except me, that is. But the rogue vampires of the Siskiyou Mountains are here to stop them, led by someone I thought I’d lost forever. And I refuse to lose him again. Warren Thornberry and his band of evil minions are going down, for good.
Goodreads Link
PURCHASE LINKS
Amazon US
Amazon UK
REVIEW
I do like the cover of this book better than the one for book two The Count, but my favourite cover of the trilogy is the one for The Vision. The two individuals on the covers I would say are human camp counsellor Piper Williams and vampire camp counsellor Levi Kass.This book literally picks up the breath after The Count ended. Its straight back into the action and aftermath of book two. Piper is still in shock about the fact two people whom she thought were dead and lost forever to her are standing there in front of her. Though they aren’t totally the people she knew before as they are now both vampires.In this book there’s the war looming between The Count, Warren Thornberry and his society that apparently want the vampires to return to their human blood sucking ways and possibly just rule the world! Those trying to prevent them are the vampires who drink bags of human blood or animal blood. Then right in the middle……or are they just waiting to see who wins the war to decide on the whole drinking live human’s blood are The Vampire Council.Piper becomes close again to her best friend Coco, who has been turned into a vampire literally just to get at Piper! All seems to be going really well with Coco being part of the War plan and then she suddenly disappears and it is thought she could be the traitor that was within the midst of Piper’s group. Pipers mother is attacked in this book by Jackson, one of Warrens legion of followers. It seems Warren’s idea is to attack all those that Piper loves, he obviously didn’t get to know Piper as well as he thought as hurting those close to her will not change her mind or attitude towards him. Warren wants Piper to be turned into a vampire and be at his side, like some sort of possession. I mean imagine a vampire/witch hybrid would Piper gain more powers or lose any?A meeting with the Vampire Council just affirms the fact Piper & her group are on their own in this fight. Piper is warned against revealing all of her gifts such as the fact she has visions and her compelling talents. However, she does have to prove that she has witchy abilities when the Vampire Council suggest either wiping her memory of vampires or killing her and Levi as they blame him for Pipers knowledge of vampire’s existence.When the battle begins, everyone has a part to play and it all seems to be going okay until Warren, his witch & vampire sidekick Jackson appear. Piper has to temporarily abandon her station on the top of a roof and go onto the battle field herself.There are a few surprises in this book in that the Chef at the Camp is related to Warrens Witch, Imogen. Then Warrens side kick vampire/right hand man, Jackson has to have some weird extra ability that makes him immune to Piper compelling him. There is also a return of an old friend, as well as a betrayal by someone thought to be on Pipers side of the battle. It really does come down to everything and everyone that Piper holds dear being safe hinges on this one last battle.This book has quite a few of the characters that have been on the first two books, with Pipers psychologist revealing she is not what she seems to be. We meet new characters from Pipers father’s group of vampires, such as Desmond who I will be totally honest here I didn’t totally trust! Of course, there’s the favourite characters of Piper, Coco, True, and Levi. There’s certainly a little romance in the air in this book too despite the fact the characters, human and vampire are facing possible death in the approaching battle.My immediate thoughts upon finishing this book were that though some well loved characters are killed off permanently, some are changed into vampires and some of the hated characters get justice served on them too.To sum up I found this series an enjoyable read, that without giving away too much comes to a fairly happy ending for most of the characters.