REVIEW - THE MAVERICK BY JENNIFER VALENTI 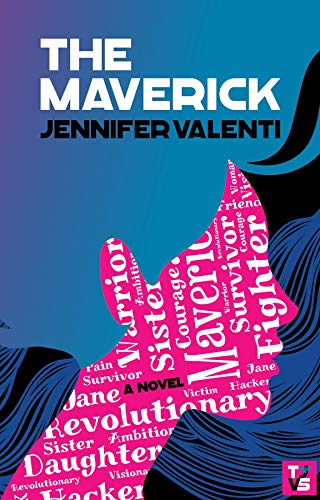 Title: The Maverick
Series: Jane Valiante Series
Author: Jennifer Valenti
Publisher: Broken Arrow Books (an imprint of Hyde Park Books)
IBPA (Independent Book Publishers Association)
Genre: General Adult Fiction, New Adult, Women's Fiction
Release Date: 7th December 2020
BLURB from Goodreads
Some rules are waiting to be broken.Jane Valiante had put so much of her life on hold to care for her father and little brother back in Florida since her mom died, that she’d all but forgotten she once had ambitions of her own. She had nearly resigned to a life of ordinary when the hottest tech company in the world offers to fly her to New York for the job of her dreams.After what shapes up to be a whirlwind of an interview, Jane starts to feel overwhelmed and insecure about her chances. Feeling defeated, she’s surprised to receive an invitation to the holiday party from the CEO and Founder, Peter Wright, planned for that evening. Hoping this could be her opportunity to seal the deal, she happily accepts. That’s when everything in her world turns upside down, as she finds herself back at her hotel room with Peter after the party. What started as a drunken misunderstanding leads to a brutal sexual assault that leaves Jane shattered.Torn by the violence of what happened that night and the shocking choices she inevitably makes, Jane embarks on a precedent-setting journey to right the wrongs she has endured that could ultimately define the fate of a generation.
Goodreads Link
PURCHASE LINKS
Amazon US
Amazon UK
REVIEW
The Cover first drew my eyes to this book, then title made me curious to learn more about the book.
The main character in the book is Jane Valiante who has been living with her father and brother since her mum died, but has reached the decision it is time to spread her wings and get back on track with her career. Jane travels to an interview for a once in a lifetime position. The Interview ends up taking most of the day. With Jane feeling a little disheartened that she doesn’t really know if she has successfully in the Interview, she is surprised to be invited to the companies, holiday party. Seeing it as another opportunity to create a good lasting impression she agrees to go to the party. Jane does become a little carried away with the camaraderie of the other employees drinking glasses of champagne. Jane really feels like part of the group so when it turns out Peter, one of the company bosses needs a place to stay, the offer for him to stay in Jane’s hotel room, just slips out. After all the hotel is being paid by for the company that has two beds. Unfortunately for Jane, Peter seems to see it as a greenlight that she wants to have sex with him along with the offer of the bed! Despite Jane repeatedly saying no, Peter continues his unwanted advances and rapes her. Jane flies home the next day and presumes she will simply not get the job, but then starts to wonder what she should do if she is offered the position. Jane faces that very dilemma when she is offered the job with a great re-location package and the job would certainly look very good on her resume. The work she would be doing would advance detection and cancer care which is very close to Jane’s heart as unfortunately that is what her own mother died of, perhaps that is what pushes her to forgive her new bosses actions.

I don’t want to give away anymore as you need to read it from Jane’s point of view in the book. I found this book handled a very serious subject in its own unique way. Jane certainly approached things in her own way, whether as a reader you think it was right or wrong, the book definitely makes you think and would make an excellent conversation starter to discuss the subject of rape. I totally understood the reasons Jane felt she couldn’t report the rape straight away, as what proof did she have? She had been the one to naively invite him to share her room, when she hardly knew the man. Though when she was offered the job, I am not sure I could have taken up the career opportunity and acted as if the rape hadn’t happened.

Without revealing too much I will say that karma does come around full circle, and Jane does come out of things fairly well. I just imagined a totally different ending, with her gaining applause for all the hard work she and her team put in. As I have said this is most certainly a read that has you still thinking about it even when you have finished reading it. From the I thought she should have said/done this to the what would I do if I were in her situation. It’s very easy to be judgemental and say Well I wouldn’t offered a man the spare bed in my hotel room, but Jane was influenced by her alcohol intake, the feeling of the holiday season and the camaraderie of her potentially future workmates as well as being emotional about the possible part she would be in finding a faster way to detect cancer too. Things really are not always black or white. In this book Jane finds herself in the grey area and allow circumstances to unfold. Jane waits first for an apology, then for Peter to say something about what happened, then the job is so important to her personally and for her career she decides to put the rape behind her.

My immediate thoughts upon finishing the book were that it was not the outcome/ending I had expected. It's an interesting, thought provoking read...makes you think what you would have done in Jane's position.