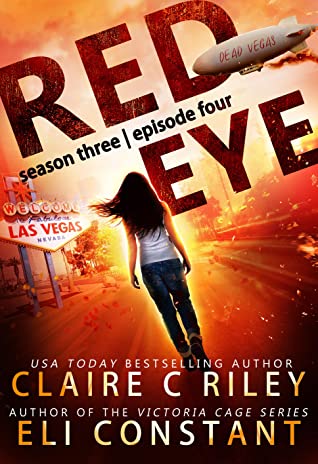 Title: Red Eye Armageddon Season 3 Episode 4
Authors: Claire C Riley & Eli Constant
Genre: Sci-Fi, Post Apocalyptic, Zombies
Release Date: 26th November 2020
BLURB from Goodreads
The group is divided, and sides have been chosen. For one person, it’s too little too late. On their way to Las Vegas to Barrett’s secret hideout, the group takes refuge in RV World, but the place isn’t as deserted as it first seems.
A new location brings more terror as Rose and Sam find themselves at the mercy of Barrett’s crew, the Sins.Now separated from both Sam and Nolan, Rose is a caged animal, terrified but determined to find the people she cares about the most. But how much can one person take?More than ever, Rose would give anything to be sat in a boring office back in England right now.Sam’s secret is never safe; that’s a reality she’s learning to live with. Barrett has protected her up until now, yet surrounded by his so-called family, she wonders how long it will be before he turns on her…Sam longs for the days when her biggest problems were a failed relationship, too many carbs, and a sprained ankle.Life has never been easy, not before the zombies and certainly not after. But even with the dead rising, it is the living that are causing the most problems. It’s the humans that elicit the most fear, that make the apocalypse bloodier, and that kill anyone necessary to survive.Between humans, zombies and the desire for brains,the world’s getting darker by the hour.And the two unlikely friends,need one another more than ever.That doomed red-eye flight seems a lifetime ago…
Goodreads Link
PURCHASE LINKS
Amazon US
Amazon UK
REVIEW
There is a prologue at the beginning of this episode about a male called Liam and another person who I think is female and they are out hunting for food…..and I presume they are the ones that will be providing that food to those in the RV Park that are cannibals!!

Then this episode like the other episodes in the series, picks right up where the last one ended meaning we are thrown right back into the action and drama. Nolan and Sam are left deciding and yes disagreeing about what t do with the human eating residents in the RV park that they have just found. Nolan wants to go for back up, but the sight of the blood and gore and set the monster off inside Sam. The more Sam deals with her inner monster, the more she seems to think she is invincible. The two disagree, finally coming to an agreement that Nolan go for the others to provide backup if Sam needs it. Sam doesn’t think she will need it, she presumes the monster within her will awaken and take care of any danger the cannibals may be. In the end Sam does need help, but I will not go into details as I don’t want to spoil your reading enjoyment.

It’s clear to see in this book that there is still a rift between Rose and Sam. Rose believes that Sam had known she was in the Sins settlement and was choosing Barrett and herself over their sisterhood. They do get chance to talk to each other and clear a few things up in this episode but there are still lingering doubts.
Rose and Sam get some unexpected “girly time” when they find some clothes and food in one of the RV’s. The group decide to stay together. Sadly, Sam, Rose, Nolan & Elias still need Barrett to guide them to his secret hideout away from Sins territory. It soon becomes apparent that Nolan & Rose’s original plan will have to be shelved for now and perhaps have some slight changes in the near future too.

I love Rose in this episode, she gets more and more kick-butt as time goes on. She hates Barrett and all he stands for and she doesn’t care anymore if he knows it. In fact, she lets him clearly know her low opinion of him. I adore the growing relationship between Rose and Nolan. He has clearly fell in love with her and even in his beaten injured state if prepared to fight to protect her.

Having said all that about the characters I love, I am seriously enjoying disliking Barrett! I guess in his own weird warped way he cares about Sam, but he has really upset her withholding information about Rose and Nolan. It doesn’t matter to her that Barrett is now helping them, in Sam’s book he lied to her and she won’t forget it in a hurry.

My immediate thoughts upon finishing this season’s finale episode were, Oh wow!! What a place to end it!!! What a season finale! Seriously can't wait to start reading Season 4 next year!

To sum up, another great episode. I would honestly binge read the rest of the series if it was available right now!! Looking forward to more. So many questions, Can the gang seriously expect to outrun the Sins who seem to be the type that will hold a grudge for eternity? How are things going to go for Sam as it seems that her inner monster is growing stronger and stronger? Would or could she hurt those closest to her?