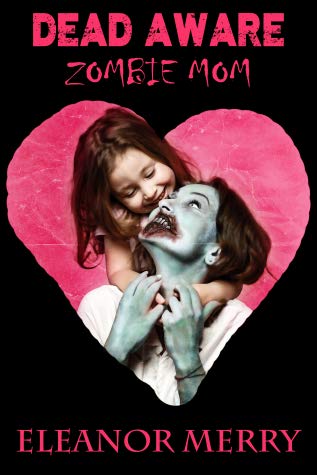 BLURB from Goodreads
Zombie's are pretty happy folk, for the most part. Eat, sleep, hunt and repeat. Sounds perfect, right?When a zombie woman meets a young girl, she must come to terms with the creature she has become and make the ultimate decision. Are people friends, or food?

PURCHASE LINKS
**Free when you sign up for the authors newsletter**

REVIEW
I had really enjoyed reading Vagrant Youth, which is a novella from the Dead Aware Series and I saw that Zombie Mom was exclusively available free to those that signed up for Eleanor Merry’s newsletter and as I wanted to read more of the series I signed up. Zombie Mom is shorter than the Vagrant Youth novella so I would probably call it a novelette.The two main characters of this novelette are a young 9 year old child called Octavia, or Ava for short and a female adult zombie who Ava names Angela as the novelette progresses.Angela doesn’t remember her “before”, as in her before she was a zombie. She remembers waking up in a park bathroom and just laying there as she couldn’t work out how to use the door handle that will allow her outside. She persevered and finally made it outside, though she comes back into the bathroom at night to sleep. It’s when Angela is outside that she hears voices nearby, she looks in the direction of the noise and see’s a small child frantically running away from some unseen danger or person. Angela smells that smell that makes her salivate for something to eat, fresh meat. She stands up and sees the young girl run into her bathroom, the zombie man chasing her cannot work the door handle so gives up and leaves. Angela goes to investigate who it is in her bathroom and what is wrong with the clearly human girl.When Angela hears the child crying, whimpering, then quietly saying hello, it is as if something clicks inside her and she suddenly realises what she was about to do and that its not right. Angela wonders “What am I?” as tears roll down her face. When she looks up, she is looking straight into Ava’s innocent face staring down at her. Ava is curious as to what has happened to Angela and like only children can, strikes up a conversation with her. It soon becomes apparent that Angela is not the usual type of out of control zombie that attacks humans to eat etc. Angela is on of the dead that are still somewhat aware of the world around them.Later in the novelette Angela and Ava meet up with some of the other characters from the Vagrant Youth novella which ties the novelette into the series well. I could have read on and on about these characters both the aware zombies, and the humans that are trying to survive attacks by the mindless zombies and other humans that are out for themselves looting places and shooting people who get in their way.To sum up I think this short story, novelette that is part of the Dead Aware Series, and is set in the same virus ravaged world is a great taster of what is to come from the rest of the series. I really enjoyed reading this one especially the relationship that develops between Ava & Angela. Liked the way the characters from Vagrant Youth and Zombie Mom have met up. I am certainly looking forward to reading more about these characters in the rest of the series as well as meeting more aware zombies too.