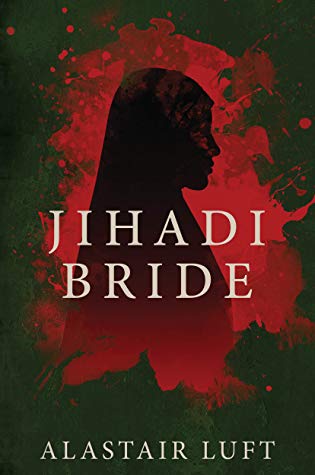 BLURB from Goodreads
Erik Petersson works with the High-Risk Traveler Task Force, an organization that prevents radicalized individuals from joining extremist groups. Disciplined and dedicated, Erik’s carefully controlled world is upended when his daughter, Arielle, leaves university to join the Islamic Caliphate, a terrorist regime in Syria. Erik rallies a desperate effort to stop her, but when he fails, he resolves to bring Arielle back, whatever the cost.

Driven by a secret she can’t outrun, Arielle’s dream of a more purposeful life is confronted with the brutality of life in the Caliphate. When she attracts the attention of Abu Noor al Kanadi, a terrorist leader bent on punishing America for its actions in the Middle East, Arielle must choose whether to sacrifice her dreams to survive or risk a frantic bid to escape. Torn between rival agendas, father and daughter must choose between family or country, love or fear.

REVIEW
I had looked at this book a couple of times and I was honestly not sure whether I really wanted to read it or not. You hear so much in the news about young people being radicalised and going out to places at war. In the end my curiosity got the better of me and I went into reading the book with an open mind and the intention I always have of giving my honest opinion. The genres listed for this book are historical fiction, mystery and thriller. I am not wholly sure I agree with the “historical” label as I feel the subject matter of the book is more current than historical really. I would agree with the labels of mystery, and thriller and would add suspense and maybe political/religion to the list.

One of the books main characters is Erik who works as part of the High- Risk Traveller Task Force that attempt to prevent those that are radicalised from joining extremist groups. Erik takes his work seriously and certainly puts a lot of hours into his job to the point of being a workaholic. Sadly, it means when something awful happens to his daughter, he doesn’t know about it and she doesn’t reach out to him. In fact, she reaches out to an already radicalised friend she has at college. Erik and Arielle regularly remotely play Warcraft together. So, it comes as a total shock to Erik when he receives a phone call from his daughter Arielle before their pending Warcraft game session cancelling it and saying she doesn’t have much time, that she is in Frankfurt, that she loves him, doesn’t disown him, even though she is supposed to do that and live their previous life behind. Arielle tells her dad she loves him and will pray for him and goodbye. Arielle reveals she is travelling with her friends to Turkey, to meet someone who will then take them into Syria.
Erik tries his best to talk his daughter out of her plans, saying there is a civil war in Syria, its dangerous, he asks her not to do this. But her reply has him thinking back to the headstrong, hard headed child she was at just age three. It’s when she says “Now that there’s Caliphate, hijrah is an obligation”. When asks what all that has to do with her, Arielle reveals she converted six months ago. Erik tries his best to keep his daughter talking to gain clues as to who she is with, where she is and how she is getting to Turkey and then onto Syria. These clues are the base stones he has to rely on when he tries to find his daughter. He tries going through the official channels but when those wheels grind increasingly slower and he is shut out, told he is too involved emotionally, he takes the only course of action left to him, to go after his daughter himself. In Eriks mind and world there is not “if” he will find his daughter and get her back only a “when” he will.

Arielle is the other main character of the book and comes across as a fairly strong, independent character who lost her mother when she committed suicide when she was much younger. Arielle is joining in college life and whilst out socialising something awful happens to her. Arielle feels ashamed and reverts into herself, becoming quiet and timid until she meets Naomi, the friend that introduces her to a bible class. After attending the class and hanging out with Naomi and her boyfriend Hamza she soon becomes caught up in the religion and going to Syria. Arielle and Naomi are under the impression that they will be working in a hospital, caring for the ill or injured. Naomi believes Hamza will be there to greet them when they arrive in Syria. It soon becomes apparent that the girls have not really been given the true facts about where they will be staying, who they will be with or what they will be doing either!
Umm Fatima who met the girls on their arrival, escorts Arielle and the other girls to a woman named Deeba. In the small room there is a row of seats and Deeba sits at a desk with paperwork in front of her and a man standing guard near her called Tariq. The room is hot and wearing her new attire Arielle feels claustrophobic and ill. Deeba is in charge of giving the girls new, more suitable names and their job/purpose. Arielle is renamed Hafsa and is told she is to marry Mus’ab Saleh, when Arielle says she is there to work in a hospital she is told there are enough working at the hospitals that she has to marry and her first duty is to “make cubs for the Caliphate”. Arielle feels numb and just returns to her seat, thinking of what she had been told she would be doing and why it has all suddenly changed, but she is too scared to speak up. When her friend Naomi is given the name Abdia and told who she is to marry she says no, she has a boyfriend and wants to know where Hamza is. When Naomi refuses to return to her seat, Tariq steps forward and strikes her continuously until she is in a heap on the floor. Arielle tries to comfort her friend, but soon leaves the room and doesn’t know what happens to her afterwards.

The book is told in a kind of diary format, in that at the beginning of the chapter the place/setting and time of day are listed. Then we find out which character we are following in that specific chapter. I would say there are three, maybe four angles to the story. There is Erik’s which
tells his part of story from his point of view and we follow first the official channels to try and trace his daughter with the intention of her being picked up by Police and being returned to him. Then when those channels do not seem to be interested enough in his daughter, Erik is forced to take matters into his own hands approaching the problem in a more unofficial way.
There is Arielle/Hafsa’s side which tell of what is happening to her in her day to day life and what she sees. Hafsa/Arielle is soon married off to Mus’ab Saleh. Luckily for Hafsa Mus’ab is kind and quite gentle with her, not insisting on consummating their marriage immediately.
We also have the chapters on Abu Noor al Kanadi who is a known extremist and his second in command Mamdouh al Qassam who are in fact being monitored by the High-Risk Traveller Task Force.
It seems that Abu Noor al Kanadi doesn’t have the stomach for the public be-headings and other such atrocities, though his second in command Mamdouh al Qassam more than makes up for it!
As Erik did work at the Task Force there are the interaction between him and his colleagues. In fact, there’s the beginning of a possible romance between Erik and Stephanie. Another colleague called Jordan gives Erik some intelligence prototypes to use as well.

Characters I instantly liked were, Erik, Stephanie, Jordan and Ziad. I grew to like Arielle/Hafsa who soon realises that she is being used as a pawn in a much bigger game and war than she ever thought she was entering into. I felt a little sorry for Arielle/Hafsa and Naomi/Abdia how naïve they were. They thought they were going to work in a hospital, tending the ill. Though if I am honest, I don’t think either girl would have easily slipped into caring for the type of injuries they would have had to deal with. Having said that, when Arielle/Hafsa is forced to face a highly contagious disease she does try to help those with the illness. I also liked the character of Mus’ab as when an opportunity arose where he could desert his post and disappear back to his own country, he doesn’t take it. Mus’ab returns to Raqqa for his newlywed wife Hafsa/Arielle and they attempt to escape over to Lebanon but are caught. I won’t reveal what comes after their capture as you need to read the whole book yourselves.
I did enjoy reading this book, even though I was unsure to begin with about reading it. It was interesting, yet disturbing at the same time. The punishments that Mamdouh delivers are horrendous and he seems to be totally unaffected by them. However, Abu Noor al Kanadi is quite happy to let others do the dirty work of punishing, torturing and killing on his behalf. There are some really poignant moments towards the end when both Erik and Arielle are suspected of having Ebola. There’s also quite a bit of fighting action too from the different sides of the war, the mercenaries Mark and Chris who also seem to enjoy the killing a little too much.

My immediate reaction upon finishing this book were that it had been engrossing, a very realistic, and believable story. Also, that it had some great characters.

So, to sum up, I am glad I went ahead and read the book, it did show different sides of an horrendous war and how people can get caught up in it fairly easily.