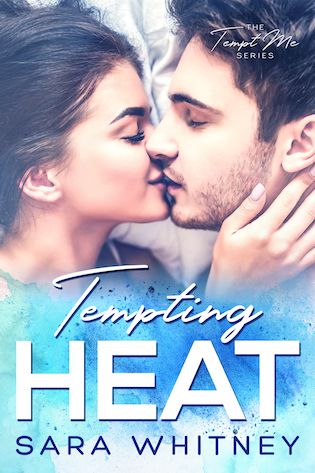 BLURB from Goodreads
An unforgiving blizzardTom Castle ended up in the wrong apartment on the wrong day. Now a ferocious snowstorm has him trapped with his onetime crush and longtime regret, which is pretty much in line with his lifelong bad luck.An unwelcome houseguestFinn Carey has no choice. Although it’s tempting to let Tom take his chances on the streets of Chicago, she doesn’t want anyone to die in a snowbank— not even the man who hurt her so badly years ago.An unexpected second chance at loveAt first, Tom and Finn do their best to ignore each other in the close quarters. Then the power goes out, and things between them heat up as the secrets start to flow. Which will thaw first: the storm raging outside or the ice protecting their hearts?

REVIEW
This book came to my attention via Giselle at Xpresso Book Tours, I was already posting a Book Blitz and when I saw the Blurb and then read the Excerpt, I wanted to read the whole novella! I had also recently read an anthology of “Halloween themed” novellas called Trick Or Treat Me and Sara Whitney had a novella that I loved in there too.

I love the cover with the kissing couple depicting the characters in the book. I don't read lots of the lighter contemporary genres, I tend to read a lot more of the paranormal, sci-fi genres. So, this is one was a nice change, a feel good, romance type of book.

The main character is Fiona Carey, though friends and family call her Finn. Finn shares a flat with best friend Josie who she met at college. Josie has gone away as part of her job and just left a note for Finn, who ends up being rather shocked when a half-asleep guy comes wandering out of Josie's bedroom. Even more distressful for Finn is she knows the guy from school and they have "history" in that she used to date his best friend. Finn gets over the initial surprise and thinks back to what she refers to as the “incident” where she truly believes Tom betrayed her trust which ended up in a very upsetting and stressful last couple of weeks of high school.
Tom tries to avoid further awkwardness by attempting to leave straightaway but the weather is awful and snow is mounting up on both the side-walks and the roads. He attempts to struggle on until he hears Finn shouting out of one of the windows for him to come back, the snow is too bad. Initially things are almost as frosty inside the flat as it is outside it but they end up kind o calling a truce. Things go from slightly thawed, to steamy hot over the course of the weekend. Then there’s another misunderstanding where things go slightly awry . . .but you’ll have to read the novella to find out if there’s a happy ending.

There’s a really funny point in the book where Finn is talking to her mother who seems to think Finn cannot take proper care for herself. Her mother actually asks what is someone breaks in. Finn finds the suggestion far- fetched and she puts down the phone she has a little sort of chuckle to herself. Then later when it turns out that she isn’t even in the flat alone, in fact, there was someone in the flat that she didn’t know about when she was talking on the phone to her mother, Finn finds it rather amusing.
I think it’s really cute when Tom refers to Finn as Huckleberry, her nickname from when they were at school together.

I adored the characters of Tom and Finn. Tom’s character being very chivalrous and escorting a drunken Josie home yet not taking advantage of either situation or Josie. I thought the way they still had feelings about the “incident” was so realistic too. I mean I think we all have the guy we really liked, and crushed on but never actually dated. I was so attached to the characters of Tom and Finn that I was angry at the character of Josie and wanted to shout at her. I’m still not sure I really like Josie as a character though I guess I will have the chance to learn more about her in the next novella, as it seems she is a more central character in Tempting Taste. I also thought that Finn’s brother Jake was an interesting character, maybe he will have his own romance in a later novella.

My immediate thoughts upon finishing this book were that it was a brilliant read and I had adored it from beginning to end.

To sum up the novella flows really well, and it felt like a really quick read. It certainly left me wanting more! I would have gone straight on to reading the next novella in the Tempt Me Series had it been available to buy! I certainly agree with some of the comments in the blurb, this book is a sassy, sexy, I’d say steamy contemporary novella.