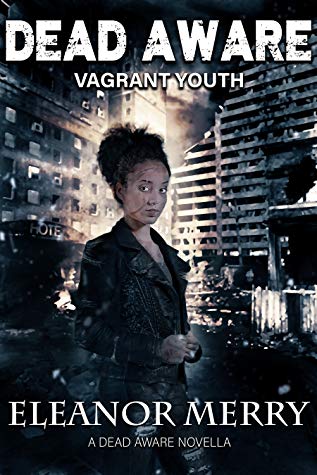 BLURB from Goodreads
How will a group of homeless youth fare against a viral apocalypse?Fever Induced Rapid Encephalitis AKA. F.I.R.E.This is the name humanity gave for the virus that covered the globe within days. A highly contagious disease that first seemed to be a run of the mill flu but soon turned into something much more sinister.Abby has been living on the streets of Vancouver for years, acting as a leader to a small group of homeless youth. When the FIRE virus hits the city, the kids must use all of their street smarts to stay alive. Unable to fit into society prior to the virus, will they be able to find their place in a new undead world?

REVIEW
Vagrant Youth was the first instalment of the Dead Aware series that I came across. The novella was just 99p which is a a good price when you are trying an author that you haven’t read before. Also, I haven’t really read many books in the Zombie genre either.

The main characters in this book are a bunch of street kids. The eldest ones are Abby and Ike, they end up acting like the parents of the rest of the group, Benny aged 8 years old, Joshua & Tara aged 14 years old and the youngest being Olive who doesn’t really speak at all. Each child/member of their group have their own tragic story of how they ended up on the streets. What they all have in common are that they are unwanted, and unloved. Rather than let their stories turn them down darker paths, together they have all flourished. Abby and Ike brought them in and gave them love and a purpose. They felt responsible for the well-being of each of the youth and on the whole, they manage to find food and live in abandoned buildings.

It’s whilst out scavenging that Abby finds a newspaper and learns about the FIRE virus that is sweeping the world. FIRE stands for Fever Induced Rapid Encephalitis. The virus started in Delhi India but has soon spread around the whole globe. The newspaper states that at this time, the World Health Organization is working around the clock to determine more of this virus’ origins and its possible effects; however, in the interim, they have advised all citizens to remain indoors whenever possible and to stay away from anyone who is exhibiting signs of illness. We will provide updates when we have more information on how the virus is spread. Please be aware of the following symptoms:
● Fever ● Lethargy ● Vomiting ● Diarrhea ​ ​ ● Photophobia ● Confusion ● Seizures

It's not long until one of the street kids becomes infected, then the virus spreads despite Abby’s best efforts at quarantining anyone showing symptoms. It seems that some people are immune, so it ends up with only Abby and Tara escaping the illness and being nurses to the others.
Ike, Joshua, Benny and Olive all die but to the initial shock and horror of Abby and Tara, Ike “comes back”, though he is initially violent when he looks at Abby and spots a necklace he gave her he suddenly seems to be well aware of who Abby is and what sort of relationship they had. When Joshua dies, Tara hopes that he will return and be the same type of zombie as Ike, however that is not the case. Joshua is violent and it is Ike that has to defend the girls and kill Joshua. With just Ike, Abby and Tara left they decide they have to move and try somewhere where they can live together that is safer than their current home which is becoming more dangerous every day. They need to find somewhere they can obtain food and supplies.

One of my favourite characters was Ike who even though is a zombie himself and Joshua was attacking a member of his family, he still finds it difficult to come to terms with the fact he killed Joshua who was also a member of his family. I also adored Benny, the way he looked up to his hero Ike. It is apparent that Benny kind of keeps Ike fighting his illness as he takes on caring for Benny when the boy is quarantined in the same room as him.

I think the name of the series, Dead Aware is genius as there are more than one type of zombie on the rampage. There are the mindless, fight and kill everything in sight zombies and there are those who died, came back as zombies yet seem to be aware. So Dead Aware is perfect for these zombies such as Ike, Guy and Cassie.


To sum up, I really enjoyed the introduction/taster this novella gave of the Dead Aware world a lot and immediately purchased the first full length book in the series, A Zombie Journey. I honestly couldn’t wait to start reading more. I already love the characters of Abby, Ike & Tara and am definitely wanting to learn more about Guy, Cassie and the rest of their group and how they came to be together. I am also anticipating some more great adventures and dangerous situations that these characters are going to find themselves in as well as maybe meeting even more dead aware zombies too.