REVIEW - HOW THE IN~LAWS WRECKED CHRISTMAS BY FIONA GIBSON 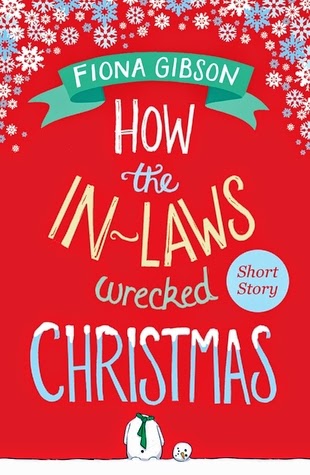 BLURB from Goodreads
A funny, festive short story from bestseller Fiona Gibson. Just the thing to curl up with on a cold winter night.Christmas in the country. What could be better? All you need is one country house, one gorgeous boyfriend and a liberal dusting of snow. Right?That’s what Anna thinks and she can’t wait for the festivities to start. But then she meets her gorgeous boyfriend’s awful parents. And their drunk friends. And she starts to hear all about a certain ex-wife. Suddenly this doesn’t look like a very merry Christmas after all…

INITIAL THOUGHTS
I had decided this year I was going to attempt to read more Christmas themed titles. So I have been looking out for novellas and short stories too.

MY REVIEW
I downloaded this novella from Amazon UK and it was Free!
The cover is in the festive appropriates colour's of red and green. The cover also features a part built snowman too. The snowman is specifically relevant to a scene from the novella.
Would I pick this book up from a book store shelf on the strength of just the cover? Yes the bright colours would attract your attention well! Of course there are all the pretty snowflakes to add more to the festive feel of the cover.
The main characters are Anna and her boyfriend of 5 months Ben. Anna lives with her good friends Kate, Jamie and Tom in a house share. They decided that the only way they could get on the property ladder was to pool their money, which is working well for them all. Anna has introduced her boyfriend Ben to her housemates. Ben isn't all that keen on Anna's friend's, specifically Jamie, and her living arrangements so he never stays over. Ben does invite Anna to stay at his place fairly regularly though, so when he asks Anna to spend Christmas with him, his 6 year old daughter Daisy, and his parents, she agrees. Though she has loved her Christmas celebrations with her friends in her own home, she decides perhaps its time for a change of plans. Anna agrees but becomes a little edgy on the drive to their home. The scenery they pass through is a kind of quaint village, with thatched roofs. Anna initially relaxes, and Ben insists that she nothing to worry about. Anna settles a little until they turn up the grand driveway to to the large house that Ben's parents live in.Upon arrival and being introduced to Ben's parents. At first Anna thinks she is imagining that Charles and Clara are scrutinizing her in a derogatory way, she tries to give them the benefit of the doubt.
When Daisy appears Anna feels a little more welcome. When Daisy asks to go play out in the snow she jumps at the chance. Clara and Charles reluctantly allow Daisy a little time out in the snow. However part way though the construction of the snowman,  Clara and Charles appear at the door saying its time for indoor board games time. They shout for Ben to come to them and there's an exchange of words and then Ben announces that it's time to go indoors. Anna continues to feel out of place and this feeling increases as Daisy is sent to bed and "a little gathering" takes place where the wine and drink flows and Anna overhears people talking about how perfect Louisa, Daisy's mother was. Anna also overhears a rather revealing conversation between Ben and Clara. Anna felt uncomfortable enough seeing a large photograph of Ben and Louisa's wedding day but after hearing the secretive conversation, she has some tough decisions to make.  Ben's family continue with "their" traditions regardless of their guest Anna and her obvious discomfort. In the end Anna has had enough and sneaks off upstairs and reads to Daisy and then retires to her room. An inebriated Ben ends up causing an argument when he retires to bed. Ben certainly shows a side of himself that had previously been kept well hidden. I won't go on into more details, but lets just say, Daisy gets her Christmas wish of a snowman, Anna makes a tough decision, and reveals some shocking news too.
So did I enjoy the novella? I did, it was a quick seasonal and totally believable tale.
Would I recommend the novella? Yes, it's short enough to be read in one sitting.
Would I want to read more about the characters in this novella? Yes, I'd love to know more of what happens to Anna after this novella. I'd also like to perhaps learn more about Daisy and her mother Louisa too. I love to read Bens reaction to what happens near the very end of the novella too, as well as wanting to know more about a character that entered the novella near the very end.
Would I want to read other titles by this Author? Yes, I liked her writing style, her outlook on relationships. I enjoyed the twists and turns and irony within her writing too.