ABOUT THE SERIES
The Ivy Granger series is an urban fantasy series written by E.J. Stevens. The series is told in the first-person point-of-view of Ivy Granger, a psychic detective with ties to the paranormal underworld of Harborsmouth—ties that ensnare Ivy and her friend Jinx in the Machiavellian schemes of the city's teeming population of bloodsucking vampires and psychotic faeries. 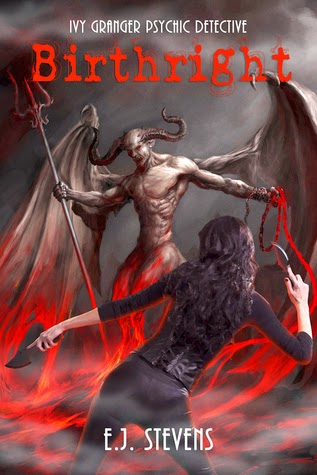 BLURB supplied by the author
Being a faerie princess isn't all it's cracked up to be...Ivy must go to Faerie, but the gateway to the Wisp Court is through Tech Duinn, the house of Donn—Celtic god of the dead. Just her luck.Unable to share her secret with Jinx, and with Jenna called away on Hunters' Guild business, Ivy must rely on Ceff and Torn to lead her to Death's door, literally, and back again. As if that wasn't dangerous enough, there's no saying what horrors lay in store within the Faerie realm. Too bad the Wisp Court is the one lead Ivy has in the search for her father—and possible salvation.Maybe hiding away and dodging sidhe assassins isn't so bad after all...

Wisps buzzed through the air, their musical humming rising in pitch as they darted in for a closer look.  I sat on the mossy embankment and smiled, watching the playful wisps.
With my father’s key helping to guide us, we’d left the deadly bog and its poisonous gas behind.  I breathed deeply, and let out a happy sigh.
“I don’t know what you’re so happy about,” Torn said, shaking water from his hair.  “We’re covered in mud and smell like troll farts.”
It was true.  The sulfurous swamp gasses did smell an awful lot like something that would come out of Marvin after he ate an entire cauldron of Kaye’s chili, but I didn’t care.  We were alive.  And so far, my wisp brethren weren’t trying to kill me.
I’m not sure what it said about my life that the lack of fratricide upon my homecoming made me feel all warm and fuzzy inside.  Probably best not to think too much about it, and just enjoy the moment.
I shrugged, and kept on smiling.
“Well don’t get too comfortable, Fish Breath is on his way over with his pensive face,” Torn said.
He stalked off to sit on a rock a few paces away, but I shrugged again and closed my eyes, turning my face to the moon and stars above us.  I wasn’t going to let Torn ruin this moment.
“Are you feeling well?” Ceff asked, settling on the mossy ground beside me.
I cracked an eye open, grinning from ear to ear.
“I feel great, never better,” I said.  In fact, I felt a bit dizzy and my lips tingled, like I’d had too much to drink.  Only I would get buzzed off the buzzing of wisps.  “Just buzzed off the buzzing.”
I hiccupped, and giggled, the laugh coming out in an undignified snort that startled the nearest wisps.
“Are you sure that you are not angry, or afraid?” he asked.
I forced myself to look up into Ceff’s face.  His head was titled to the side, as if listening for something, but his attention was focused solely on me.
“I’m fiiine, really,” I said, waving a hand.  My eyes widened, and I let out another giggle.  “I’m glowing.”
“Which is probably what has his highness’ panties in a bunch,” Torn said, coming over to tower above me, arms crossed.  “There is something weird about seeing you smile like that, especially when you’re glowing.”
“What?” I asked.  “I smile.”
“Almost never, and when you do, it’s usually because you’re killing something,” he said.  “Not that I’m judging.  I’m just saying Fish Breath has a point.  You’re different.”
“She is high on power,” Ceff said, eyes going tight.  “I should have recognized the signs sooner, but I was focused on our flight through the bog, and then with releasing the water magic that held our masks together.”
“You think it’s the wisps?” Torn asked.
“That would be my guess,” Ceff said, rubbing his jaw.
“This didn’t happen after our run in with those wisps in Ocean Overlook cemetery, did it?” Torn asked.
“No,” Ceff said.  “Not that we noticed.  But Ivy was badly wounded that night, and took days to recover consciousness.  And…I…I was not at my most attentive.”
That was the night that I’d killed his ex-wife.  Melusine may have been the raging psychotic bitch who’d murdered his children, and tried to kill us as well, but that didn’t mean her death had been easy on Ceff.
The memory of Ceff’s grief flooded me, pushing the giddiness away.
“I think…I think I’m back to normal now,” I said.  I yawned, covering my mouth with the back of my gloved hand.  Ignoring the encroaching bone deep fatigue, I tried to pull myself to my feet, but sank back down when a wave of dizziness nearly toppled me over.  “I just need a minute.”
“You are exhausted,” Ceff said, brow wrinkling.  “Rest here.  I will keep first watch.”
“But my father’s court…” I said, but my words were cut short by another yawn.
“Will still be there tomorrow,” Torn said.
“Plus, I can scout ahead while you sleep,” Ceff said.  “We will make better progress if we are rested and certain of the path ahead.”
“Fine,” I said, eyes fluttering closed.  “But just a quick nap.”
The last thing I saw, before losing myself to the darkness of sleep, was a cloud of wisps hovering over me, lending me their warmth…and their power. 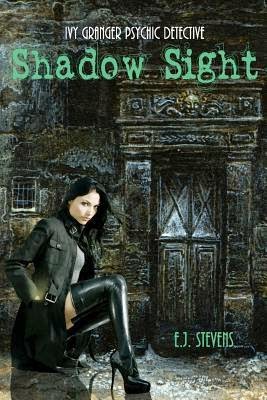 BLURB from Goodreads
Welcome to Harborsmouth, where monsters walk the streets unseen by humans…except those with second sight, like Ivy Granger.Some things are best left unseen...Ivy Granger's second sight is finally giving her life purpose. Ivy and her best friend Jinx may not be raking in the dough, but their psychic detective agency pays the bills—most of the time. Their only worry is the boredom of a slow day and the occasional crazy client—until a demon walks through their door.Demons are never a good sign...A demon attorney representing the water fae? Stranger things have happened. And things are about to get very, very strange as a bloodthirsty nightmare hunts the city of Harborsmouth.There's blood in the water...Kelpies have a reputation for eating humans. Unfortunately, Kelpies are the clients. When an Unseelie faerie this evil stalks the waterways of your city, you have to make hard choices.The lesser of two evils.. 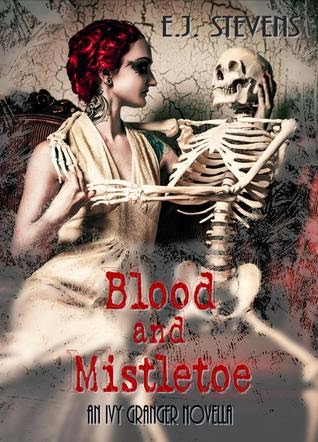 BLURB from Goodreads
Holidays are worse than a full moon for making people crazy. In Harborsmouth, where many of the residents are bloodsucking vampires or monstrous fae, the combination may prove deadly.Ivy Granger, psychic private investigator, returns to the streets of Harborsmouth in this addition to the bestselling urban fantasy series. Holidays are Hell, a point driven home when a certain demon attorney returns with information regarding a series of bloody murders. Five Harborsmouth residents have been killed and every victim has one thing in common—they are fae. Whoever is killing faeries must be stopped, but they only leave one clue behind—a piece of mistletoe floating in a pool of the victim's blood.The holidays just got interesting. Too bad this case may drive Ivy mad before the New Year. Heck, she'll be lucky to survive Christmas. 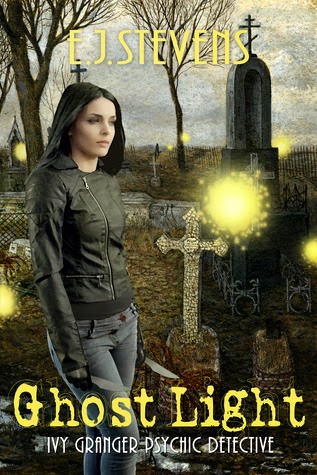 BLURB from Goodreads
Ivy Granger, psychic detective, thought she'd seen it all...until now.With a vengeful lamia that only she can see on the city streets, reports of specters walking Harborsmouth cemeteries, and an angry mob of faerie clients at her office door, it's bound to be a long night. Add in an offense against the faerie courts and a few foolish bargains and one thing is clear—Ivy Granger is in some seriously deep trouble.Ivy Granger is back, gathering clues in the darkest shadows of downtown Harborsmouth. With the lives of multiple clients on the line, she's in a race against time. Ivy finally has a lead to the whereabouts of the one person who can help her control her wisp abilities, but will she put the needs of her clients above her own?If Ivy doesn't find a solution soon, she could wind up a ghost herself. 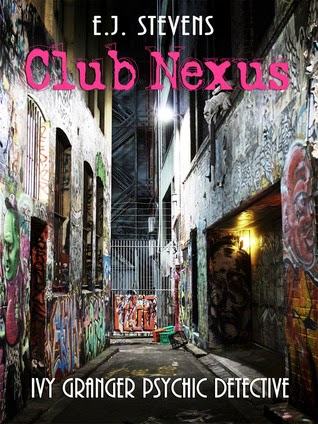 BLURB from Goodreads
A demon, an Unseelie faerie, and a vampire walk into a bar...This Ivy Granger ebook special contains short stories set in Club Nexus, the hidden haunt of Harborsmouth's paranormal underworld.ICEDA bargain gone wrong leads a highborn Unseelie faerie to life as an enslaved bartender with a taste for revenge.DUSTEDBeing a highly skilled predator doesn't necessarily put you at the top of the food chain at Club Nexus. A southern vampire with a hankering for blood and wanton violence may have bit off more than he can chew.DEMONIZEDThe demon attorney we love to hate has his eye on a certain rockabilly human. Too bad she's brought a crossbow loaded with holy water dipped bolts for this night on the town.JINXEDJust when Jinx needs a carefree girl's night out with Ivy, a smoking hot demon tries to buy her a drink. She really is the unluckiest human on the planet. 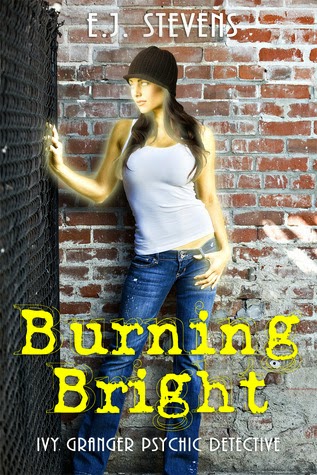 BLURB from Goodreads
Burning down the house...Things are not going well at the offices of Private Eye. Jinx is having demon problems, the city is overrun with pyromaniacal imps, and Ivy's wisp powers are burning out of control, attracting the attention of both the Seelie and Unseelie courts.Along came a faerie queen... It's the worst possible time for the Green Lady to call in a favor, but Ivy's bound by her deal with the glaistig. Too bad there's no wiggle room in faerie bargains.Ivy must rid the city of imps, keep Jinx from murdering her one solid link to Hell, and fulfill her bargain with the Green Lady—with sidhe assassins hot on her tail.Just another day's work for Ivy Granger, psychic detective. 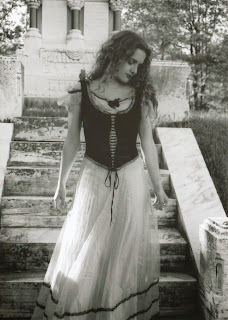 E.J. Stevens is the author of the Spirit Guide young adult paranormal romance series, the Hunters’ Guild urban fantasy series, and the Ivy Granger urban fantasy series. She is known for filling pages with quirky characters, bloodsucking vampires, psychotic faeries, and snarky, kick-butt heroines.
When E.J. isn't at her writing desk, she enjoys dancing along seaside cliffs, singing in graveyards, and sleeping in faerie circles. E.J. currently resides in a magical forest on the coast of Maine where she finds daily inspiration for her writing.
Author Links
Twitter