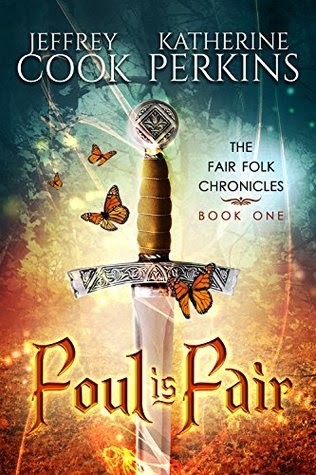 BLURB supplied by the authors

Lots of girls play Fairy Princess when they're little. Megan O'Reilly had no idea the real thing was like playing chess, guitar, and hockey all at once.
Megan had known for a long time that she wasn't an entirely typical girl. But living with ADHD—and her mother's obsessions—was a very different thing from finding out she wasn't entirely human.


Somewhere out there, in a completely different world, her father needs help. There's a conflict, revolving around Faerie seasonal rituals, that could have consequences for humanity—and if Megan's getting the terminology straight, it sounds like her family aren't even supposed to be the good guys. As she's further and further swept up in trying to save her father, Megan may be getting too good at not being human.

What is your name, where were you born and where do you live now?
My name is Jeffrey Cook. I was born in Boulder, CO, proceeded to move all over the U.S. and a bit of Canada, and eventually settled down in Maple Valley, WA—about 35 miles from Seattle.

Did you always want to be a writer? If not what did you want to be?
My mother insists I've wanted to be a writer since I was little. I discovered books at a very early age, and read all sorts of things, which contributed. I also spent a lot of time traveling, mostly with my father. We'd pass the time on these trips, when I was little, by having him set a story scenario for me, and I'd interact with the story through that character, and then he'd adapt the story depending on what I did. Between my mother encouraging me to read as much as I wanted, and the collaborative stories, I developed a love of story and narration—and getting to really interact with good stories—very early. Admittedly, I also wanted to be a paleontologist for many years.

Who is your publisher? or do you self publish?
I'm mostly self-published, but have one book out with Fire & Ice YA Press (Mina Cortez: From Bouquets to Bullets), and I'm one of the head organizers of Writerpunk Press, with whom I publish charity science-fiction anthologies. (Our first one just came out in March, Sound & Fury: Shakespeare Goes Punk, presenting 5 of Shakespeare's plays, adapted into the 'punk' sub-genres, including my Steampunk Winter's Tale.)

How long does it usually take you to write a book, from the original idea to finishing writing it?
Writing books usually takes about two months for the actual first draft. Then about the same for rewrites, edits, etc., depending on how many other projects I'm working on at the time. While writing any one book, I'm also usually working on bits of others, short stories, the charity novellas, etc., which can change the amount of time it takes to get a novel done.

What can we expect from you in the future?  ie More books of the same genre? Books of a different genre?
The one certainty is that I plan to do a lot more books co-written by Katherine Perkins. We have a good working relationship, and the books she works on come out better for her contribution.
Genre-wise, we're going to complete the Fair Folk Chronicles (4 books) and have one other YA Urban Fantasy in the works (Unchosen). I'm also working with author AJ Downey on a three-book series of urban fantasy.
I plan to return to the world of my first trilogy, the Dawn of Steam universe, for books 4-6, but not for a couple years.
Finally, Writerpunk Press has 3 more anthologies in the works. The next will be another volume of Shakespeare adaptions. Next year, we plan on doing one for Poe, and one of general Classic Literature.

Do you have a favourite character from your books? and why are they your favourite?
Sam Bowe from my Dawn of Steam series is my favorite character to write. Growing up with a mix of Westerns, Science Fiction, and Fantasy—it was fun to write a Steampunk-world throwback who kind of mixes all three genres.

Do you gift books to readers to do reviews?
I rarely hand out physical copies, with a few specific exceptions for locals that I know, and who have done reviews for me before, but I will gladly gift e-books ARC copies to reviewers. That goes for any of my books.

Do you basic plot/plan for your book, before you actually begin writing it out? Or do you let the writing flow and see where it takes the story?
I almost always begin with an outline—usually with an end point, and a sentence or two for numerous chapters and plot points. Then I let the story go, and scrap the outline, then do a new one, if the direction changes.

What do you do to unwind and relax? Do you have a hobby?
I love reading but haven't had a lot of time to do it this year. I'm an avid football fan and enjoy watching a fair number of sports. When I get the chance, I also enjoy table­top role­playing games with friends, and have done some work in the role­playing game book industry. I also really love movies, but far prefer to go to the movies with people, as discussing it afterwards is very much part of the experience for me.

Which format of book do you prefer: ebook, hardback, or paperback?
I prefer paperbacks. If I'm on any kind of electronic device, and books are involved, I usually feel like I should be working.

What is your favourite book and Why? Have you read it more than once?
Mary Shelley's Frankenstein is my favorite novel. There's so much depth, and so many questions and implications, in the midst of a rich story.

Do you think books transfer to movies well? Which is you favourite/worst book to movie transfer?
As far as direct transfers, no. The mediums don't always work together well, and there usually needs to be adaptions made. That said, I love reading, and I love movies. As long as it's handled carefully, it's possible for both to be very good.
Despite the drastic differences in Hannibal Lecter in each, Silence of the Lambs is
probably one of my favorite cases where the book and movie are both equally gripping ­ but very different

Did you read a lot at school and write lots of stories, or is being a writer something newer in your life?
One of my mother's favorite stories regarding my reading:
In kindergarten, we had a big box of age­-appropriate readers. We were allowed to read at our own pace and had time set aside each day for reading. The goal was for each kid to finish a section,­ with the big box broken into about 10 sections of 7 to 10 books each. Second day, I went to the teacher, and told her, "I'm done."
She said I should move to the next book. I told her, "No, I'm done."
"Move to the next section then." "No, I'm done." I'd finished the box. My parents were called in. They thought it was hilarious, and started sending me to school with my well worn copies of The Chronicles of Narnia and the Bunnicula series instead.

Are there any New Authors you are interested in for us to watch out for? and Why should we watch out for them?
I've discovered Sechin Tower's Mad Science Academy books, and love them. I'm looking very much forward to Shiv Ramdas's sequel to Domechild. I'm venturing further into Lee French's Maze Beset series and enjoying those books, with plans to read some of her fantasy as well.

How does the writing process work with two authors?
First we make an outline of the story together.
Then Kate will go through and write a various detailed character moments.
Then Jeff will go through and fill in the plot and action between those moments to make a full chapter.
Then Kate will thoroughly edit that chapter, with rewrites as necessary, then put snippets in further chapters.
At some point, the outline will stop working, and we will alter it accordingly and continue.

Do you ever disagree on the direction of a character or the plot?
Yes, dating back to when Kate first started as Jeff's editor on Dawn of Steam, his trilogy of emergent Steampunk epistolary novels. Granted, in one of those cases, it was a plot point written by Jeff when he hadn't slept in three weeks due to writing 300,000 words in a single November. It was definitely noted that she had a very valid argument.

Do you market the book any differently with it having two authors?
Not really. Kate's been involved in the marketing of Jeff's books from the start, and she doesn't have any separate resources for herself.

Do you write alone as a sole author of a book too? If so which do you enjoy most?
Jeff has one book by himself: Fire and Ice YA Press's Mina Cortez: From Bouquets to Bullets. He's worked with other collaborators, including on the Dawn of Steam series. We enjoy working together.

How do you decide who writes which part of the book?
Jeff definitely writes all the action scenes and most things involving spatial relationships, because Kate's legally blind and doesn't have any depth perception, so she has more difficulty with those parts. Kate tends to write a greater percent of dialogue.

If there's a disagreement, say about plot, title, cover etc how do you solve it?
We're still refining our resolution techniques, but mostly we each make our case and see if we can hash it out.

Do you enjoy writing with another author more than writing alone?
Jeff will note he far prefers working on collaborative works, with Kate as his most frequent and favorite collaborator on projects, be they novels, novellas, or short stories (having done at least one of all of the above with Kate.)
The closest Kate really gets to writing alone is a short story she did recently for a charity anthology in which she only got Jeff's contribution on the action scenes, so she definitely prefers the collaboration, too.

How do you find your perfect author partner to write with?
Luck, mostly, according to Jeff. We knew each other well in advance of starting in on writing together. When Jeff was working on getting his Dawn of Steam novels ready for publication, he needed an editor. Kate offered to help. The collaborative work began not long after.

Who decides which name goes first on the book?
On the novel and short stories with each other so far, we've kept the names alphabetical.

Do you get together in the same room to do the writing or is it all done via computers?
We love when we have opportunities to work together in person, and work flies out when that happens. We live across the country from each other, though, so most of it is done by computer.

In addition to the questions above could either one of you, or both of you tell me a little about your book in 20 words or less please?
A surprised Faerie Princess with ADHD needs help from her friends, including a torn-winged pixie riding a service crow.