Welcome to the world of Trafalgar and Boone, a world where airships battled in a Great War that was fought by soldiers who utilized magic and summoned monsters to do their bidding, a world that they must defend by working together to stop an evil far greater than either of them could ever have imagined. 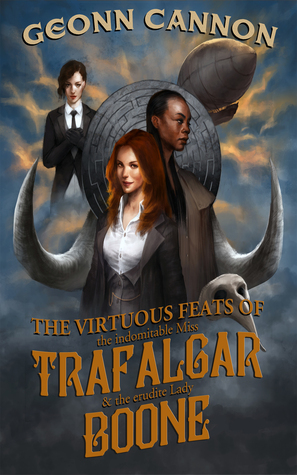 BLURB from Goodreads
In 1899, a secret society tried to use a young woman to bring an ancient evil into the world. Twenty years later they will return to finish the job.After the Great War, London is settling once more into the gentle routine of peacetime. The airships that once protected England's coast now ferry people back and forth across the Thames, the magically-inclined are free to return to their normal work, and those who seek treasures left behind by ancient civilizations are again free to explore. Dorothy Boone shunned a life of luxury to follow in her grandmother's footsteps by uncovering the mysteries of "the worlds that came before ours." When a package explodes upon delivery to Lady Boone's townhouse, she is drawn into an unlikely alliance with her nemesis, Trafalgar of Abyssinia, to find the culprit.They soon find themselves unraveling a plot that has left many of their allies dead and the rest in fear for their lives. A group of treasure hunters with a fiendish plot to take over England has begun eliminating its competition in order to fund an expedition to retrieve the last item they need for a summoning that will bring an ancient evil into our world. With no one else to trust, Trafalgar and Boone must put aside their differences and forge a partnership to stop their mutual enemy. If they fail, a world that still bears the scars of the Great War will be once again thrown into turmoil.

What made you decide to write a book in the Steampunk genre?
I love steampunk! I think my first real exposure to it was probably Cherie Priest's novel "Boneshaker", but the love really set in with a SyFy series called Sanctuary. It had a kickass heroine who used cool gadgets to fight creatures from the Victorian age until today. The idea of a woman brought up in a very proper society running around and chasing monsters really made me want to explore that genre.

Do you have the whole Trafalgar & Boone series planned out now or is it still a work in progress? Do you know how many books there will be in this series?
I try not to plan it out too much. I know a few things that will happen later on, but I want to leave room for the next book to surprise me. I don't know how many books there will be! At least two at this point. ;)

Who/What/How did you get your ideas for your Trafalgar & Boone Series?
I actually talked about this in the dedication! I had a dream that was either really short, or I only remembered a snippet of it when I woke up. Two women got onto an elevator with a man. They were all bloody, muddied, and beaten up. Their clothes were torn and they were completely dissheveled. The women looked at each other and started to laugh, and the man just rolled his eyes at them as the doors closed. I knew their names were Trafalgar and Boone. I mentioned it on Twitter and, with the help of three friends, I formed the basis for the novel.

Did you have to any of research for the Trafalgar & Boone Series? If so what/how did you do it?
Oh, so much of all kinds. The 1920s Dorothy and Trafalgar inhabit is different from ours (airships and magic are commonplace) so I can squirm by on a few of the facts there, but there's research for the artifacts they seek out and the creatures they discover, etc. Google is your friend! ;)

How long did it take you to write The Virtuous Feats of the Indomitable Miss Trafalgar and the Erudite Lady Boone in comparison to an individual book from one of your other book series?
It took about a month (just over, actually) for the first draft, and then probably another week for editing and revisions. That's a little longer than normal for me, due to the research required to get everything right so I wouldn't have to go back and fiddle with it.

How do you come up with the Title and Cover Designs for The Virtuous Feats of the Indomitable Miss Trafalgar and the Erudite Lady Boone Series? Who designed the Cover of your books? Did the same designer do all of your other series too?
The title grew from a desire to invoke penny dreadfuls and dime novels, the kind of popular fiction that would have been around in the time the novel takes place. "The Strange Case of Jekyll and Hyde," and "The Life and Strange Surprizing Adventures of Robinson Crusoe," and "The Fortunes and Misfortunes of the Famous Moll Flanders" get shortened to just the character names for convenience. I thought it would be fun to mimic that style to give the novel a bit more flair from the very beginning.
The covers are designed by a variety of people (Heidi DeCausemaker has done the vast majority), but I wanted something special for this novel. Again, to bring to mind penny dreadfuls with covers that were almost like movie posters. I knew that it would have to be something that was actually drawn, so I found an artist named Rita Fei who does simply marvelous work. Hopefully we can get her for future T&B covers!

Which character would you choose to be in the Trafalgar & Boone series and why?
Tough question, but out of this book I think I would want to be Beatrice Sek. She gets to go on all the adventures Dorothy goes on, plus she can do magic. Gotta love that!

Are the character names and place names decided after creation? or do you pick a character/place name and then invent their personality/traits?
A lot of times it's a bit 60/40. I'll have the idea for a character, then name them, and then let them figure out who they are from there. Trafalgar and Boone, like I said, came from the dream. But characters like Riley Parra and Claire Lance got their names first and everything built up from there. Giving the character a name and casting them helps me form them in my head (I cast all of my novels, but I try not to share too much so people can come up with their own ideas. In one novel I cast a brunette, and someone told me they saw the character as a blonde).

Are there any plans for the characters from your other series to feature in the Trafalgar & Boone series?
Never say never! But it would be tough with this one, since it takes place in such a different world (and a different time frame) than the other things I write. It would be hard to explain how Claire Lance ended up in London fifty years before she was born. ;) Most of my novels do exist in a semi-shared universe, however. Almost all of my standalone novels take place in what I call the “Squire’s Isle Universe,” with characters crossing over here and there. Underdogs takes place in a world separate from Squire’s Isle. And the “Radiation Canary Universe” bridges the Squire’s Isle and Underdogs worlds (Radiation Canary exists in both, but the two are separate from each other). It can get complicated.

Which of the book series you have written is your favourite? And why is it your favourite?
Hard to say, but I think it has to be Underdogs. I love the characters, I love their evolution, and it’s fun seeing what they get up to in every book. My past series (Riley Parra and Claire Lance), I set up a clear ending after five books. I figured that was a good place to end any series. After five, you start getting unwieldy and bloated with backstory, so it just seemed right to give them an ending rather than stringing readers along. With Underdogs, I wanted to keep them alive, so I decided the series would be made up of arcs. Books 1, 2, and 3 have a distinct arc that comes to a satisfying conclusion. Then with book 4, you can jump in with no foreknowledge and enjoy it just as much.
I also love it because it came so close to not existing. I wrote the first short story with the characters as a sort of obligation to a website for Halloween. I wrote a few more stories because they were fun, but then I put it on a shelf for almost six months before I decided to go back and see if there was anything there. I’m so glad I did!

If you had to choose to be a character from any of your series, which would you be and why?
I keep harping on Underdogs, but I’d be Ariadne Willow. The ability to turn into a wolf at any time? Absolutely! Plus she lives in Seattle, has a cool job, and her girlfriend is sexy. What’s not to love? ;)