REVIEW/PROMOTION - THE RAIN BY VIRGINIA BERGIN 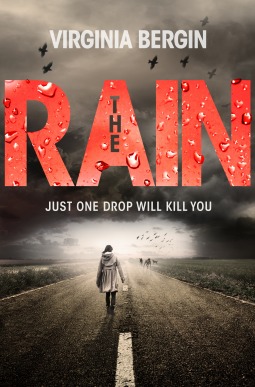 BLURB from Goodreads
It's in the rain...and just one drop will kill you.They don't believe it at first. Crowded in Zach's kitchen, Ruby and the rest of the party goers laugh at Zach's parents' frenzied push to get them all inside as it starts to drizzle. But then the radio comes on with the warning, "It's in the rain! It's fatal, it's contagious, and there's no cure."Two weeks later, Ruby is alone. Anyone who's been touched by rain or washed their hands with tap water is dead. The only drinkable water is quickly running out. Ruby's only chance for survival is a treacherous hike across the country to find her father-if he's even still alive.

INITIAL THOUGHTS
I'd had this book in both paperback and an ecopy but just hadn't had the time to commit to reading it yet. I love a good dystopian/post apocalyptic read and I think I have quite high expectations when approaching a book in this genre.

FINAL THOUGHTS
So I've started adding a "Final Thoughts" section to my review to reveal my more immediate thoughts upon the book as I have finished it without referring to my notes that I take as I read.
First of all I truly adored this book! Ruby Morris is a "normal girl" living within a modern day family made up of Step fathers and step brothers. Ruby lives with her mother Becki, step dad Simon and baby brother Henry aka Screetchster! Her biological dad lives in London and has a son with another woman who is 12 yrs old and called Dan. I was particularly fond of the tender moments between step dad and Ruby. Ruby ends up with the most unlikely travel buddy of the most uncool boy in school, Darius. I felt sorry for Ruby when she is somewhat betrayed by him.
This book ended up leaving me frustrated by a note Ruby reads. I'm also  asking loads of questions such as How will the world and society ever recover or work now? Will the rain ever become safe again? What will happen to Ruby next? 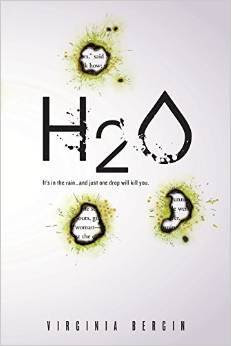 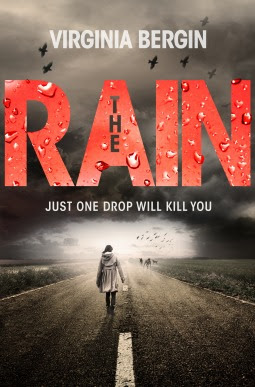 So there's different covers for the US and UK versions of the book.
The US one has a plain but opalescent white background with holes in the cover to represent the "burning", "killer", "toxic" rain. The holes are surrounded by green which makes the holes look like squiggly wiggly germs. I also think the O actually being shped like a water droplet is brilliant! Both books feature the same byline "Just One Drop Will Kill You" So do both books pass my "Would the cover make me pick the book up from a bookstore shelf"? As I've delved deeper about the UK cover within my review above this post. So the question really is would the US cover make me pick it up in a bookstore? Yes! I totally love both covers and they both maybe very different but the really both represent the book very well. I think if aiming at the YA market the US cover represents the book better where as aiming at a more mature older audience the UK cover is the best one.
Final Result: I adore each cover for different reasons so my final result on the "Cover Compare" is I love them both!!