REVIEW - THE DRESSMAKERS OF AUSCHWITZ BY LUCY ADLINGTON 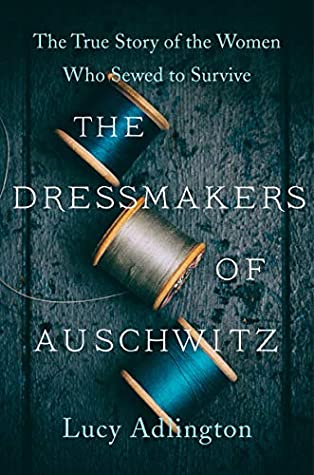 BLURB from Goodreads
A powerful chronicle of the women who used their sewing skills to survive the Holocaust, stitching beautiful clothes at an extraordinary fashion workshop created within one of the most notorious WWII death camps.

At the height of the Holocaust twenty-five young inmates of the infamous Auschwitz-Birkenau concentration camp—mainly Jewish women and girls—were selected to design, cut, and sew beautiful fashions for elite Nazi women in a dedicated salon. It was work that they hoped would spare them from the gas chambers.

This fashion workshop—called the Upper Tailoring Studio—was established by Hedwig Höss, the camp commandant’s wife, and patronized by the wives of SS guards and officers. Here, the dressmakers produced high-quality garments for SS social functions in Auschwitz, and for ladies from Nazi Berlin’s upper crust.

Drawing on diverse sources—including interviews with the last surviving seamstress—The Dressmakers of Auschwitz follows the fates of these brave women. Their bonds of family and friendship not only helped them endure persecution, but also to play their part in camp resistance. Weaving the dressmakers’ remarkable experiences within the context of Nazi policies for plunder and exploitation, historian Lucy Adlington exposes the greed, cruelty, and hypocrisy of the Third Reich and offers a fresh look at a little-known chapter of World War II and the Holocaust.

REVIEW
After having read this author’s other book which is fictional and called The Red Ribbon as soon as I heard about this non-fiction title, I knew I had to read it. I love that the cover of the book, it’s not a typical cover of this era and setting, there is not oppressive image of Auschwitz or its famous gate. The by-line of the book really sums up in a very simplistic sentence why these women survived.

I do not really know why I have such a deep-seated pull, and compelling desire to read books about the Holocaust, other than I think what happened to these people who were just like anyone else were suddenly chosen, isolated and put under such horrendous daily torture just because of their religion, really deserve to have their stories read, remembered and passed on to every other generation to follow. A lesson needs to be learnt from these historical facts, memoirs and even the fictionalised stories aet at this time too.

I really loved how Lucy introduces Mrs Kohut, a 98 year old woman, who is the last surviving dressmaker from the fashion salon created at Auschwitz concentration camp. I don’t know if was done intentionally or not but by not giving the first name of Mrs Kohut as a reader you end up reading the events that happened not knowing which person is Mrs Kohut. You find out much later into the story.

Referring back to the by-line of the book, “The True Story of the Women Who Sewed to Survive” as it was the simple fact, they could sew that saved their lives. Saying that it doesn’t mean these ladies had a much smoother or easier life within Auschwitz. They were still subjected to the same horrific conditions and being under the constant fear of being noticed and punished for some minor infraction on the rules the Nazis made. Or even just beaten and tortured because a Nazis officer felt like it. They were also answerable and in danger from even “one of their own” put in charge of either their work detail or the building they slept in referred to as their Kapo.

It seems ironic that the Nazis men and women (as there were female guards at the concentration camps too) wanted to rid the world of the whole Jewish race, made them surrender businesses and all possessions of any value, yet found it acceptable to take a few women who could sew and have them make clothes for them. The Nazis valued clothing highly. The author shares the fact Eva Braun, first Hitlers mistress then later wife, actually had her wedding dress delivered across a burning Berlin just days before their suicides to wear with her designer shoes. Joseph Goebbels wife, Magda is quoted as having said “What a nuisance that Kohnen is closing . . . we all know that when the Jews go, so will the elegance from Berlin. These women, Emmy Goering, Hedwig Hensel-Hoss and Magda Goebbels, knew about the victimisation of the Jewish people yet decided the best way to cope with this knowledge was to turn away from it. Though these women and their men were realising that a lot of industries, including the clothing industry were heavily, reliant on a Jewish workforce.

There were a lot of “shops” created within the concentration camps that the Jewish prisoners worked in as well as doing the outside heavier manual laboured jobs too. There was a furrier’s cutting shop at Ravensbruck. The furs were recut and made into items such as jackets and gloves for the soldiers. The women working often split seams and hems whilst altering the items and found jewellery and valuable that had been hidden.

Though Hedwig Hensel-Hoss, wife of the man in charge of Auschwitz, Rudolph Hoss is credited as creating a small fashion salon for the wives of the Nazis elite, when reading the details Lucy has researched and listened to from Mrs Kohut it was truly the invention of a sharp, quick witted woman called Marta who had been working as a dressmaker for Hedwig. Marta used her own opportunity to help other less fortunate in the camp. Marta managed to get agreement for another seamstress. When other SS wives saw the garment’s Hedwig was having made, they became envious. Hedwig then went on to expand her attic sewing shop into a select fashion salon.

There were many that could sew, in fact figures state that out of ten thousand women there must have been at least five hundred. Marta used her own position to suggest and choose other women she could depend upon to sew. Such as a woman called Irene who was chosen because Irene’s brother Laci had married Marta’s sister Turulka. So, Irene was chosen, then Irene suggested her good friend Bracha. Bracha was chosen and revealed she had a sister who could sew and on and on it went. Lucy reveals there were 25 young girls and women that ended up working in Hedwig’s fashion salon.

The author Lucy had already done a lot of research about the dressmakers for her fictional book The Red Ribbon, and had found just an incomplete list of female names, Irene, Renee, Bracha, Katka, Hunya, Mimi, Manci, Marta, Olga, Alida, Marilou, Lulu, Baba and Boriskha. Lucy thought she had found out all she was going to about these women until her book actually released and she began being contacted the families of these women. Suddenly Lucy found herself with a new wealth of information. As Lucy did more research and discovered more details and met Mrs Kohut, she shares all her discoveries with us the reader in this book.

It’s hard to describe how I felt reading this book, I found it difficult to read about the way these innocent young girls and women were treat by the Nazis and their sympathisers. At times it really had me questioning if I wanted to read such a truthful, bluntly honest book about the realities of the harsh conditions these women tried to survive within. Then I became angry with myself, in that all the horror these women were put through and I was feeling saddened reading about it. What on earth did those young girls and women feel every day, day in day out, wondering where the next morsel of food was coming from and when the next beating, or the last call to be sent to their death would be. I strongly believe these books need to be written, and read and continue to be remembered, talked about and lessons learnt. If its not the wrong thing to say I honestly ended up “enjoying” discovering more about these women, the real women and their names behind the fictional story Lucy wrote based her book The Red Ribbon on. I could go on and on talking about this book, but it needs to be read by as many people as possible, so I will say I have only scratched the surface of the book in my review. I also know I rattle on and on when I read books set in this era, saying these are the titles that should be on school reading lists, discussed and talked about in schools, but I believe that to be right. These atrocities should never be allowed to occur again.

My immediate thoughts on this book were thank goodness there were prisoners such as Marta who thought quickly and managed to make Frau Hoss think it was all her own idea to open a fashion salon, and use free Jewish labour. I love how Marta's quick thinking saved lives. Sure, it was people she knew from her own town etc but you can understand her wanting people who she knew that were reliable after all it was her neck on the line too!!"

To sum up, this book is an amazing read, brilliantly written account using extensive research and first-hand accounts from the very last surviving dressmaker of Auschwitz. The book left me feeling like I wanted to reach through the book and hug Mrs Kohut, to thank her for sharing her story. How must she feel being the last one alive, had she already told her family about what she went through and how she managed despite the odds to survive. I am not ashamed to say the book had me in tears, especially when I thought had Lucy not written The Red Ribbon, that the true story of the Dressmakers of Auschwitz may never have been fully told.

My final, final words on the book have to be that it really is a very moving, emotional read, told in a sometimes brutally honest, non-romanticised way, that tells the truth of some of the Holocaust horrors inflicted on a group of amazing, determined to survive women.