REVIEW - YOU DID WHAT BY TOVA LEIGH 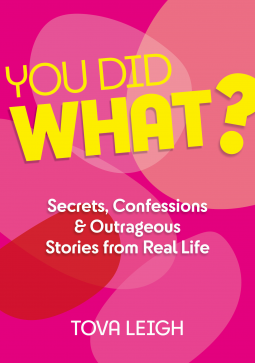 BLURB from Goodreads
"I was living with a nasty boyfriend who complained I didn't put enough pepper in his egg sandwich. So I dried out some hamster poop and chopped it into tiny pieces. He said it was delicious. Revenge is sweet!"

Have you ever wondered what other people get up to when they think no one's looking? Do you have a mortifying secret of your own you've never dared share? Whatever scandalous incidents lie hidden in your past, don't worry: this wonderful collection of funny, sexy, hair-raising and heart-warming confessions will reassure you that you're by no means alone.

These confessions have all been curated by bestselling author and digital creator Tova Leigh, who explains just why we should stop being ashamed of our secrets, and instead have the courage to make ourselves vulnerable, speak out and connect. In this ultimate page-turner, there are parenting confessions, sex confessions, workplace confessions, revenge confessions ... not forgetting the all-important bodily fluids confessions! You need never feel embarrassed by your own slip-ups and misdemeanours again.

"So I was married for nine years and after the divorce, when I was ready to sleep with other men, I signed up on Tinder. After a few dates I was thinking ... why do I give it for free, when men will pay for it? So I became an escort! I did it for about five months and I must say I had the best time ever ... made a lot of money and met some really nice interesting people."

REVIEW
The bright colourful cover first drew my attention to the book, then the intriguing title of course! Once I read the blurb, I knew I had to read the book!

I’ll be totally honest prior to this book I hadn’t heard of Tova Leigh! (Sorry Tova!) However, since reading this book I have started following her on all her social media too! I also hope to check out some of her other books soon too!

The book is a book of funny stories crossed with confessions of how people have exacted their revenge in a range of incidents. I mean we’ve all had someone be either nasty or irritating and secretly delivering some sort of retribution…haven’t we? I mean I know I have! Be it an ex, a negative boss or someone else that has upset you in some way.

From things like going into a different room to eat the last biscuit in the pack, so you don’t need to share with the children that have been pushing your buttons by squabbling all day….or, something you’ve done at work to someone who annoyed you. There are loads of different stories all separated into different sections. There are some really “out there” ones, such as the one described in the blurb where the woman ends up signing up to be an escort to get paid for dating, rather than just dating in the more usual way.

There are items being put in drinks, and a really popular one seems to be using your significant others toothbrush to clean the loo, or their razor for bikini line shaving and then putting it back on the shelf for them to use!

A parenting confession that I cannot resist sharing and really cracked me up was I’d had my first child and was up at all hours of the night breastfeeding while my partner (now ex) was fast asleep snoring his head off. One night I felt pure and utter rage toward him and toward the fact that I was so sleep deprived. I finally put my daughter down in her crib, but she just wouldn’t settle and he was still fast asleep snoring, so I sat bolt upright and turned around and slapped him around the face. Then I lay down and went back to sleep and let him deal with the baby seeing as he was now wide awake. It was the best few hours of sleep I got and I felt so much calmer after. He wasn’t happy with me at all but I genuinely didn’t care.
I was already laughing out loud whilst reading the section on “Parenting Confessions” and felt seriously hooked into wanting to read more. Some of the confessions are soooo bad but so very, very, funny!

I’ll be honest after working years in the hair & beauty industry I have heard some revenge tales such as pouring expensive aftershave down the loo, hiding fish or seafood in or behind curtains and furniture. I think that’s what really makes this book funny, the majority of people have either heard some payback stories or if they are totally honest may have retaliated or at least seriously thought of it at some point in their lives.

One piece of advice be prepared for the strange, or inquisitive looks you are sure to get whilst reading this book as you snicker, giggle and belly laugh your way through it.