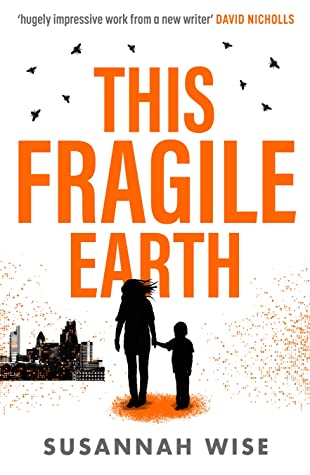 BLURB from Goodreads
Not long from now, in a recognizable yet changed London, Signy and Matthew lead a dull, difficult life. They’ve only really stayed together for the sake of their six year old son, Jed. But they’re surviving, just about. Until the day the technology that runs their world stops working. Unable to use their phones, pay for anything, even open the smart door to their flat, Matthew assumes that this is just a momentary glitch in the computers that now run the world.

But then the electricity and gas are cut off. Even the water stops running. And the pollination drones – vital to the world, ever since the bees all died – are behaving oddly. People are going missing. Soldiers are on the streets. London is no longer safe.

A shocking incident sends Signy and Jed on the run, desperate to flee London and escape to the small village where Signy grew up. Determined to protect her son, Signy will do almost anything to survive as the world falls apart around them. But she has no idea what is waiting for them outside the city…

PURCHASE LINKS
Amazon US (not yet available)
Amazon UK

REVIEW
It was the cover that I first noticed, the rather stark image of what turns out to be two of the main characters Signy and her 6 year old son, Jed. From the blurb I like that the book is a “different” type of “post-apocalyptic” I guess the correct term for this book is apocalyptic, as it is set at the time of the electricity going off, so it’s set as everything is “going to pot” rather being after the “event”.

The book is set in a futuristic London where climate change amongst other things have changed beyond our current day status. In the world in this book there are special drones called pollination drones that have taken over from a decimated bee population. Technology has advanced, everything is worked electronically, from cars, to getting in the door of your home. Society is used to everything being available at the touch of a button or electronic palm reader/keyboard. The main characters are Signy and her husband Matthew, their marriage isn’t great though they put on a front when around friends. They are really only staying together for the sake of their son, Jed. The book begins with Signy taking her son, Jed on one of their familiar biking outings to Queen Mary’s garden and to what Jed refers to as “Fairy Island”. All the roses are artificially made and so have a synthetic smell like acetone, which Signy hates the smell of. Jed enjoys seeing all the different coloured roses, shades of red, pink, oranges and mauves. Of course, Jed doesn’t know what roses smelled like “before”. There are also some hybrid roses which have petals which flash neon, electric blue and onyx. All these roses are pollinated by the pollination drones that have so far replaced the bees.

Signy isn’t relishing the prospect of going out with friends, James, who is Matthew’s best friend and Ava, Signy’s best friend who they match-made between and who are loved up, whereas their own marriage is sadly somewhat stale, that evening and she doesn’t enjoy it all. The restaurant isn’t great. It is that not-so-great evening that Signy is dwelling on whilst Jed takes a pee in the concrete block toilet when they hear a thudding and banging noise on the outer wall. When they investigate, it is a drone continually bashing itself up against the concrete wall. This turns out to be the just the first strange thing that happens. When Signy and Jed get home, Jed slaps his hand on the special palm plate that unlocks the apartment door and as usual he is hungry so Signy heads straight into the kitchen and notices a weird, not good odour coming from the mostly defrosted freezer. Next Signy claps her hands shouting “On” but the lights do not respond. It turns out there is no electricity, and it’s not just a small local issue either. Signy tries to contact Matthew but her call goes straight to voicemail. It soon becomes apparent that technology is no longer working, from the electric for the fridge, the lights, the water filter etc. Signy does manage to get online via her laptop as that is powered by the SOLA roof panels where she reads an article explaining the wide spread power outage and the assurances from the government that everything is in hand and will soon be back to working order.

When Matthew finally gets home, he explains to Signy that the car had died and he’d walked all the way home in the dark! He explains to Signy that the underground, trams and Maglev are all out of action too. Matthew finds an old battery radio and they both listen to find out what is going on. “How do you feel about this situation?’ a broadcaster was asking someone. ‘Oh, not so bad. I’m not worried about owt.’ A woman with a Hull accent. ‘Do you remember the blackouts in the seventies?’‘ “I do.’‘ “And if you don’t mind me asking, how old are you?’‘ “I’m a hundred and one.’‘ A hundred and one. Do you worry about being cold tonight? Falling over in the dark?’ Matthew laughs at the radio. Matthew tries to reassure Signy that everything will be back to normal tomorrow. . . . but it isn’t!

Signy goes to local shops, to buy some provisions from the few items left, it’s not long until shops are running out of stock and basic supplies, and people are becoming, nervous, reckless and things soon become dangerous and violent. When Matthew intervenes in a fight, where a man is bullying and being violent towards a woman, he sets off an awful chain of events for his family. As the cover shows Signy and Jed end up undertaking the long and arduous journey to Signy’s mother’s rural home. Signy secretly hopes he childhood best friend Gethin will also have a similar idea of heading to their childhood rural homes. Gethin will know what to do and they can hunt for food and live off the land as they did as kids. It’s whilst travelling that they encounter the worst of society, who don’t care who they rob or hurt in the process. They also witness the increasingly strange behaviour of the drones. It’s almost as if the drones are in charge of changing the world and the people in it, rather than the drones and technology serving the people and their wants and needs.

I really enjoyed the writing style, despite it being quite different to what I usually read. It felt a little odd at times, but that did fit the futuristic feel of the book. Chapters were labelled as what day it is since the “event”. There are some really space-age-type of occurrence’s mentioned yet within the plot they are totally plausible. Then there are the realistic conversations between Matthew and Signy when they swear and their son, Jed tells them off!

I also loved the sarcasm/irony of Signy telling Jed to eat his carrots as they help you see in the dark. Jed says he doesn’t need/want to see in the dark, and Sygny thinks that if the lights don’t come back on he may rethink that!

My thoughts as I finished reading where that I found the book reminded me of a Ray Bradbury book/story that was read to me whilst I was much younger (junior school age). I also liked the theme of the robots/drones allowing those to live who were kind to the planet and other animals. I guess you could call this a cautionary tale perhaps about climate change and alternate futures that rely perhaps a little too much on technology.

Summing up I don’t know how else to describe the book as strange, alien-esque, weird but good. Very Ray Bradbury-esque with some Tale’s Of The Unexpected thrown in too. The book certainly kept me reading to the very end.