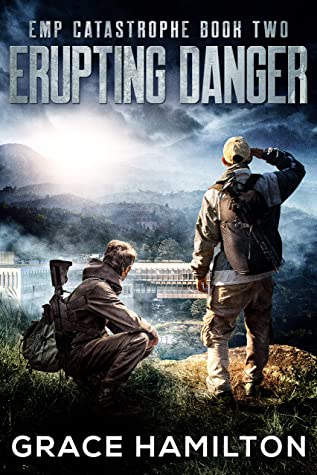 Title: Erupting Danger
Series: EMP Catastrophe
Author: Grace Hamilton
Genre: Post-Apocalyptic, EMP
Release Date: 12th May 2021
BLURB from Goodreads
The lights are out for good…After an EMP knocked out power around the globe, Matthew Riley and his family are finding their way to survive while realization of their dangerous new reality sinks in. It was a struggle to reunite in the immediate aftermath, but the fallout from the dangerous journey may be even worse.Other desperate souls are converging on any place that might offer hope, and the Rileys’ hotel in Galena, Illinois, is a prime target. With food running short and medicine almost out, the Rileys will need to find supplies. But they’re not the only ones looking.While the family works together at the hotel, Matthew’s brother-in-law, Max, works to escape from prison to reunite with his family and the relative safety they offer. But dangerous enemies have their eyes on him and may put everyone at risk.With resources running out, family is the only bond that can be counted on. But those bonds are strained and frayed as the tensions of the new world begin to pull them apart. How can one family survive when the world has turned upside down?
Goodreads Link
PURCHASE LINKS
Amazon US
Amazon UK
REVIEW
After reading bk1 of this series and loving it I certainly wanted to read this one as soon as I could. The cover fits well with the first book and I would say depicts Matthew and his father David on the cover. Even if I hadn’t read bk1 the cover would make me pick up this book to learn more about it.

It is so hard to review this book without giving spoilers and I guess with referring to things that happened in bk1 there may be some small ones revealed, so be warned, only read ahead if you have already started this series.

This book basically picks up where bk1 left off with Kathleen and Allison faced with the daunting prospect of having to walk past some rather rough looking bikers who are looting a van of food & supplies that obviously broke down when the EMP hit. With their previous experience with gangs, that they have met along their journey, I’d say they are right to be super cautious. Kathleen instructs her rather traumatised daughter Allison that if things turn ugly, she must run off and leave her mother to get help from the hotel. It’s hard to believe they have come so far and have adapted and survived to be so close to home and then be faced with this hopefully last barrier between them and their home and family. When the crucial moment comes and Kathleen believes things are going to turn nasty, she signals Allison to run! Matthew is both elated and devastated to see his daughter running towards him on the property surrounding the hotel. He is happy and relieved to see Allison yet immediately worried and thinking the worst when he realises her mother, his wife, Kathleen is not with her. He takes Allison inside the house where his mother Ruth helps to calm the hyperventilating teen down long enough to get a rough idea what has happened. Naturally Matthew heads right off to help his wife.

What occurs between Matthew & Kathleen and the biker gang could end up coming back to haunt them later as they try to survive and make allies. There is also a brief mention of Samuel who had held Ruth and Patton hostage in their own home.

Though I went through sympathy and then cursing his character Max is certainly an interesting individual, and is pretty central in this book with his added point of view. When Max realises something is badly wrong inside the prison, with only a few of the same guards doing the rounds with meals being delivered to cells he decides he needs to get out sooner rather than later. It seems it’s only an ever, shortening matter of time before the prison guards are overcome and the prison is taken over by the prisoners. If the prisoners take over and the imprisoned Cartel members have free rein, Max knows they will come after him and there will be no guards to drag them off him. Colin has already made his feelings crystal clear with the amount and frequencies of beatings he has doled out to Max. If Colin and the other Cartel prisoners get hold of Max, they may well kill him. When Max does escape and he either naively or recklessly heads right for his sister Kathleen and the Hotel on the outskirts of Galena. At times in the book, I didn’t know exactly what to think of Max and his character. He without a doubt loves his sister and his niece and nephew, but he doesn’t think things through. It soon becomes clear if he thinks he can leave his problems behind he is naive as he encounters Colin on more than one occasion in this book. The relationship between brother and sister is quite interesting. At first it seems Kathleen can see no wrong and feels sorry for Max, almost mothering him, Max on the other is quite wily and tells Kathleen only the details of his journey that he wants her to know. It’s not long until this has to quickly change, when because of him, Max’s young nephew, Patton is placed in serious danger.

Looking back at the book after finishing it, a lot of it is about the different relationships between the featured characters. Matthew and David are continually butting heads in this book almost vying for the “alpha male” position. Kathleen is closing herself off from her husband Matthew hiding what happened to herself and Allison. At times, Kathleen appears paranoid and is really quite nasty towards Jade, declaring she doesn’t want her to stay and continually saying she isn’t part of the family. Though her attitude softens when she see’s Jade put herself between Allison and Patton and imminent danger. They also have a heart to heart which actually ends up helping Kathleen come to terms with what she did to protect Allison in bk1 and results in her finally opening up to Matthew. However just as Kathleen is becoming more accepting of Jade, Matthew turns on the teenage girl demanding she leave despite the protests from David, Allison and Patton.

New character to the book is Wyatt Carpenter who is living with a small group of people at the Carpenter gun club. The fact he reaches out to the Riley family at the River Rock Hotel. To begin with Matthew insists the hide the attempt of contact and invitation to meet up with those at the Carpenter Gun Club, but once again he butts heads and finds himself on the opposing die of an argument with his father, David.

Theres a lot of instances where the characters head off alone, not thinking of any possible consequences and end up landing themselves in trouble, needing to be rescued by the others.

These incidents along with the Riley families experience with bad people out to take what they have from them, do eventually show them that they do need allies and friends in the area. They just need to choose them wisely.

The book ends on yet another great cliff hanger with David experiencing chest pains and another probable heart attack. Its not just the immediate attack that presents worries and difficulties, it sets Matthew off thinking about what will happen when David’s medication runs out? What if someone is seriously injured?

My immediate thoughts upon finishing the book were that I had found it to be
action packed, with amazing imperfect believable characters, set in a world that has suffered a catastrophic change.

To sum up there is still much to do at the River Rock Hotel to ensure it’s a place of safety for his family, along with creating a wider circle of friends with the necessary knowledge and trades that will make surviving and living somewhat easier. All this and more certainly make me want to read the next and final book as soon as I can!