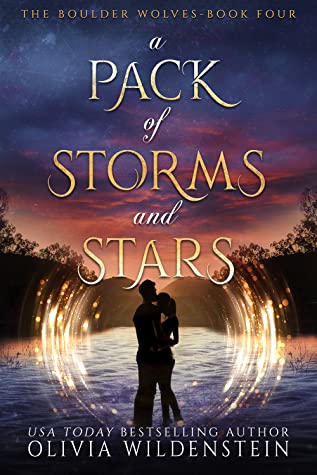 BLURB from Goodreads
Till a mating link do us part.

That was rule #1 of the arrangement I struck up with my Alpha a few weeks after he arrived in Beaver Creek to solve a pack murder. Liam Kolane and I would have exclusive fun until my wolf clicked with its true mate or until I found a male keen on long-term, since Liam had zero interest in forever.

Well, he and I crashed and burned long before another male came along, because I broke our one and only other commandment: I got attached. And not only to my scarred and aloof Alpha but also to his sweet nine-month-old son.

The problem with breaking up with your Alpha? You remain his shifter, so you’re stuck seeing him every day. Another problem... some deviants presume he likes you enough to save you.

Good thing I have four older brothers who taught me to save myself.

REVIEW
I find the cover of this book really attention grabbing and it sits really well with the covers for the rest of the Boulder Wolves Series. As soon as I had this one on my tablet, I wanted to read it. In fact, after finishing reading my previous book near midnight, I still couldn’t resist reading a chapter or two of this one! As soon as I read those first new chapters I knew I was hooked! I usually read at night, but I found myself reading this one whenever I got the chance, during the day too! Be warned it is addictive reading!

This book starts by telling us the story of Nikki Freemont’s accident, she is on the back of her then boyfriend Grant’s motorbike and they crash into a tree. Nikki is injured so badly that she almost has to have her leg amputated which is serious enough for a human, but for a shifter that would be even worse. Nikki is left with a weak leg and living at home with her parents. Her plans to share a cabin with her brother had to be put off as she needed her parents help and support whilst they nursed her back to health. The Freemont family are close and regularly meet up and eat together. Nikki is the only girl in her family and it’s a bit of an understatement that since her accident, her parents and brothers are even more protective over her, which irritates her no end.

Then the book flicks to the present day/18 months later and Nikki and Adalyn are laughing and joking, being both great friends and soon to be sisters when Adalyn marries Nash, one of Nikki’s twin brothers. Adalyn working at her grandmother’s hairdressing salon which is called “Hair Of The Wolf”. Adalyn is talking to Nikki on the phone about the girl that’s been murdered in the woods, This wolf, or shifter needs to be stopped as soon as possible! This means the Alpha Liam Kolane visits Beaver Creek earlier than his planned moving in to the new homes being built there for the rest of the merged packs, when Cassandra Morgan was defeated. As Liam’s Beta in Beaver Creek, Nate, Nikki’s eldest brother, will be closely involved in the mysterious case too. It’s as Nikki is rummaging through her handbag for her car keys. It’s whilst in this state of disarray that Niki sets her eyes on an attractive male she hasn’t seen before, it is Liam Kolane, though she doesn’t recognise him as her Alpha, as she has never seen Liam before. When he became Alpha, she was in hospital. Nikki certainly likes the look of him and then see’s the baby carrier with the cute baby in it, and kind of shrugs her shoulders and doesn’t give Liam much thought other than she knows this good-looking male is “shifter” other than she will ask her brothers who he is later at dinner. In fact, that night at dinner, Nikki is describing the shifter she saw to Nate as a possible “rogue wolf” that could have killed the girl in the woods, when the doorbell rings. Which is unusual, because in Beaver Creek, no one rung the doorbell. Nikki is certainly shocked to see Liam and becomes even more mortified when he reveals he has heard her describing him as a possible murderer to her brother, his Beta, Nate! As the Freemont’s usually eat together it is no surprise that Liam is brought into their home. Meg Freemont is immediately besotted with Liam’s baby son, Storm, and volunteers to help care for the baby when the Alpha is busy. The instant interest and attraction Nikki felt for Liam returns as now she knows who he is, she knows his story that his baby boy, Storm’s mother was human and died in childbirth. Nikki is quite besotted, but is looking for a true mate relationship like that of her parents. Unfortunately for Nikki Liam doesn’t want commitment, he doesn’t believe he will ever have a true mate. They keep their attraction secret, even when it develops into what Nikki would call a relationship, Liam insists it’s just hooking up they don’t tell anyone, though it’s clear to see to some of the others around them what is happening.

I could go on and on about this book, but of course I don’t want to reveal anything too spoiler-esque. This book has so much going on! There’s the serious investigation into who/what is biting/killing people, then the girly friendships with Nikki, Adalyn and Bea. Then there’s the caring family stuff and humour of Nikki’s nickname that her family call her, pinecone, and how she earnt it. Nikki also earns the nickname Knick-knack from Lucas when he comes over to Beaver Creek to help with the “girl in the woods” caseEach of the Freemont brothers have their own individual personalities, issues, relationship and problems. There’s the “is it a relationship”, or “is it a hook up” between Nikki and Liam. Nikki and Liam both have pasts, and scars they are dealing with as well as the complication of Storm.

Storm has to be one of my favourite characters, he is such a pleasant baby. I find it funny when you read the baby/cub type interactions. Like all adorable babies, Storm soon has everyone wrapped round his little finger. Nikki, tries her very best not to become too attached and is heart broken when she is accused of coaching Storm into calling her mum!

Liam has some difficult decisions to make both for himself and for his newly combined pack. You see a very mature, caring version of Liam, but you also see an insecure man trying to prevent himself and his son from being hurt.

My immediate thoughts upon finishing this book were that I had been sat at the edge of my seat quite a few times. I read well past midnight twice and even did some day time reading with this book....and .....I love, love, loved it! Though it has made me want much more! Boulder Wolves.....Oooo I've had a thought about Lark....and Storm.....can't wait for more!! I knew I had missed the Boulder Wolves but hadn't quite realised how much!

Summing up A Pack Of Storm And Stars has a fantastic mix of mystery, drama, sadness, betrayal, death, romance and danger all rolled into another amazing installment in the brilliant Boulder Wolves Series. I honestly don't want the Boulder Wolves stories to ever end!!