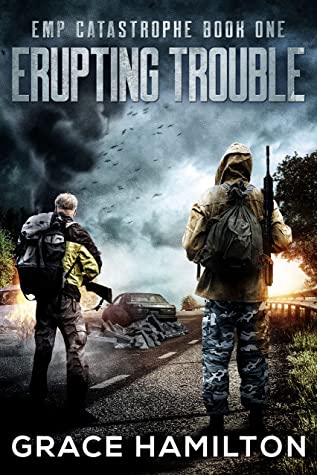 Matthew Riley wants to believe that people will come together in times of great struggle, but as panic and chaos set in after a massive EMP event, he has to face the fact that the only people he can trust are his family. His ailing father, David, an Army vet, has the skills the Riley family needs to survive in the dark new world, but with no medication for his heart condition on hand, keeping him alive may be an impossible task as they journey home from what was supposed to be a simple day trip.

She’ll keep her daughter safe and reunite her family…

Kathleen doesn’t share her husband’s optimistic view of humanity. When the power goes out during a visit to her brother in prison, she and her teenage daughter will need to find their way out and start the long journey back to Galena, IL, in the hope they can reunite with the rest of their family.

With the rest of the Riley family gone, it’s up to Ruth and her grandson, Patton, to keep their newly renovated hotel safe for the family they know is coming their way. But food is running low and some see an elderly woman and a pre-teen boy as easy pickings.

In a broken civilization the only way to survive is strength in numbers. One family is determined to work together in this new world, but will they be able to defend themselves against desperate survivors?

REVIEW
The cover gives the biggest clue to the genre of this book, the carnage of cars, the two figures with guns and backpacks. The cover certainly makes you wonder who the two figures are and why and where they are travelling. As well as the questions it raises about what has happened that has abandoned cars & carnage on what looks to be a highway/motorway. So, the cover certainly drew me in to read the blurb, and I have read other books by this author in the past too.
I usually enjoy this type of “apocalyptic event” and what happens after scenario and there seems to be a wide range in ages of characters so I thought it would add another level of “interesting” to reading the book, seeing how those older/younger deal with what happens.

Something happens, both solar flares and terrorism are mentioned in the book. Though this book doesn’t solve or uncover exactly what happens it is more centred on how the main characters, the Riley family cope. The Riley family are spread quite far away from each other when the “event” occurs. All the family members are in dangerous situations for different reasons. Matthew and his father David, an ex-army veteran who has a heart condition that he is particularly stubborn about find themselves stranded 80 miles from home in Galena at the River Rock Hotel. They are in Wilson’s antique store when the lights suddenly go off, then they discover their car will not start either. Matthew and David soon realise that if they want to get back to David’s wife Ruth, and Matthews twelve-year-old son, Patton they will have to set off walking! Which bothers Matthew as his father’s heart isn’t in great shape meaning walking will be a struggle for the stoic man. Unbeknownst to Matthew his father has been particularly stubborn and rather naively left his heart medication back in the Hotel in the Galena mountains. What Matthew initially viewed as a difficult journey, changes into being a dangerous, life threatening one. If that isn’t enough to worry about, his wife, Kathleen and his daughter Allison are not home at the hotel either, they are visiting Kathleen’s brother, Max in prison. Max had been caught, his first offence as a small-town drug dealer/drug mule. Kathleen finds it difficult talking to her brother, not really knowing what to say. Kathleen is already nervous about the hunted look on her brothers face and the lack of his usual carefree attitude. Then the lights go off! Kathleen quickly realises from the guard’s reactions that they are no wiser as to what is happening….and are unsure what to do. Initially the guards plan to keep the visitors in the prison too. Max tells his sister when she gets out she needs to go retrieve a bag he has hidden in the Chicago area, he then makes a stand and when other prisoners seem to agree and pressure the guards the visitors are released to go on their way. It’s then Kathleen realises what danger her brother is in and finds out her car along with the majority of peoples around them will no longer start. Kathleen decides they need to head home to Galena and buys them some bikes for the journey. Allison being a “typical teen” is irritated and sulky when her mother explains they cannot go and visit her friends as she had promised before “it” happened, even when her mother explains how serious the situation is that they are in. Allison soon changes her mind when she is surrounded by young males trying to take her and her mother’s bike from her whilst her mother is retrieving the bag Uncle Max told her mum about. Kathleen retrieves the bag her brother has told her about, both cursing and thanking him for its contents and returns to what could turn into a dire result if she doesn’t handle it swiftly and correctly.
When thinking about “home” the newly purchased River Rock Hotel, Matthew, David, Kathleen and Allison are all under the impression that everything will be fine there, all they need to do is to get back there and everything else will be fine.
It is Ruth, David’s wife, Matthew’s mum that is at home with her grandson, Matthew & Kathleen’s youngest child Patton. Ruth and Patton try to ignore the lack of electric at first and continue their cleaning in the hope the problem is temporary. When it becomes apparent it isn’t temporary Ruth sets about first preserving food, then going shopping down the mountain in Galena. It’s on the way back they spot a van that was probably on its way to deliver their grocery order when everything stopped. They continue with home their purchases, and decide to head back to take some items from the van. Its on that return journey they come across Samuel, who Ruth instantly feels negative, dangerous vibes from. Ruth gets herself and Patton away from him as soon as possible and they lock up and lay some homemade alarms around as neither of them feels particularly safe.

Other than the main characters one of my favourite individuals in the book is Rhonda who is an old friend of Kathleen’s. The two women lost contact, leaving things not on great terms. Kathleen takes a chance on turning up on her friend’s doorstep, as if anyone can help and advise her how to get home to the River Rock Hotel it is Rhonda as she was always into prepping for events just like this one. I also felt sorry for, and couldn’t help liking Jade, despite her way of thinking and her somewhat shady past. I can’t help feeling she isn’t wholly bad, more perhaps a victim of her circumstances. The character I loved to hate was Samuel, you’ll learn why when you read the book. I’m not so sure I would be so lenient on him after what he did. I almost forgot Jordan, who recommended some basic hiking/survival gear to Matthew & David. I adored the reference to the old credit card machine, the three different pieces of coloured carbon copies, the whole sliding the top slab bit over and handing Matthew the pink slip. It reminded me of my early working years and my battles with the manual machine!!

I thoroughly enjoyed seeing the relationships within the Riley family. The similarities and stubbornness between David and Matthew. The way David is more cynical and Matthew the tolerant one who wants to believe the best of everyone and give them multiple chances to redeem themselves, but I can’t help wondering if his “soft heart” could end up costing a life somewhere along in this book/series. The relationship between Kathleen and her brother Max was written so well, with both of them attempting to keep a brave face on for the other. Then the way Max sticks his head above the parapet, getting himself “noticed” with the guards and prisoners when he speaks up to get his sister and niece out of the prison before things turn into a riot. I’d love to see more of him as the series goes on, but maybe being “noticed” could have put him in the crosshairs of those he was trying to stay hidden from.

As we soon learn strange times, make odd people do awful things. In fact, this event begins to make a lot of people act out of their normal range of behaviour and moral compass. The book follows the different character duo’s, how they react when things go wrong and what they do to protect themselves and their loved ones.

My immediate thoughts upon finishing this book were Oh wow! What a time/place to end!!! Can't wait for bk2

Summing up this seems like a great start to a possibly amazing series. This book ended with me still having lots of questions and hopes for the characters introduced in this book. Really looking forward to what happens next. How will the River Rock Hotel and its owners survive, and what other dangers will they be facing? And I’d love more Rhonda and Max….really loved reading this book! The ending of this book certainly left me wanting more, more, more!