REVIEW - WE ARE SATELLITES BY SARAH PINSKER 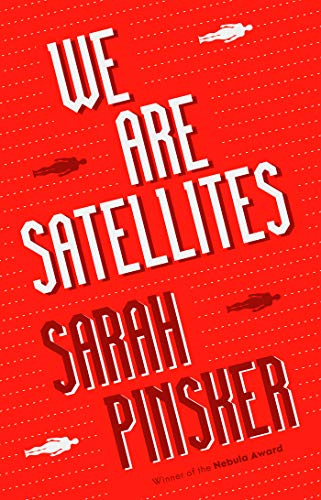 BLURB from Goodreads
Everybody's getting one.

Val and Julie just want what's best for their kids, David and Sophie. So when teenage son David comes home one day asking for a Pilot, a new brain implant to help with school, they reluctantly agree. This is the future, after all.

Soon, Julie feels mounting pressure at work to get a Pilot to keep pace with her colleagues, leaving Val and Sophie part of the shrinking minority of people without the device.

Before long, the implications are clear, for the family and society: get a Pilot or get left behind. With government subsidies and no downside, why would anyone refuse? And how do you stop a technology once it's everywhere? Those are the questions Sophie and her anti-Pilot movement rise up to answer, even if it puts them up against the Pilot's powerful manufacturer and pits Sophie against the people she loves most.

REVIEW
I have seen two covers for this book and prior to reading the book I was 100% that I preferred the cover with the woman and child on it. Having read the book I think that the red cover fits the book just as well if not better as it portrays the sci-fi, futuristic themes within the plot much better. Either of the cover images would make me pick the book up in a book store to learn more about it. As soon as I read the blurb, I was intrigued by the pilot technology and eager to learn its positives and negatives within the book.

Put super simplistically a Pilot is a small device that is attached to the brain via a surgical procedure and this then helps the wearer/user multi task and be hyper aware of their surroundings. The pilot is marketed as enhancing what you & your brain can do. You can learn faster, notice and have a higher level of awareness of things going on around you without even appearing to be taking notice.

The relatively happy family at the centre of the book are school teacher Valerie, political assistant Julie, their son David (who is biologically Julie’s son) and Sophie who the two women adopted. Valerie first noticed a blue light flicker during a lesson in an auditorium and that’s how she discovers “pilots” and then learns about what they are. Valerie later attends a parents evening event at David’s school where his teacher explains that David is being left behind academically by his fellow students. David had always been good academically so Valerie asks his teacher to elaborate. The teacher reveals that the reason David is being left behind is that so many of the other pupils are being fitted with pilots, meaning they are learning at a much faster pace than David is able to do with his unenhanced brain.

The whole debate of whether David should get a pilot or not is talked over by his mothers, Val and Julie. Valerie is sceptical, she doesn’t like the idea of messing about with such an important organ as his brain. Val’s reasoning is that their other child Sophie, suffers from epilepsy which affects her brain and the Doctors cannot operate to fix that nor come up with the correct mixture of medication to stop her fits, so how can someone have created the pilot, as well as a safe procedure to attach it to your brain? Julie’s opinion is different, the company that makes the pilot has brought a lot of money and jobs into the area, in fact she has been secretly thinking about getting a pilot herself.

What with new employees at work as well as the old employees having pilot’s she is being left behind herself and feeling like she is becoming obsolete and continually overlooked for higher positions. Julie stays quiet about her considering a pilot for herself and reasons with Valerie that David having a pilot could be a positive thing and increase his chances of getting into a good college after school. So, Julie takes David to have a pilot fitted at the bright clinic that strangely smells of cookies and really doesn’t resemble any hospital she has ever been in. Sadly, both Julie and Val have visited many hospitals and clinics with Sophie over the years.

When David announces an Army recruiter has visited his school and he has signed up to go into a special force consisting of young people his age, fitness level who also have pilots fitted, Val and Julie are devastated. They end up respecting his decision, at his age he is classed as an adult so they can’t really do much about it. Though it doesn’t stop them both reacting in different ways. Julie arranges a meeting with an army recruiter who basically assures her that David will be an asset to the army not a pawn or foot soldier used as cannon fodder. That seems to appease Julie and her worries, she also goes ahead with having her own pilot. Val has an outburst at school with an army recruiter still bitter about what she considers as an underhand trick getting David and some of his friends to join up.

The book continues telling this families story, the way David continually struggles with what he calls the constant noise since he has had his pilot fitted. Despite reaching out to those that fitted it he is told to just continue with the games and brain exercises. In fact, David is led to believe it is him and his brain that are at fault, not the pilot. Whilst David is away in the army his younger sister becomes involved in an activist group that organises rallies and protests outside of pilot manufacturers and clinics on a regular basis. Sophie ends up being co-manager with Gabe of the local branch of activists against pilots. Sophie has sympathy for her brother saying it was peer pressure and he really had very little choice in having a pilot fitted. However, she has very little sympathy for Julie, who she said had all the facts and was old enough to say no to her pilot. Family dynamics have totally switched over as Sophie used to favour Julie, until Julie got a pilot. Sophie now increasingly favours her non pilot enhanced mother, Val. After Val’s outburst at her school with the Army recruiter she was initially suspended for just 2 weeks until things had quietened down. However, Val was never reinstated and it took a year to get another teaching job in a public school where she and a couple of other teachers without pilots teach classes to the few students with no pilots fitted. Those without pilots are soon looked down on as having something wrong with them, which naturally also affects the ability to get into a college, or to get a decent job too. Some cannot have pilots due to a medical-conditions like Sophie who has epilepsy, and others like Val just have no desire to get one, or have religious reasons. Sadly those without a pilot are quite blatantly discriminated against, even though it would be denied if someone tried to claim it was the case.

When David returns from the army, he has a job all lined up with the people who manufacture the pilots. Previously used as a “poster boy” in a campaign when he was younger and first got his pilot. It is partly because of this that David is chosen to go to schools and work places encouraging other to have pilots. Despite David still struggling with his own pilot and following all the rules and guidelines things go from bad to worse for him. He loses his job, argues with Julie and walks out of his family home. He finally discovers something at a party that helps subdue the “noise” but these pills marked with what looks like a “q” which prompts David to call them “Quiet” are not on prescription so become expensive.

Without giving too much more away, the family that used to talk about everything have turned into a family that keeps secrets from each other, storm off and slam doors. When David has an accident, Val, Julie & Sophie are all thrown together and they begin to reveal their “secrets” which end up leading to more questions about the pilots. They make a plan together to unearth the answers they need and set about revealing what they have learnt about the pilots and their manufacturers.

One of my favourite characters in the book was Milo, Davids school friend and army colleague. Milo is back to being a civilian a few months or so before David and is eager to help his long term, friend assimilate back into society. He admits to David that he found it difficult to stop watching all around him, sitting with his back to a wall, assessing every possible danger etc. Even when David has nowhere to live, he offers his friend a room in his own home that he shares with his girlfriend Katrina. Despite Katrina nagging Milo about David over staying his welcome, he sticks up for his friend and pleads Davids case to her explaining what it’s like coming out of the army.

My immediate thoughts upon finishing this book were a brilliant read, certainly makes you think a lot about procedures and medications in our current world. You look at the pilot from each point of view, positive, negative & indifferent! It honestly has you questioning yourself as to whether you would have had a pilot fitted, if yes why? And of course, if not why?

To sum up I really enjoyed reading this book a lot. It made me really think about the technology featured in the book. It reminded me a little of The Passengers with futuristic technology that has been rushed out with any possible issues overlooked in the eagerness of a big company wanting to sell it to people and make money. Then when it all starts to go wrong the big company tries to hide the evidence of these flaws and continue on regardless. In this book it takes a group of people consisting of a majority of those without the technology to uncover the lies, and with the help of a reporter and others that have had issues with the pilot really uncover what has been going on. The book certainly keeps you on the edge of your seat wondering what will happen next. The book also has you pondering what you would do in the individual circumstances in the different characters positions. Who do you consider right? Or wrong? Could David’s accident have been avoided? The book leaves you thinking about so many issues, and to be honest the way modern technology is changing so rapidly it isn’t that unbelievable! I also found the changing family dynamics an interesting part of the story too. Could a lot of the misunderstandings have been avoided if they had all sat down and discussed what was going on in their respective lives? Definitely a thought provoking read!

And just in case you'd like to look at
the other cover here it is! 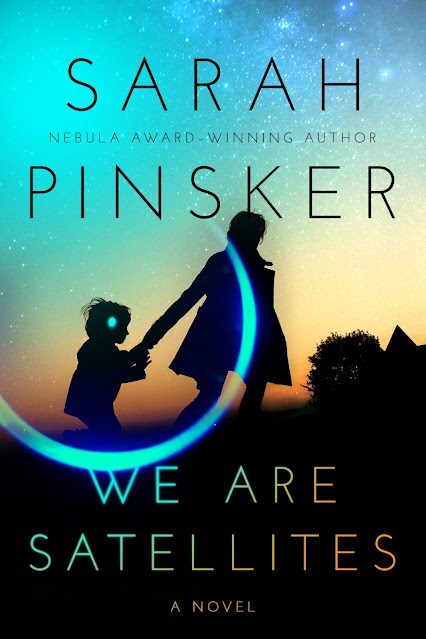