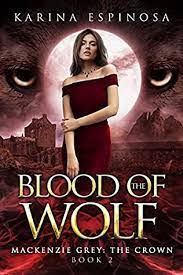 BLURB from Goodreads
Blood is thicker than water.

With the bombshell that Ophelia dropped on the night of the mating ceremony, Mackenzie is struggling with her inner self. Everything she once believed her life would be, just got turned upside down—and not by choice.

Fae magic runs through her blood and the consequences are dire. The demon wants what Mackenzie has because of her blood and will stop at nothing until he gets it … even if he has to kill her in the process. But the question is, why does he want it so badly? And why is he killing so many innocent lycan in his quest?

To get these answers, Mackenzie will ally herself with those who once were her enemy. But she’s making a dangerous choice, because at any moment, they’re right on the sidelines ready to stab her in the back.

Her blood is the key. Can Kenz survive a battle against Abaddon? Or will the ones closest to her be the ones to take her down?

REVIEW
Once again, this cover is eye-catching, with the central focus being of the strong looking female, Mackenzie Grey. The cover also fits well with the rest of the covers of all the other books in the Mackenzie Grey Universe. I still can’t believe that this is the penultimate book!

The book picks up where Queen of the Lycan’s left off with Mackenzie faces different problems from various sources. The worst and the one she comes to fear the most in this book is the one that comes from Abaddon. He wants something very precious from Mackenzie that both she and her true mate, Bash will fight for until their respective deaths. He demands a meeting with Mackenzie on the day of the full moon, which presents more than one issue, firstly neither Bash, nor Alexander want her to agree to meeting the demon without having back up with her. There is also the issue of it being her first full moon since becoming pregnant, meaning she cannot shift as she would normally and the other problem of not knowing how his full moon will affect her. Dr Harris has warned her that the full moon will affect how she is feeling, it will drain her energy even more than her pregnancy is doing at the moment or it has been known to increase her energy. Of course, Mackenzie isn’t going to let the “problem” of the full moon stop her from meeting with a dangerous demon that has threatened her people in Sheunta Village is she doesn’t meet him.

Despite repeatedly promising to take things easier problems and duties arise that only Mackenzie can take care of. From Summit meetings and the constant pressure from the Alpha’s including Charles, to meetings with her own newly formed council and starting to make some of the improvements she wants in her own race of Lycans as well as changes in how the different paranormal beings work together.

Characters I continued to love were Ranulph, who is continually full of bluster and irritated by the way Mackenzie goes headlong into the eye of any brewing storm or problem, yet at the same time you can clearly see he loves her as if she were his own daughter.
Bobby Wu seems to have come full circle, initially being someone who helped Mackenzie, to the someone who was using her for his own gain, to then possibly being the one person who can maybe help to solve a rather large problem for her. It remains to be seen if his dabbling in dark magic can help save both her and her child.

I also continue to love the dynamic between Mackenzie and Bash, at first at odds about her pregnancy. Bash thinks Mackenzie doesn’t want their child, but then they both come around to doing anything and everything to protect their rather unique child against a dangerous demon. They even agree on accepting help from previous enemies Fenrir and his loyal Valkyrie friend Raven, though they may not fully trust them. In fact, Fenrir seems quite offended when it comes up how trustworthy he would be around their child. I also adored the fact Kenzie & Bash wouldn’t agree on the sex of their child. Mackenzie is convinced she is having a boy, who will be exactly like Bash with the exception of the grey/silver eyes of his mother. Whereas Bash, is convinced that the baby is a girl and is just like her mum. They actually joke about the possibility of Mackenzie having twins! But Dr Harris says he can only see one child and it is too early to say whether it is a boy or girl.

Another character I grew even more fond of in this book is Raven, the Valkyrie. Raven guesses Mackenzie’s secret but does not reveal it to Fenrir, instead she encourages Mackenzie to reveal that she is pregnant herself. As Mackenzie cannot shift whilst pregnant, she’s rather stuck for getting around, as even walking tires her, so Raven kind of acts as her transport on more than one occasion.

Of course, when you love characters in a book, there are usually some characters that you “love to hate” and that label firmly fits Charles, (Jonas & Jackson’s Alpha father). He is always making snide remarks to her and about her at Summit meetings. He seems to be plotting and planning to take Mackenzie any which way he can, in fact it is something that is accidentally overhead that gives her a very tiny advantage when she is basically trapped alone with him in a one-on-one fight where she cannot fully shift. Mackenzie faces the awful realisation that Charles wasn’t acting alone. I was quite shocked about how far Charles was prepared to go to try and get rid of Mackenzie, I mean I knew he didn't like Mackenzie.....but to go that far! It will be Mackenzie’s turn to try and hold Bash back when he comes across the Alpha who attacked his mate!" As ever Mackenzie attacks the problem head on by calling a Summit meeting and explaining what will happen to him and anyone found to be helping him. I don’t know why but I still get that kind of off feeling about Dr Harris…..I guess I’ll find out in the next book whether he is trustworthy or actually is what he claims to be.
I almost forgot about the Summit Alpha’s plotting to try to get Ollie, Mackenzie’s brother, transferred to the rather infamous Toronto pack that treat Mackenzie so badly. If she refuses the request, the summit will accuse her of “playing favourites” and use it against her. However, after Bash talking to Jackson they may have found a loophole, though it’s not one Mackenzie likes the sound of at the moment it’s all they have, and she has even bigger problems to deal with first.

I enjoyed how Mackenzie’s relationship with her most trusted guards, William and Liam developed too. Then there are all the preparations that Mackenzie has set in motion to achieve her plans for the future. Mackenzie is certainly putting her full trust in her council, especially her Luna council members. I could go on and on about this book!

My immediate thoughts upon finishing this book were Wow! What a place to end!! It all seems rather bleak and dark for the future of Mackenzie & her yet unborn child with so many enemies wanting them both. Though I can't help holding on to the sliver of hope that Mackenzie has a lot of incredibly talented & strong people ready to fight for her and alongside her.

Summing up poor Mackenzie doesn’t have a minute to herself in this book, in fact there’s a joke/remark in the book between her & Bash about needing to book out “together time.” She seems to be getting problems and dangers thrown at her from every angle. Though thankfully she has her old friends to help her with the issues, from Jackson looking into the protocol, paperwork and possible loopholes to pack transfer requests. Then old friend Lucian, the one to talk tough to her when she arrives at his cottage in a panic about being pregnant, and also the one prepared to face off a demon to help her too.

I can’t wait to read the next book, even though it’s a shame it’s the last book in this series. I am looking forward to how Karina Espinosa wraps up all the loose ends as well as how Mackenzie solves all the issues and problems going on around her. How on earth is all the pending action and loose threads here and there going to be tied up and settled? . . . I can’t wait to find out!!