WISHLIST WEDNESDAY - THREADNEEDLE - THE LANGUAGE OF MAGIC BY CARI THOMAS

This weeks Wishlist Wednesday is
Threadneedle by Cari Thomas
and has been stated as being the most anticipated
debut fantasy release of the year! 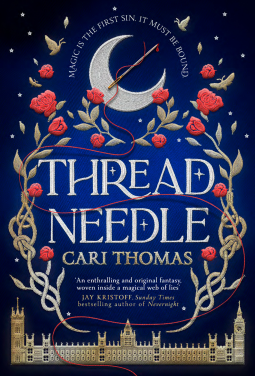 BLURB from Goodreads
Within the boroughs of London, nestled among its streets, hides another city, filled with magic.
Magic is the first sin. It must be bound.

Ever since Anna can remember, her aunt has warned her of the dangers of magic. She has taught her to fear how it twists and knots and turns into something dark and deadly.

It was, after all, magic that killed her parents and left her in her aunt’s care. It’s why she has been protected from the magical world and, in one year’s time, what little magic she has will be bound. She will join her aunt alongside the other Binders who believe magic is a sin not to be used, but denied. Only one more year and she will be free of the curse of magic, her aunt’s teachings and the disappointment of the little she is capable of.

Nothing – and no one – could change her mind before then. Could it?