REVIEW - COME FLY THE WORLD: THE JET-AGE STORY OF WOMEN OF PAN AM BY JULIA COOKE 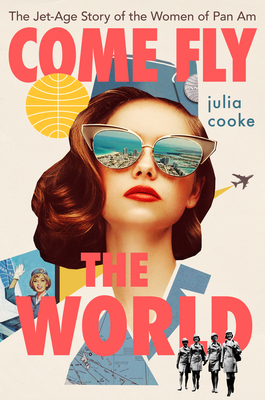 BLURB from Goodreads
Glamour, danger, liberation: in a Mad Men–era of commercial flight, Pan Am World Airways attracted the kind of young woman who wanted out, and wanted up

Required to have a college education, speak two languages, and possess the political savvy of a Foreign Service officer, a jet-age stewardess serving on iconic Pan Am between 1966 and 1975 also had to be between 5′3" and 5′9", between 105 and 140 pounds, and under 26 years of age at the time of hire.Cooke’s intimate storytelling weaves together the real-life stories of a memorable cast of characters, from small-town girl Lynne Totten, a science major who decided life in a lab was not for her, to Hazel Bowie, one of the relatively few Black stewardesses of the era, as they embraced the liberation of their new jet-set life. Cooke brings to light the story of Pan Am stewardesses’ role in the Vietnam War, as the airline added runs from Saigon to Hong Kong for planeloads of weary young soldiers straight from the battlefields, who were off for five days of R&R, and then flown back to war. Finally, with Operation Babylift—the dramatic evacuation of 2,000 children during the fall of Saigon—the book’s special cast of stewardesses unites to play an extraordinary role on the world stage.

REVIEW
I love the cover! It has a really glam, yet retro look to it. It brings to mind all the great things you associate with air hostesses. This cover certainly attracts your eye to it and encouraged me to think that the book would be from the point of view or at least solely about air hostesses.

The book does follow a few women, Karen, Lynne and Tori being the ones that stay in my mind. All these women have to fit/fill certain expectations such as weight and looks which would most likely be frowned upon, in the era we live in now.

The uniforms, rules and expectations varied slightly depending on which Airline the women worked for. Though this book is centred more on the Pan Am Air Hostesses it does reference other airlines too. Pan Am ran “grooming classes” which one of the ladies featured in this book called Karen wrote home about to her mum saying the course would cost £500!! Karen also revealed to her mum in the same letter that she had never known that blue eyeshadow de-emphasized her blue eyes — she should choose a greenish hue — or that a hint of a bright white below the eyebrows would highlight the arch. One of the grooming supervisor’s had reshaped her eyebrows, and they now looked so much better. In 1969 the spring trainees were the very first ones to be allowed to keep their hair long but it was on the condition they should keep it clipped neatly at the nape of their neck. This new freedom didn’t bother Karen as she had her hair cut into a bob, the same style she has worn it in during her time working for the US Army.

The women were also given four pages of “packing tips” which contained gems like building a core wardrobe in drip dry fabrics as they are easier to manage and do not need a lot of extra work ironing. The tips also contained a note on wearing comfortable shoes!

The Pan Am Stewardess manual gave advice on things like lip shape, lipstick/make-up application, correct posture, skin care, and haircuts. It says in the book that these grooming lessons took nearly as much time as the first aid training!
For makeup, a natural look with red, rose red or coral for lips and nails. Pan Am wanted their hostesses to look pretty, feminine and sophisticated. They employed people to ensure the stewardesses were meeting their specific guideline. If a stewardess wanted to change her hair, she needed to have permission from the airline. Stewardesses were expected to have clear skin, be between 5’3 and 5’9, and be willing to follow the rules. The stewardess skirt had to be exactly one inch below the knee, so it doesn’t raise and be too revealing when the stewardesses were reaching over head lockers and doing their jobs on the plane.

The book also covered difficult journeys the Air Stewardesses had to cope with such as transporting young men from America over to fight the Vietnam war. Also, the evacuation effort made and how integral the Air Stewardess’ willingness and professionalism to come up with solutions as quickly and efficiently as possible. The conditions these air hostesses had to cope with in the air whilst helping ill, scared children was awful. I should imagine if this occurred in the present day the Air Stewardesses would be treat for a form of PTSD. Not in those days though they were expected to pick themselves up, put a fresh smile on their face and continue on.

The book also covers some Airline history and also the many lawsuits for women’s rights, for job progression etc, and men’s rights to become Air Stewards, sexism, racism etc. Some of the articles covered were ones that I honestly wouldn’t of necessarily thought of. I guess in the present day we take a lot for granted, as being our rights to have/do.

I’ll totally admit I really enjoyed all the Air Stewardess grooming and training details, it would have been great to have some photographs or illustrations too. I even found the military filled flights fascinating to read about, and the evacuation of orphans though harrowing it was something I wouldn’t necessarily of thought of the Air Stewardesses having to do. Some of the Airline history in places felt a tad long winded and I could feel myself losing interest, but luckily the different chapters are kind of mixed up a little with the more serious history, regulations interspersed with anecdotes from actual Air Stewardesses.

My immediate thoughts upon finishing the book were quite mixed, though I found parts of the book really interesting others seemed to drag on in minute detail on things I didn’t find particularly noteworthy.

To sum up I really enjoyed some parts of the book yet felt some parts were somewhat drawn out in my opinion. It wasn’t exactly what I was expecting . . . but it was still an okay, fairly interesting read.