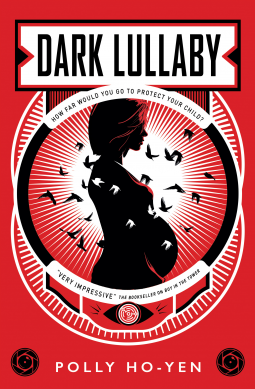 BLURB from Goodreads
In Dark Lullaby a mother desperately tries to keep her family together in a society where parenting standards are strictly monitored.

When Kit decides to have a child, she thinks she's prepared. She knows how demanding Induction is. She's seen children Extracted. But in a society where parenting is strictly monitored under the watchful gaze of OSIP (The Office of Standards in Parenting), she is forced to ask herself how far she will go to keep her family together.

REVIEW
I think the cover of this book really does it job well! It certainly attracts your eye, demanding your attention. The main focus on the cover is the silhouette figure of a quite heavily pregnant female figure. There are what appears to be birds flying around the woman, upon reading the book at first, I wondered if these birds represented the sphere’s, but then I saw the eye-shape image further down the cover that I reckon is a sphere. So, I reckon the birds could represent that there are eyes everywhere always watching, ready to swoop down and deliver the dreaded ISP notices. I’ll be really interested to learn what other readers think they are too. Every time I look at this book cover, I notice something else! Oh! and I cannot forget the by-line, “How Far Would You Go To Protect Your Child?” My immediate thoughts were, I would do anything, and everything, to protect my child, and still would!

So back to the by-line, “How Far Would You Go To Protect Your Child?” after having read the book. I once again asked myself the same question both from my own point of view and then from the point of view of the characters of Evie and Kit who both have to make this decision in the book after discovering some quite valuable knowledge to use as leverage for their own selves and family, I also thought about the other characters who did not have this knowledge/leverage at their disposal. After agonising from all sides of the “argument” I had to say the same answer and agree with both Evie and Kit’s decision, though I would have thought Evie would have confided and/or shared this valuable information with her sister Kit earlier. However, Evie never really tells her sister she more points her in the direction of the knowledge and its up to Kit to joint all the clues, and sort out her life going forward.

The genres listed for this book are Thriller, Mystery, Sci-fi and Fantasy which I totally agree with but I would also add futuristic because who knows where our present real-life society to lead! Also, I would place this book in the dystopian genre, in fact it has been compared to great dystopian The Handmaids Tale by Margaret Attwood, which I have to agree to feeling there were some similarities (though in the interest of being totally honest I have not read the books. I watch the series and do have the books to read!).

I guess I should now try to describe a little bit about the back without revealing anything too “spoilery”. I would say the book is set in a futuristic dystopian world where infertility is extreme high. Couples really struggle to have babies. Over time more and more regulations and laws have been put in to improve a couple’s chance of conceiving and having a healthy baby. Some people who do not wish to go through the sometimes, gruelling treatments to become pregnant opt out, and are in fact called “outs”. Though there are not official punishments for not having a bay, those that choose to have children earn more housing credits, they can earn more. Basically, those in power are doing their utmost to make induction and pregnancy as desirable as possible and those who refuse induction are not openly punished yet live in poorer quality houses & have lower wages. They get to a certain level in their job where they cannot progress any further, or earn any more money. They are stuck at the same level for the rest of their life unless they then choose to have children.

When going through the Induction the woman has to take a cocktail of drugs to improve her own bodily hormones to achieve the perfect balance for an optimum pregnancy. This does take a toll of the woman both physically, mentally and emotionally. The couple also needs to read up on everything they are going through and attend meetings where all sorts of different scenarios are talked about and they are judged by not only official but by their peers too. Once the couple becoming pregnant and have their baby home the pressure cooker atmosphere continues their lives are under a microscope always being watched for anything that doesn't meet the office of standards of parenting. Eyes are always watching, ready to report any mishap or incident. Parents live in constant fear of not meeting the required standard and having their precious baby removed from them. Throughout the time period covered in the book, the amount of IPS notices couples are allowed to incur changes, but there is always a certain set amount, cut off. Should you exceed that amount your child is taken away. Your child is taken to a communal type home where they are given the best of everything and cared for and brought up as those in power determine they should be. IPS (Insufficient Parenting Standard) notices can be given for numerous, ever changing breaches.

The two central female characters in the book are Evie and Kit. They have both been brought up mainly by their father and are among the last children to be born via natural means. Their mother and younger sibling both died. Kit was too young to really remember much about her mum or sister, thought older sister Evie does share the occasional memory about them. The sisters are very close to each other at the beginning of the book though that doesn’t mean that they agree about having children. Evie is wholeheartedly for going through induction, believing all the hype about needing to breast feed only being best for the baby, until her own baby is not gaining enough weight. Evie risks receiving an IPS for Jakob not gaining enough weight so she secretly obtains “illegal” formula milk which she ends up being discovered meaning she gets an IPS anyway. Kit tries to help her sister as much as she can but with Evie determined to stick to being the best parent ever, she cuts her sister off, not allowing her to hold Jakob for fear of Kit not holding the baby correctly and incurring more IPS notices.

It's at Jakob’s naming ceremony that Kit’s future changes when she meets a work mate of Seb’s called Thomas. It’s not so long until they start dating and though they begin with agreeing on not wanting children, soon their resolve starts to be chipped away at. It's not long until Kit has begun the process of having a baby and becomes obsessed about the "right" things to be doing as her sister was before her.

The book tells the stories of both sister’s families. Evie & Seb who sadly receive so many IPS notices their relationship doesn’t survive and their precious son is removed from their care. Then suddenly Evie moves to a nicer home and is given her son back. Evie is so won over to the work of the government that she talks about becoming an enforcer herself. When Kit and Thomas face the increasing possibility of having their cherished daughter Mimi away because of receiving IPS notices too often they plan to run away, with the help of a local undercover resistance group, but this still means being separated from Mimi for a length of time that Kit cannot cope with. When she gets an urge to go to her daughter, to retrieve her from those hiding her runs away from her husband Thomas scared he will not agree with her actions. When there is no where else to turn, Kit puts what is left of her faith in their bond to the test and approaches her sister for help, but what is Evie hiding, why does she live so far away from everyone else alone with Jakob? Why does she seem so standoffish with her own sister? Finally, just as Kit is about to give up, Evie offers Kit her own car to take Mimi to hospital and an address of someone who may be able to help Kit, but why should Kit trust her now?

I felt really drawn in and hooked into this book and truthfully hated having to put it down. I had so many questions and thoughts whilst reading the book How can the new parents ever fulfil the extremely, ever complicated regulations for bringing up their child correctly? Is Induction just an elaborate breeding program? Where the child is removed from the parents is it always the answer for the child’s best interest for them to be placed into the ideal compound environment? What are the children told about their parents? Do parents/children ever get to see one another again?

There are so many twists, turns and different levels to this book and its society. The disturbing thing is that the society is not all that unbelievable! I think the fact that I could read this book and be convinced that this type of thing could actually happen made it all the more of a gripping, enthralling, unputdownable book! I honestly pitied both sisters, but more so Kit, which is quite strange when at the end of the book she is an enforcer. One of those that hide in cars with tinted windows, turn up at homes all times of day or night that at times seem to great delight in handing out Insufficient Parenting Standard notices. I truly went through a wide range of emotions reading this book. There were moments of joy, poignancy and great warm feeling family scenes too amidst the horror, disbelief, sorrow, pity and desperation for those who had their children removed from them. I also felt shock and disgust when the secrets and truths behind all the child removals was revealed. I thought that those in power may have been helping the infertility issues but they also created a horrible society where people are continually under surveillance and pressure. It is such a pressurised situation that it comes between husband & wife as well as coming between two sisters, where one sister is scared to help the other and her baby for the fear of her own child being taken from her! A society that is supposedly geared to building families, yet whilst helping make additions to couples and building new families, if the rules are not met to a sufficient standard these families are cruelly ripped apart.

This book is definitely up on my best reads list! I would compare Dark Lullaby to Maternal Instinct and Stealing Time both by Rebecca Bowyer which I have read, adored and highly recommend, along with The Farm by Joanne Ramos, VOX and Q both by Christina Dalcher.

To sum up, I found the society both interesting and intriguing. How the book ends it all makes sense as a standalone book. Having said that I would love more! Maybe one or both sisters and their husbands could become part of a resistance movement against those in charge? I will most certainly be looking out for other books by this author!