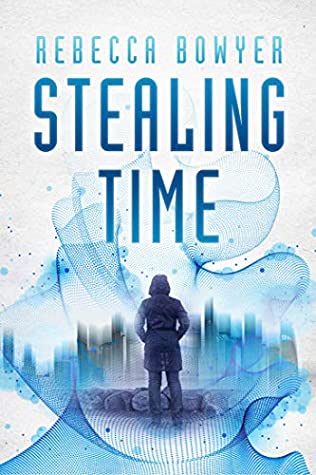 BLURB from Goodreads
They’ll kill to get more time. She’ll die to stop them.

In a world where each person’s life span is limited by law, time is a lucrative commodity that some people will do anything to get more of.

Fourth-dimension physicist, Dr Varya Galanos, invented the technology that time thieves used to murder children by stealing their remaining years of life. Although it was destroyed 10 years ago, and the thieves brought to justice, she still suffers from the burden of guilt.

Masquerading as a lowly lab technician at the Minor Miracles Foundation, Varya finds a certain peace searching for cures for rare childhood diseases, like the one which took her 4-year-old son, Kir, away from her.

The Foundation is secretly funded by Varya and her employee and confidante, Marisa Volkov, by selling illicit time tabs to wealthy patrons. When dissolved on the tongue, a single time tab grants a person four extra hours in their day.

The time tab technology is highly valued – and highly illegal - in a society where Time Chips are inserted into each child’s brain stem at birth. Lives are limited to just sixty-five years to conserve the planet’s ever-dwindling resources.

Varya’s tenuous peace is shattered when children start disappearing again. She fears the worst - that the time thieves have returned and have somehow resurrected the technology to steal precious years from children.

Varya is the only one who can find a way to reverse the time drains and save the returned children. But doing so could cost the lives of those she holds dearest.

When her best friend’s son becomes a victim, returned with just hours to live, she is faced with an impossible choice.

REVIEW
The cover drew my eye to this book first, then I saw the authors name Rebecca Bowyer and as I had read and loved her previous book /Maternal Instinct I immediately gave it a closer look. I do really like the cover, the mysterious hooded figure at the centre of the cover and the smoky effect maybe representing time. Once you read the book, the cover makes even more sense.
This book is set in a future where women are allowed to have just one child, in an effort to control the growing population and preserve natural resources. Everyone has a chip inserted into their neck which allows them a maximum of 65 years of life. Once your 65 years expires you literally die. However, you have to earn your years by staying out of trouble, conforming to the one child policy. No chip has ever successfully been removed without that person dying.

The technology in the world within this book is so advanced, cars that drive themselves, cryogenics so those wealthy enough could be frozen in time and perhaps brought back to life sometime in the future. Naturally this makes “Time” a precious, highly desirable commodity. When things are in such demand those that can afford it will pay a great deal for “time chips” which in turn creates a black market.

The desirability of “extra time” created people referred to as “Time Thieves” who kidnapped children and removed their “Time” and sell it to others. One of the main characters Dr Varya Galanos was part of the company that created the technology that allowed the “Time Thieves” to remove time for the children they kidnapped. The technology was of course, destroyed to prevent such a thing ever happening again.

Varya’s own son was terminally ill with a rare disease that didn’t have enough research funding to help him in any way. Varya creates her own research centre called Minor Miracles, where she researches rare diseases. To fund her research Varya supplies short time tabs to Marissa, a woman she has befriended. Marissa goes to the wealthier peoples’ homes, the money they pay as a “donation” to the Minor Miracles foundation. It’s not only the rich that have a need for extra time tabs, as the poorer, single mums, would love them to either get extra sleep or to spend extra time with their children.

When it appears that someone has re-invented the necessary technology to steal time directly from children again, and are kidnapping them, removing their time, and then returning them to their parents with hours left to live, it really bothers Dr Varya, especially when her friend Zoe’s son, Daniel is one of the kidnapped children she knows she has to do something and very quickly. However, doing this will involve revealing a very large secret about her own son and mother as well as asking her ex-husband for help, which she really doesn’t want to do. I can’t go much further in describing the plot as I feel it would reveal too much and impede the slow unfurling of the book when you read it yourself.

My favourite character in this book would have to be Marissa, she wasn’t overly wealthy despite selling the Time Tabs to Dr Varya’s wealthy clients. Marissa selling the tabs enables Varya to continue investing into rare disease research and treatment. As part of her “payment” Marissa takes a certain amount of time tabs every month to a domestic violence shelter, which gives the women extra time to spend helping their children with school work, or just “spare time” to spend with them. Which I think redeems her character as someone was always going to be selling time tabs to the rich but she does still try to help others who are not so well off.

This book is certainly thought provoking, among the questions I felt this book raised were, such as, how far would/could/should a mother be prepared to go for their child? What would you do to help your child? Anything? At the expense of others?
Can giving to the less fortunate for free whilst making the rich pay for the same thing, balance out the scales of right and wrong? What amount of 'doing right' does it take to cancel out the 'wrong doing'?

Though I had read another book by this author, I honestly didn’t think that Stealing Time could be as good as Maternal Instinct but by the end of it I felt it was even better! I will certainly be keeping an eye out for Rebecca’s next book!

My immediate thoughts upon finishing the book were that it was an amazingly thought- provoking book.

To sum up this book is brilliantly written, has lots of twists, turns, surprises, and a perfect ending!