REVIEW - QUEEN OF THE LYCAN - MACKENZIE GREY: THE CROWN BY KARINA ESPINOSA 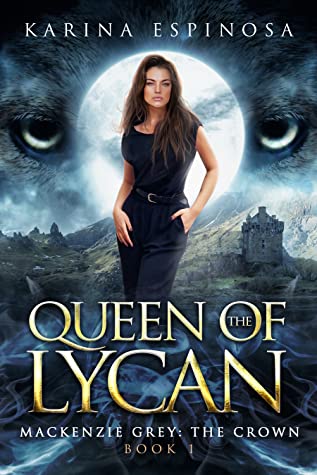 BLURB from Goodreads
Long live the Queen … so they say.

With my arrival to Scotland and my coronation right around the corner, I’d never been more nervous than I am now. Known for having enemies, I didn’t realize becoming Queen would garner even more. I’m not the only one after the throne and the battle for the crown might cost me my life.

The Summits on one side and the Council on the other, it’s a fight to stay on top and protect the lunas from a man’s world. But I’ve never been one to back down, especially when it comes to the lunas. The Summits and Council are in for a rude awakening when I shake things up and turn their worlds upside down.

On top of all that, there’s an evil lurking in the forest and it’s after one thing—me. With my mating ceremony coming up, I don’t know how I’m going to survive it all.

The goal is the crown, but can I keep it?

REVIEW
First of all, I must say I totally adore this book cover! Mackenzie is front and centre on the cover, looking like she is not taking any hassle from anyone! The castle in the background is a clue that yes, this book is set in Scotland. I love the eyes of the wolf on the cover too.

Honestly these books get harder and harder to review without giving away any spoilers! So, this review may be a little shorter and less detailed than normal. In this book Mackenzie is busy preparing for her coronation as Queen of the Lycan, taking over from her biological father Alexander. Rightly so, security is tight in Sheunta Village, with the imminent threat from Fenrir who wants the throne for himself. After the coronation Mackenzie and Bash have their wedding and mating ceremony. If those two things aren’t enough to occupy Mackenzie, she has the stubborn, set in their ways, Kings Council to deal with, along with the European and American Summits too. None of the three groups are particularly happy that Mackenzie is to become Queen and all seem to be plotting her demise with the hopes of stealing her crown too!

One of the Council members, a stuffy old, cantankerous man called Jacob makes the mistake of challenging Mackenzie to fighting his grandson, William. Which, I know this won’t be a spoiler to anyone, as we all know Kenz doesn’t shy away from a challenge, especially if involves a fight! It soon becomes apparent that no matter how Kenz approaches the Council she has inherited from Alexander will work, be it attempts to place nice, to compromise or even threaten. Mackenzie of course ends up handling the problem council in her own direct, no nonsense way. When Mackenzie allows one of the council’s decisions over security, and is later her opinion is proved as being the right one, she knows she has to stand her ground, go with her own gut and either make or add some of her own allies to this rather old fashioned council. However, when Mackenzie’s meeting with the American and European Summits goes in a similar direction to her Queens council meeting, she cannot act as rashly and has to be satisfied with holding her ground and organising another meeting. Charles Cadwell of course makes his thoughts on Kenz fairly clear for everyone to see, not that it bothers Kenz one bit. Wow I so hope she gets to wipe his snide little smile off his face at some point in the future. In fact, I would quite like seeing him begging her forgiveness, or thanking her for somehow rescuing him!! He definitely needs a visit from karma, with Mackenzie around to watch.

Both Bash and Alexander try their best to be there for Mackenzie but she is and I would say, is always going to do things her own way. I enjoyed reading about the interviews of Queens Council candidates. Kenz isn’t afraid to stir the pot, with one candidate being related to a rather chauvinistic current member of the council. Of course, there’s more than one female candidate as well as different species!! I can’t wait for the reactions of the Summits and older Alpha’s who Kenz will be dragging kicking and screaming into a more modern future. As if that isn’t enough to contend with, someone is after something Mackenzie has and she is being kept in the dark about the identity of her future attacker by Fenrir.

So much happens in this book it has loads of twists, turns, little clues to different things going on. This plot branches out in so many directions. Mackenzie has to get through her coronation as Queen, endure the powerful pass over of ruling Alpha power from her biological father, Alexander to herself. Mackenzie would never have categorised herself as weak but this power exchange gives her the extra power needed to roar and put other alphas in their place if necessary. Mackenzie has to meet and deal with what was the “Kings Council” that she inherits, and it sure needs some tweaking to become the “Queens Council”. Mackenzie has to deal with the sly Summits who are working in the background against her whilst they smile to her face. Then there’s a new threat tracking Mackenzie which isn’t afraid to kill anything that crosses its path in its efforts to get to her. Finally, she has a “good” thing to look forward to, her mating ceremony to Bash. That is one thing Mackenzie is totally sure of, the love, and the support and a happy future with Bash, though she does feel a little wobble during the mating ceremony when she has her “mating vision”.

In this book we see Mackenzie reunited with some of the characters from the previous books, such as Ailios the leader of the Highlanders, and Ophelia the Oracle. I love the interactions between Ranulf and Makenzie, they run through so many emotions, such as their usual verbal sparring, yet there’s a lot of mutual affection shown in this book. I was super excited to discover that Lucian is featured in this book, his relationship with Mackenzie as strong as ever. I have a feeling he could end up being key to a certain battle she has looming ahead of her.

There are quite a few new characters in the book too, well one of the characters is new to this book but has appeared in their own (no spoilers here!!) and the other is Dr Daniel Harris who has a new modern clinic in Sheunta Village. I’ll be totally honest I can’t say why but I just don’t like him! I do like one of the other new characters called, Junior Khumalo, the Alpha of the Johannesburg pack who is blatantly ignored by both the members of the American and European Summits.

Another thing I really both appreciated and relished the addition of some more Lunas around Mackenzie. I should confess to having something in my eye as I read how a certain look in the eyes of Maria Fernanda Sandoval from the Barcelona Pack in Spain that reminded Mackenzie of Blu. A female Luna character I totally adored from earlier in the Mackenzie Grey Universe. Then of course there’s the petite Luna, Rowan who has applied numerous times for a position as a guard. Mackenzie knows she cannot improve the world she is living in, or face her latest threat to her life without the help of friends old and new being around her and helping her. I think Mackenzie will always stick up for herself, never ask anyone to do something she herself wouldn’t do but she does seem to be maturing in this book, and accepting the help from those around her.

A couple of things happened/were revealed in this book that I had hoped would happen for a while. As one character has kind of migrated from one of Karina’s other series, I am hoping a few more characters could cross over too. I’d love to see the feisty women from her different worlds meet up! Maybe they will, maybe they will be the key to defeating the looming harm Kenz finds herself facing in this series.

My immediate thoughts upon finishing this book and my summing up are both the same sentiment which is Wow! What can I say? Amazing! When a book delivers all you wanted and more, what else can you ask for? I honestly can’t wait for more!!!