REVIEW - EDGE OF SURVIVAL - EDGE OF COLLAPSE BY KYLA STONE 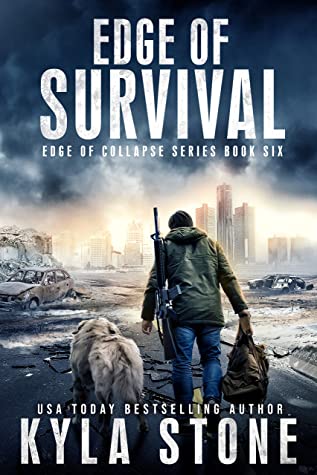 Three months after an EMP attack destroys the U.S. power grid, starvation, disease, and the brutal cold have killed millions. With the end of winter finally in sight, the town of Fall Creek, Michigan balances on the precipice of collapse.

They have suffered and sacrificed. But to forge a future worth living, they will have to face the darkness within themselves. Each must decide--will they retain their humanity or choose survival at any cost?

Preorder the riveting sixth installment in the Edge of Collapse survival series now!

When the country goes dark, ordinary people find themselves facing the end of the world as they know it. With society collapsing before their eyes, they'll have to risk everything to protect their home and the people they love.
Goodreads Link
PURCHASE LINKS
Amazon US
Amazon UK
REVIEW
I love the cover of the book as with all the other book covers this one reflects the damage and destruction that has been done to the surrounding buildings. I’d say the person on the cover is Liam and of course the huge white dog is Ghost.

When the book begins Liam is not in Fall Creek, he is travelling, alone, to find his sister-in-law Jessa’s parents, Mr & Mrs Brooks and the nephew he delivered both into the world and then into their arms. It soon becomes apparent that the Amish community that the Brooks travelled to is no longer their home. Unfortunately, the Amish area has been taken over by rogues who have also overrun and taken the nearest FEMA compound by force too. Liam is feeling torn, he feels he must check that his nephew is safe, he owes that to his brother Lincoln and his sister-in-law Jessa. Liam also feels like he should be in Fall Creek protecting Hannah, Milo & baby Charlotte. That is one of the reasons Liam is carrying out this search alone, he feels better knowing that Ghost is around to add extra protection along with the other Fall Creek residents he has helped to train to guard and protect each other.
Liam luckily meets an elderly man who appears to be painting graffiti on homes. It turns out the elderly man has a really good reason for doing this. It is to make his home blend in with the other destroyed, and damaged homes. It is this elderly man that Liam talks to and finds out about where everyone has disappeared to the now rogue controlled FEMA compound. This rogue element are well organised tough guys who call themselves the Syndicate. Liam offers to collect this man who has helped him with information on his way back to Fall Creek but the man seems somewhat resigned to his fate of staying alone and dying in his own home surrounded by his memories and photographs of his family.

Back in Fall Creek, Molly and Hannah are still heavily invested in trying to arrange the trading day. It’s whilst at the old camp ground where the bartering event is happening that Milo wanders off and ends up surrounded by feral dogs. Luckily for Milo, Quinn and Ghost come to his rescue. Sadly, this sets a chain of events that see’s Quinn meeting the leader of the Death To The Power gang who are destroying everything from what they consider the old world. Apparently, they believe it is the power that corrupted the world and anything left repairable should be broken, they believe that there are no rules, no one owns anything. If anyone tries to stop them, they are dealt with swiftly and violently. The leader of this gang, Xander Thorne seems very taken and interested in Ghost. In fact, Xander is eager for Quinn to join them, bringing Ghost with her too. He even tells her where they will be if she should change her mind. Quinn has no intention of going any where near these strange teenagers who seem like some strange kind of anti-technology cult until she sees an older man hanging further back in the group that she has a large score to settle with. Later after talking to Liam about doing some training with her and Liam finally agreeing Quinn trains hard and begins to plan her revenge. Things work out quite easy to arrange for Quinn as she has been hanging around with a couple of other teens rather than with Milo lately, so all she needs to do is tell her Gran, Molly that she is hunting over the weekend and staying with Jonas, and Whitney. Unfortunately for Quinn, things go bad for her fairly quickly and she ends up having to make a difficult choice about joining and trusting the last person she should trust or want to help to get out of a deathly situation. Luckily for her, Jonas, her alibi has accidentally given away her lie by turning up at her Grans house looking for her. Which means Liam, though not fully recovered from rescuing his nephew has to set off to rescue Quinn. The whole “finding help in the unlikeliest places” scenario happens a couple of times in this book. Some of the lines of who is good and who is bad become blurred for a while, although the bad guys usually return to their bad behaviour sooner rather than later.

In this book we find out who Rosamond has satellite phone contact with and they are also of the mentality that the ones with the largest army and brute force deserve to rule the world as it now stands. This man, known as the General has his own axe to grind and is soon plotting revenge for the death of Rosamond too. Fall Creek may be about to face its worst hostile fault so far.

This book is seriously packed full of action. Poor Liam doesn’t get a minute to rest or recuperate in this book. The relationship between Liam and Hannah is certainly becoming deeper, though what happened to Hannah at the hands of Pike is holding her back from letting Liam in, or admitting her true feelings for him, despite others around them seeing the situation and the love between them clearly. It also seems that poor Fall Creek solves one problem just in time for another to rear its ugly head. The trading day doesn’t go as well as they had hoped. Those surrounding communities that the militia pillaged are blaming the residents of Fall Creek, saying they must have known what was going on. Things are still very tense, and the fact that the Death To The Power gang are wrecking farms and buildings, along with killing livestock isn’t helping as the militia hit communities have got it into their heads it is the Fall Creek residents that are doing the damage and threaten to take “an eye for an eye” type of retribution. In fact, some of the Fall Creek residents have this same “eye for an eye” mentality when it comes to doling out justice to the remaining militia man, James Luther that they have imprisoned. Though it goes against what they would prefer to do both Hannah and Liam end up coming up with an uneasy compromise to solve the situation. They just hope this decision doesn’t come back to haunt Fall Creek.

The characters in this book are still amazing! The older favourites of mine are of course Liam, Hannah, and Molly. Once again Liam pushes himself to his absolute limits, despite being offered help he goes it alone, as he is used to having to do. He braves sneaking into an enemy held FEMA camp. Then you also see the tenderness of the big tough guy, when he holds his nephew Liam Jesse, or when he strokes Charlottes head. He gives Hannah his eternal gratitude when she offers to feed his nephew to try and improve his poor health. In this book I also grew to love Quinn even more, her determination and toughness growing even more, but I also felt like reaching into the book and shaking her and screaming at her not to go off alone! Poor Milo finds himself stuck not wanting to reveal anything about Xander and his gang, yet he also wants to help find Quinn and get her back in Fall Creek safely.
I adored the newcomers to the book of Travis and Evelyn Brooks (grandparents of Liam Jesse.) As soon I read her interactions and dialogue with Liam it reminded me of the forthright manner of Molly. I knew if Liam managed to get Evelyn, Travis & baby Liam back to Fall Creek that they would fit into that community well, and be positive additions. Other newly introduced characters are those guarding, protecting and working at the nuclear plant near Fall Creek. One of the military men guarding the nuclear station served in the forces with Liam.

My immediate thoughts upon finishing reading this book were . .Oh wow….just Oh wow! I am seriously looking forward to the next book, even though it is the last one! I will be really sorry to see this series end but am looking forward to finding out what will happen to Fall Creek.

To sum up I am looking forward to the final battle, to all my questions being answered, maybe most if not all the problems resolved. Will good triumph, over evil? Will all my favourite characters survive? Will there be a happy ending for a certain couple in the book?