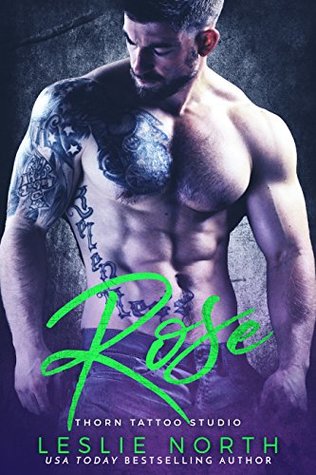 BLURB from Goodreads
Giovanni DeRose only came back to Las Vegas to work with his brothers in the legendary family tattoo studio. Instead, he’s found himself the leader of a sinking ship, thrown together with a gorgeous woman who won’t back down. But with the threat of closure if he doesn’t turn a profit ASAP, working alongside her may be his only option. Gio can do just about anything with his talented hands and bare skin, but this bad boy will need something different if he’s going to save Thorn... Riley Bryne is an Irish lass that’s as smooth as whiskey—if you don’t mind the burn that comes along with it. As Thorn’s new co-manager she’s desperate to pull it back into the green to clear her own debt, but her numbers-focused tactics throws her up against her Gio’s art-centered direction. Challenging the tattooed hunk is easy, but stopping herself falling for his smouldering touch? The odds don't look good. Riley is business savvy and a little bit bossy—something Giovanni finds frustrating in the studio and hot as hell when he’s got her pinned to their office desk. But if Thorn Tattoo is going to survive they’ll need to combine not just their bodies, but their talents outside the bedroom, too.

REVIEW
I came across this book by accident when I found Thorn, bk2 & Bloom bk3 pf The Thorn Tattoo Studio Series available on Netgalley. After reading the blurbs for those two books I went on Amazon UK and purchased this book, Rose bk1 in The Thorn Tattoo Studio Series. I don't know about everyone else but I like to swap around the genres I read and was in the mood for a lighter, maybe more romantic read and this series seemed to fit the bill. Although my intention was to read Rose first and then get around to reading the other books later. Leslie North was also an author I hadn't read before and I do enjoy trying out books by authors new to me or even debut authors.

The cover features a rather hunky looking, guy with some neat facial hair and quite an extensive array of tattoo's. The guy has his head tilted downwards which to me suggests he could be a quieter type of guy maybe even a little shy. I love the font of the title "Rose" which after beginning to read the book I presumed came from the Tattooist family name DeRose. I did initially jump to the conclusion that the lead female character must have been called Rose at some point rather than Riley but the source of the title became clearer as the book went on.

The book is set around a family owned Tattoo studio previously owned by the patriarch of the DeRose family, then when he passes the business is run by the three brothers. Oldest brother Antonio DeRose who takes care of the financial side of the business. Middle brother Luciano DeRose who has worked at the Thorn Studio but at the moment is travelling around being a guest artist at conventions, shows and other studios. The last and youngest brother is Giovanni DeRose and he is the brother this book centres on, he is also the DeRose brother featured on the book cover. The Thorn Studio isn't doing as well as it could. Antonio is sick of bringing up the subject with Giovanni who has no head for figures and financial aspects of the business. So Antonio finally takes matters into his own hands and hires Riley Byrne, a rather bossy young woman of Irish descent to co-manage and take care of the studio front desk, so bookings, taking money, doing the stock checks etc etc. One of the first things Riley does is implement a computer booking system, and look at ways that Thorn Studio can increase its turnover. Giovanni, is set in his ways using an old tattered appointment book and has a more relaxed attitude to timings and such so initially hates the new computerised system. In fact he sets his mind to hate everything Riley suggests such as the courses she wants Giovanni to give. He eventually relents and agrees to do them and takes Riley to see a conference room he has managed to book for the first one that is part of a hotel/casino complex. Its whilst they are there that Giovanni relaxes and as Riley hasn't been in a casino he talks her into letting him show her around. He bets and plays poker well, something we later learn during the other Thorn Studio books that all the DeRose men have a talent for. The Hotel/Casino complex offer Giovanni a complementary suite in the hotel, and that's where sparks fly when cajoled into going to take a look at the suite and its luxuries Giovanni & Riley kiss and . . . .

The character I loved the most in this book was Riley, she was an independant woman and not scared of standing up to the big burly males that frequent a tattoo studio. Riley certainly isn't afraid to stand her ground against Giovanni, and it's one of the first things that attract him to her. Then when he kisses her originally to kind of prove the point that he can, his feelings continue to grow. Giovanni then accidentally discovers Riley's secret and she soon learns what it feels like to be pushed into suggestions you may not be so comfortable with. Rather like the way Riley has been pushing Giovanni into changing the way things run at Thorn Studio. I also like Giovanni, for all his bustle and tough guy image, he soon gives his heart to Riley even if at first he doesn't want to admit it. Passing it off as a bit of fun to begin with.

I enjoyed reading the book, learning the different characters and names for the tattooists at Thorn Studio. Giovanni being the head tattooist, then the brief appearance of "The News" who soon leaves after his work not being up to the requires standards of the increasingly popular Thorn Studio. There's also characters who use their own "normal" names such as Jaime Ritter, and Ben Mendez who also does piercing at the studio. I'll be totally honest I know very little about tattoo's and tattooists but you really didn't need to in order to thoroughly enjoy this book.

If you are looking for a fairly short, light romantic read, then this could be just the book you are looking for. After finishing reading this book I knew I wanted to read the next one in the series. Which was quite new for me as I usually only read the occasional contemporary and romance book sandwiched in between other genres, but I enjoyed Rose so much I wanted to read more by Leslie North.

My immediate thoughts upon finishing this one were that it was different than my usual genre comfort zone. Yes, it has some steamy scenes. I did really enjoy the book. Loved all the different characters within the Thorn Tattoo Studio.