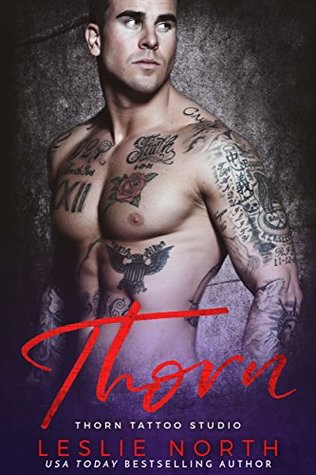 BLURB from Goodreads
Luciano DeRose is looking to get the hell out of town. He’s been absent from his position of Head Artist at Thorn Tattoo since the day he watched his future go up in flames. However, the bonds of family are strong and he’s dragged back into town as a favor to his younger brother. But Luciano isn’t staying for long and certainly not for the anniversary of the day his life went to hell. Melanie Noel has spent most of her adult life fixing Luciano’s. She’s his virtual assistant, organizational guru, and problem-solver extraordinaire. However, this ex-hippie chick wants her boss, and secret crush, to see that he can finally move on. Melanie thinks that this anniversary is the perfect time for Luciano to face his grief, let go and finally be free to see what’s been waiting for him all along. When Luciano decides to do everything in his power to leave, Melanie sees that she needs more than logic to make him stay. Risking her heart to save the man she’s loved from afar, Melanie gives into her desire for Luciano—sparked by a world-rocking kiss. The heat between them has the power to heal all wounds or it may set both their lives up in flames.

REVIEW
Quite strangely for me after just having read one contemporary romance genre book which happened to be Rose, the first book in this Thorn Tattoo Studio book by Leslie North I fancied reading the next one straightaway, hoping for more of Giovanni, Riley and the tattooists that work at the Thorn Studio.


Once again this cover is dominated by a strong male with a heavily tattooed torso, this time it is the turn of a different DeRose brother, the one we have heard the least of in Rose, Luciano DeRose. The Title font matches that of Rose but is in and orange/red instead of the green colour.

The book is set around a family owned Tattoo studio previously owned by the patriarch of the DeRose family, then when he passes the business is run by the three brothers. Oldest brother Antonio DeRose who takes care of the financial side of the business. Middle brother Luciano DeRose who has worked at the Thorn Studio but at the moment is travelling around being a guest artist at conventions, shows and other studios. The last and youngest brother is Giovanni DeRose and he is the brother who runs and works at the Thorn Tattoo Studio along with his new wife..

So this book centres on the ever wandering tattooist brother Luciano. Luciano once thought he had everything and had bought a house ready to settle with the love of his life, Cassandra. Tragically Cassandra is killed in an accident and Luciano has neither faced his loss, nor gotten any where near dealing with it. It's like he is stuck in limbo, only partially living whilst at the same time avoiding Las Vegas where the accident occurred as much as possible. However when his brother Giovanni and his new wife go on tour round various tattoo conventions and guest tattooing rather like he has been doing he is drafted in by the oldest and it seems most level headed DeRose brother, Antonio. Luciano is needed to step in and do tattoo's that Giovanni would be doing if he where there as well as manage the shop. Luciano is much like Giovanni who has no head for financial figures. In  fact at the beginning of the book Luciano has no time for any sort of figures even female ones! He is used to travelling a lot and having his PA Melanie sort out his paperwork and quite literally carry his baggage in her car whilst he travels light on his precious motorbike. Melanie decides its time that Luciano faced up to what he lost and try to get on with his life and she is determined to at first gently push him in that direction and then when he refuses she pushes harder by making deliberate mistakes meaning he has to face people and reality to sort them out. When Luciano realises he is being "played" he sets about an elaborate plan to get Mel to go back to being his buffer between him and reality by faking an email to his brother Antonio suggesting they fire Mel. Instead of sending it to his brother Luciano "accidentally" sends it to Mel!! When he see's Mel's reaction and hoe upset she looks when walking out of Thorn Studio, Luciano is shocked, and then left alone to lick his wounds. It's then he realises how much he depends on Mel and soon misses her being around. Feeling totally sorry for himself around the anniversary of Cassandra's death he goes out drinking and has only one person to call to pick him up . .  he turns to Mel. Will Mel help him? If she does will Luciano apologise for his previous actions.

Though this book series has a central theme of hunky tattooists don't let it put you off. As when you read the series you soon find out for everyone of the hunky, quiet, brooding DeRose brother there is a feisty kick butt female waiting for them to open their eyes and see her and prove themselves worthy of her too. Again I enjoyed the book. There are quite a few of plot similarities between Rose and Thorn but then again they are both romances and the main male characters are brothers so there was bound to be a little repetition wasn't there? The only other fault I could possibly find is there was no Riley or Giovanni in this book!

Immediate thoughts upon finishing this one were that the book had been another enjoyable great read. That in Thorn it had been the turn Luciano DeRose to find love. Also after reading two out of the three book series I just had to read the third and was presuming it would be the turn of Antonio the financially minded DeRose brother to find love and happiness.