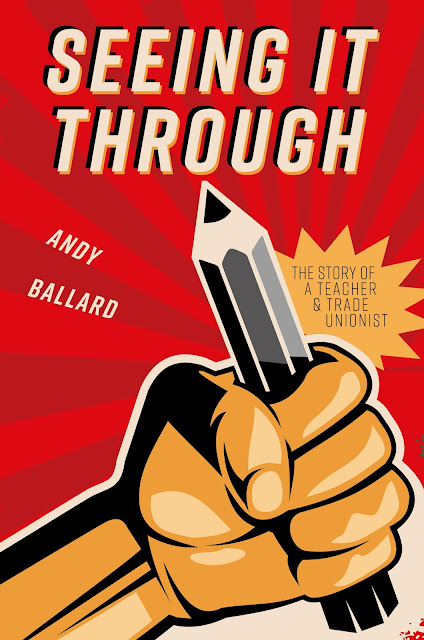 Title: Seeing It Through
Byline: The Story Of A Teacher & Trade Unionist
Author: Andy Ballard

Book Information supplied by Authoright Marketing & Publicity
Andy Ballard comes from quite a humble background; being a working class boy from a council estate at a middle class grammar school left its marks. A career teacher with nearly twenty- ve years in state education, he forged a second very successful career as a local, regional, and national of cer of his trade union. His story includes how his work at the Association of Teachers and Lecturers would secure the future of ATL and lay the foundations for the formation of “The Education Union”. Ballard describes the interplay between his private and professional lives, and bares his soul when the pressures of a lifetime of commitment brings his story to an unexpected conclusion.

ABOUT THE AUTHOR
Andy Ballard has enjoyed an extensive career in the education sector including twenty-five years as a science teacher before transferring his efforts to being a trade union official and advocate for teachers and their pupils at local, regional and national level rising to become national President of the Association of Teachers and Lecturers. Since then he has spent several years as a Senior Regional Official, covering the South West peninsula with a role as spokesman and advocate on employment issues for the Chartered Society of Physiotherapy. Now retired, Andy enjoys spending time at Weston Rugby Club where he occupies the role of first team manager, as well as taking long walks in the Mendip Hills with his dogs, and writing the occasional comment article for his regional newspaper. He lives in Somerset with his family.

In this short extract describing my school days I recall the difficulty that being a boy from a council estate at the middle class grammar school presented.
My Grandmother's admonishment had a lifetime of impact on me. She had spent most of her life working in domestic service starting at the age of twelve. Her employers refused her permission to marry until she was 32, and they extracted every last ounce of effort from her for little reward. She regarded them as being entitled to this way of life and looked up to them, almost to the point of revering them. They were gentry, from a different class and people such as her, and by inference me in my turn, had no business seeking to be on equal terms with them. Despite coming from a very humble working class background she remained loyal to the ruling class and would not countenance and criticism of them or the system that kept them in their privileged position.
Although I didn’t realise it at the time this is the mindset against which I have railed and set the scene for my own contribution to the fight for equality and social justice.

EXCERPT
The distinctive blue and gold cap, the blazer with the school badge, and the blue and gold tie meant that you could not hide, or go to and from school unnoticed. This was especially true on the corporation bus that I caught just down the road from my house and which went through the council estate of which our road was an annex. The children from that estate were the ones I’d been to primary school with, and my brother and I were the only boys from our council estate to go to the grammar. They did not attack us or have much to do with us at all, but their disdain was all too obvious and comments about us going to the ‘snobs’’ school set us quite clearly apart. If this were not bad enough, the boys at the grammar school, once they knew where we were from, made it plain that this was their domain, and boys ‘of our sort’ had no place amongst them. Their fathers were bankers, lawyers, accountants, doctors and military men. Many of them lived in large private detached houses, and most owned cars; they regarded themselves as being superior to us in every way. They were far too middle class to be openly hostile, but there are many other ways to isolate people and make them know that they do not belong. I was dismayed and hurt by this. Surely there would be some reward for putting up with the discomfort of being treated with disdain by those who lived near me? Surely showing that I could be as clever as some of these middle class boys would win their approval? I came home one day very disconsolate and my grandmother asked why I had such a long face. I explained how hurtful it was that these boys could treat me as such an outsider and she told me, in words that are now burnt into my soul, “Don’t you dare speak about those boys like that, they are entitled to behave like this, they are gentry.” She didn’t mean to be unkind, she was just reiterating her life-long adherence to knowing her place and she was upbraiding me for wanting to get above my station. Little did she know that this would echo down my whole life, set the foundations for my lifelong belief that there is a better way, and drive me ultimately to my own mission to do whatever I could to improve the lot of ordinary working people and in particular their children. I didn’t know this myself at the time but the fact that I can remember her indignation that I should question the right of my betters to decide how my life should be serves to prove how life defining that moment was.