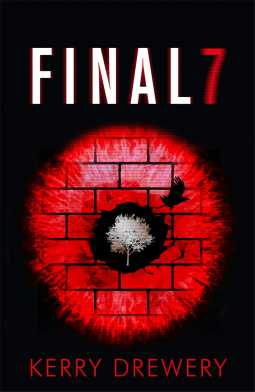 BLURB from Goodreads
Martha and Isaac have escaped, but are now on the run - the government has branded them rebels and a danger to the public. Despite the rewards being offered for turning them in, Martha and her friends are safe in The Rises, the area of the city full of the poor and the powerless. But then the Prime Minister orders a wall to be built around The Rises. Is it for the the safety or the poor - or is it to imprison them? Martha needs to act, and to act fast, in a tale of breathtaking treachery that reaches right to the heart of government...

REVIEW
I had mixed feelings about reading this book, on one hand I really really couldn't wait to read it, yet at the same time I also didn't want the story to come to an end. I was really looking forward to catching up with Martha and Isaac after the ending of Day 7. In fact my immediate thoughts as I finished reading Day 7 were: Could there be a book three? Please tell me there's more to come from this dystopian/futuristic society? There's so much more, there has to be!


In keeping with the rest of the series this cover has The backdrop of the cover is a brick wall which fits well with the theme of incarceration the focal point of the cover is as eye-catching as Cell 7, and Day 7, though this time the colour is red. In the centre of the "eye" or maybe a "camera lens" though in this book it could also represent the idea of a target because the “Rises 7” are all wanted felons in this book Then there is the tree again, which I would say represents the tree Martha used to try to catch a glimpse of during her incarceration. The tree with the bird flying away from it is once again prominently featured, and I still think that maybe the tree represents the growth of something? Perhaps a banding together of those against this present justice system. The bird may represent hope and freedom. I’m looking forward to finding out more in this final installment of the Cell 7 Trilogy.

The genres I have seen listed for this book are YA, Sci-Fi & Fantasy & Teen. I totally agree that this book fits all those categories but I personally would also add dystopian and futuristic too. I should also confess to most certainly not falling into the category of being a Teen or Young Adult either but I have truly loved reading this brilliant book series.

This book starts with a prologue kind of refreshing your memory to where you are within the book series. It all begins with Martha panicking as to whether Isaac is breathing or not, she can hardly see through the tears in her eyes and her hands are sticky with blood. Gus is with Martha and he places his hand on Isaac's chest and tells Martha that Isaac is breathing. The car they are travelling in is hurtling towards the boundary between "the haves" in the city and the "have not's" in the rises. As they approach this once, invisible boundary they notice lots of lorries ahead and what looks like some sort of wall being constructed. Though at the time they don't know what to think about it. Martha quietly murmurs wondering what it is for, To keep us out? Control us? Then whispers Berlin, Israel, Belfast, Korea and Gus replies "And now London"

I really enjoy how the chapters vary from being from the point of view of the different characters such as Martha, Max, Eve, Cicero and the TV broadcasters too. It makes the book feel fast paced and you feel you are there watching the broadcasts that are churning out the stories as the government wants people to see them. Martha Honeydew, Isaac Paige, Eve & Max Stanton, Ex-Judge Thomas Cicero, Ex-presenter Jerome Decker and Gus Evans are being labelled as terrorists and the media has given them the name of the "Rises Seven". Martha is still being blamed for planting a bomb at the old TV Studio's and it keeps being reported if Patty Paige dies, Martha will be back on death row. The show, Death Is Justice is still being produced and the prisoners are now being kept at The Old Bailey. It's certainly a case of the "show must go on" with Joshua out of favour its out with the old and in with new. So the new presenters are Kristina Albright always in her pristine suits and immaculate looking and is now the main studio presenter. Then there's Gerome Sharp, the man "on the scene" or within the scene and part of it in this book, There's a few times Gerome finds himself in a predicament being in close quarters to prisoners and at the receiving ends of items being thrown! Throughout quite a lot of the book, the general public are led to believe that Martha is in fact in prison. So Martha spends lots of her time being afraid of being discovered and having to use various disguises such as a large hood and even a wig at one point. Martha, Isaac and Gus were helped to escape by a "mystery" woman who is very pivotal in this book as she has inside information that helps the "Rises Seven" And mostly Martha gather documents needed to reveal all the underhand deals and the biased trials the government have been a part of. The government and Prime Minister Rennard show what they think of the people living in the Rises by contructing a wall and staffing it, so that all those that live in the Rises but work elsewhere have to have a pass to get out of the Rises to get to their jobs. Things rapidly become worse until only the privileged few with special passes are allowed through the wall border. It is lucky for Martha she seems to have help from such a high ranking person and that means she can get in and out of the Rises. Not that it easy, as she has to disguise herself.

In this final book the whole voting on who lives and dies escalates even more than in the other books. As the "Studio" is moved to the Old Bailey that is a historical building as it is where those sentenced to death were kept years and years before. Gerome Sharp loves going on about historical cases, and what it must have been like to walk along the corridor called "Dead mans walk". He goes into great detail about a section of the corridor that is open to the elements above being where those in the olden days would gather to pelt the convicted with rotten fruit and vegetables!

Among my favourite characters in this book were Eve, especially the very last scene she is in. (It will make sense when you read the book). We do see a totally different more cunning and sly side to Max in this book too. He goes through a phase of not knowing who to trust or what to do to attempt to help his mother gain her freedom. We also learn in this book that though they haven't initially told each other that Eve and Cicero are in love with each other.
Of course I love the character of Martha who once again shows her bravery, though she probably would see it as that. Martha has to put trust into a mystery woman who seems to want to help her and the Rises Seven clear their names and change the whole justice system. Though what is in it for the mystery woman? Does she stand to gain anything? Or could it all be some bizarre trap.

In Final 7 we see the general public living in the Rises banding together to support someone that has helped many of them. It is these people from the Rises that together with some of the city people finally see clearly at what is wrong with their current justice system. Martha manages to provide documents that make them think about what they have been led to believe currently and in the past. There really is strength in numbers in Final 7.

I really don't want to go into the plot in more detail as I think that would spoil the reading experience of others. Just be prepared with the tissues as there were a couple of parts that had me tearing up. There is love, sadness, loss, family, the kindness of strangers and the betrayals of those once thought to be so reliable. There really is so much packed into this book I absolutely hated having to put it down. In  fact I ended up reading the book in just three reading sessions. One of the things most disturbing about this book is that it isn't all that much of a big leap away from our present reality. There's so much reality TV these days, and there always has been a fascination with courtroom drama and serial killers etc. It doesn't take that much imagination to visualise the plot and contents of this book happening in our near future at all!