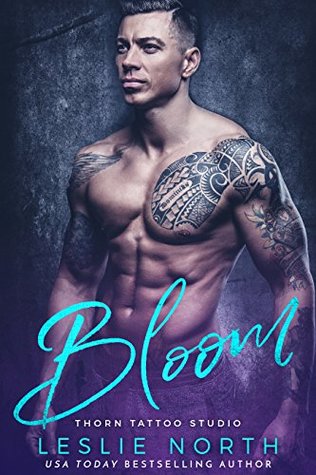 BLURB from Goodreads
From the boardroom to the bedroom, Antonio DeRose is a man who always gets what he wants. And Antonio wants Evie. Antonio took a risk when he purchased Bloom Tattoo. The studio is a “fixer-upper” that could pay off in spades...or cost him Thorn, the family’s studio. He knows the key lies in making Evie Stuart, the tattooed sex kitten, head artist. He can see that beyond her beauty, that the fiery girl has some serious brains too. Evie, on the other hand, is more than happy to continue being a tattoo artist. She likes being free to follow the wild creativity of her imagination without risking the livelihoods of other artists. Because even though Evie can’t stop thinking about his scorching touch, she has no desire to share a boardroom with him. While pride brings them together it’s their shared desire that has them entangled. At first, Evie thinks that their head banging sex will keep her career change at bay—but when their shared passion begins to bleed over into the business, can either pull away from their love without losing everything? Or will they finally realize that you really can have it all?

REVIEW
After reading Rose and Thorn I couldn't possibly not go straight on to read the third and final Thorn Studio book, Bloom.


This cover once again is dominated by a hunky but more sparsely tatooed male. This time the male is clean shaven and is the final DeRose brother. This time the font is in a light blue colour. I have to say the covers of the Thorn Tattoo Studio are done in a cohesive way and fit very well together. I think they would look great together on a book shelf.

The book is once again set around the family owned Tattoo studio previously owned by the patriarch of the DeRose family, then when he passes the business is run by the three brothers. The youngest brother is Giovanni DeRose who found love in bk1 Rose. The middle brother Luciano who lived to travel around to conventions and guest tattoo at other studio's, his story was told in Thorn. This book is the centred on the oldest and possibly quietest brother who would probably be perceived as the serious or even boring brother.

Once again continuing the theme of for every hunky tattooed DeRose brother there is a feisty yet secretive woman on hand to tame them and fall in love with them. This time the feisty female is Evie who herself is a rather talented tattooist. Antonio DeRose presents a serious all business attitude but can't help looking over the cute tatooist he thinks should be made head tattooist of Bloom. However Evie has her own secret reason in her past that is the reason she will do anything to avoid the job. Evie ends up being the spokesperson for the rest of the tattooists that worked together when the studio was called Richochet, which makes Antonio all the more determined that she is the right person for the head artist job. Evie has noticed how Antonio's gaze lingers on her and her figure even though she wears clothes that cover her up and tend to hide her shape. Evie decides to use this to her advantage as if she and Antonio are in a relationship or having a fling it would be perceived as favouritism if she were head artist. So things certainly don't run very smoothly for Evie and Antonio.

I loved Evie in this book. When you find out her secret that is preventing her committing to being the head tattooist your heart really does sink for her and it makes her refusal completely understandable. I think Evie and Antonio have quite a few reservations about their prospective relationship, both are a little afraid to commit, and have a fear of being hurt. So its totally believable that their relationship has lots of hills and troughs to go through before they come to any sort of understanding of each other.
I feel I should also admit that during the other two books I honestly didn't like Antonio much, he seemed like the stuck up brother who was only interested in the profit margins for the tattoo studios. Though he shows he has a softer, more creative side too. He can also tattoo but as he is more business minded and has a knack for investing he chooses to be the "brains behind the brawn".

Again I have read reviews that have complained about these books being very similar. I readily admit that I found that this book does have similarities with Rose and Thorn but once again I would put this down to the main characters being three brothers. It also has a very similar romantic theme throughout the series that some could say is made up of the same formula. I would say that is also true but as a series there need to be certain similarities running through each book to keep the books as a cohesive set. The only negatives I had were the cover could have depicted Antonio as the least tattooed brother a little better as at the beginning of Bloom he only has an unfinished tattoo on his back where the cover model has tattoos on his chest and arms. The other negative is its a shame its the last book so not a bad negative! I would love more of the DeRose family (not just the brothers), perhaps we could have the other artists stories, and/or a continuation of the DeRose brothers relationships set a few years in the future.'

My immediate thoughts upon finishing this book were that this was another great installment in the Thorn Tattoo Series. It's a shame to see the series end. I'm not usually into contemporary romance but I have really enjoyed reading about the DeRose brothers.