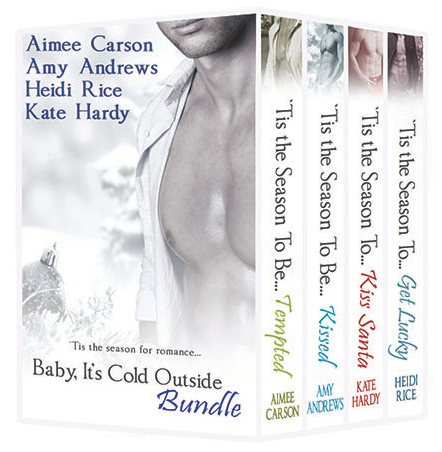 BLURB from Goodreads
‘Tis the Season to Kiss Santa by Kate HardyWith the help of a sprig of mistletoe and some snow angels, a recently single pastry chef teaches a highly successful and sexy Scrooge the true meaning of the holidays on a snowy Christmas Eve that quickly heats up.  ‘Tis the Season to Get Lucky by Heidi RiceWhen a Christmas Day blizzard strands an up-and-coming marketing manager and her boss’s very off-limits, very hot playboy son in his department store, the two toe the line between naughty and nice as they unwrap their holiday presents—and each other!  ‘Tis the Season to be Kissed by Amy AndrewsA down-on-her-romantic-luck kindergarten teacher plans to drown her New Year’s Eve sorrows in a gallon of spiked eggnog, but the arrival of her best friend’s sexy brother threatens to melt the snow piling up outside the tiny Vermont cabin.  ‘Tis the Season to be Tempted by Aimee CarsonAfter the worst year ever, a jilted music manager rings in the New Year alone, swearing off men forever. But things get complicated when her brother’s best friend, the perfect man with the perfect body, tempts her to break her vow—if only for one hot night!

REVIEW
I thought it was time to read a few Christmas themed books so I could review them before Christmas. As I have been reading more of the contemporary genre I decided to go for this Novella anthology.

Each book has its own cover and there are different male torso's featured for each novella to represent the main male characters in the stories, which also suggest that the individual novella's are romance in genre. The bylines on the bundle cover are "Tis The Season For Romance. . . " and "Baby It's Cold Outside" both fit all the novella's within this bundle.

The genre's I have seen listed for this novella collection are Contemporary, Romance, and Holidays, which I totally agree with. The "holiday" featured in each novella is Christmas. The genre and book are certainly the type of feel good slushy read to sit by the fireside reading on the cold dark winter nights.

All the novella's are set within the holiday season of Christmas, and their main theme running through them is romance. Another theme featured within the novella's is "unlikely matches" in that those who find romance are not necessarily two individuals you would put together and expect to work out as a couple.

‘Tis the Season to Kiss Santa by Kate Hardy
The main female character is Ellie, who is visiting her Aunt Betty who is in hospital having a hip operation. Ellie takes the place of her Aunt at the children's hospice as Santa's Elf.
The main male character is Mitch Carter, he didn't have a great childhood, hence he doesn't have a lot of contact with his family and never goes home for Christmas. Mitch's boss kind of blackmails him into taking his place and being Santa at a local children's hospice siblings party. The party has been given by Mitch's boss and Ellie's Aunt at the Children's hospice for the sibling of the terminally ill children for many years.
Mitch and Ellie don't get off to the best start when Mitch is almost late. Ellie is wholeheartedly into making the party great for the children. Mitch is initially not feeling in any way festive but his mood is changed by the siblings of the children in the hospice and how kind and thoughtful they are. Mitch ends up giving Ellie a lift back to her Aunt's home, going in for a coffee and ends up stranded there because of the snow. . .
I did enjoy reading this novella, it certainly had the spirit of giving with CJ (Mitch's boss) and Betty putting on a party for children that would probably be forgotten about otherwise. The novella definitely had the "feel good" factor and was a good seasonal read. This novella is for an 18+ age group because of it's steamy nature and specific, rather explicit language. I would take a closer look at any other novella's/books by this author.
‘Tis the Season to Get Lucky by Heidi Rice
The main female character in this one is Kate Braithwaite who has recently landed a great job in Manhattan, initially she maintained a long distance relationship with her boyfriend. She is looking forward to her Skype call with him later, but when she checks her email she finds out he has dumped her via email! She goes into work deciding she may as well use her time productively. It's whilst she is working that she hears a loud noise. It turns out to be the Bosses son who was in the process of choosing a gift. Kate has heard rumours about the bosses son, that he is arrogant and stuck up too. So when Kate finds he is the cause of the noise and the disarray of the Christmas sales displays she is not impressed. But when they end up having to stay in the department store overnight due weather conditions, Kate gets to see a totally different side to Ryder. They end up having an enjoyable night but is that all it is. . . or could it lead to more.
Oh wow I really loved this novella. The way both Kate and Ryder jump to conclusions about each other, proving first impressions are not always right. Then as they get to know each other better and enjoy living the dream of being locked in a department store and using whatever they need! I really like both characters and it was a shame we didn't get to meet Ryder's daughter. This novella left you wanting to know what happened next too.
‘Tis the Season to be Kissed by Amy Andrews
Tamara is 30 years old and is hiding away from the Christmas and New Year's Eve at a friends cabin. Tamara is ready to settle down with Mr Right but all she seems to be attracting is Mr Wrong who wants a fling or a no ties relationship. It's cold at the cabin and she can't find the matches to light the open fire so she is wearing layer upon layer of clothes and drinking eggnog already at 11am in the morning!
A rather drunken Tamara is startled when she hears someone at the door of the cabin trying to get in. Tamara quickly looks around and finds a golf club as a weapon and uses it when a male figure enters the cabin. She finds herself in a tussle on the floor of the cabin with her friend Georgia's brother Luke. It turns out the bad weather means the cabin was the nearest place to home he could get transport to. Luke is 25yrs old though feels older with all he has seen on his tours of duty. He is home from Afghanistan to surprise Georgia for her birthday party. Luke soon gets the open fire going and then the drunken Tamara begins stripping her layers off much to Luke's amusement. It soon becomes apparent that they both find each other attractive, but can Tamara trust the younger male is wanting a relationship and to settle down as she is wanting. . . .Can Tamara get over the fact she is seriously crushing on her best friends younger brother....
Again I really enjoyed this novella and left me wanting to read more, like Georgia's reaction at her party when she realises what has happened between her brother and best friend. I will be checking out other novella's/books by this author.

‘Tis the Season to be Tempted by Aimee Carson
In this novella the main female character is Evie Lee Burling and she is on a plane even though she hates flying traveling home with a bunch of "I told you so" comments awaiting her at home. Evie as had an awful year whatever could go wrong quite literally has gone home.
Also on the same plane is her brother Dan's best friend Wes. Wes didn't have a great family life as a child, in fact he spent much more time round at his friend Dan's house where he was made to feel like part of the family. Most people distanced themselves and were downright rude to Wes when his father was found guilty and imprisoned for embezzling money. Dan and his family never turned their back on Wes which he still appreciates even though he has become a successful business man in his own right now. So when Wes hears Evie voicing her fears and concerns about the possibility of a plane crash he feels duty bound to try to calm her down before she gets herself thrown off the plane. Wes ends up having little choice but to sit next to Evie on the plane and ends up taking care of her when she is drunk after drinking alcohol to calm her nerves about flying.
One thing leads to another . . . Evie had sworn off men after just being dumped, but Wes is a friend. . . .she can trust Wes can't she, and its fun to wind him up as he is such a "prim & proper" male. They end up being stranded because of a weather storm too, sharing a room, but will what they have be a one night only?, or could Wes be the guy to tame the rebellious Evie?
Another great novella read that leaves you wondering how things worked out for Wes and Evie. I would have liked to read even more about these two characters.

My immediate thoughts upon finishing the novella bundle were great set of novella's to get you into that slushy Christmas mood. Certainly discovered a new Author or two to read more of.

So to finish up my thoughts after reading the whole novella bundle was that they make a great read, if you are wanting to get into the Christmas spirit. These novella's are perfect to read with a hot drink snuggled up and warm by the fire and all have a "feel good factor" within them. This bundle is a great way to discover some new contemporary genre authors too. The novella's can be read individually during your "wind down to sleep" time.