REVIEW - HARK - THE BIOGRAPHY OF CHRISTMAS BY PAUL KERENSA 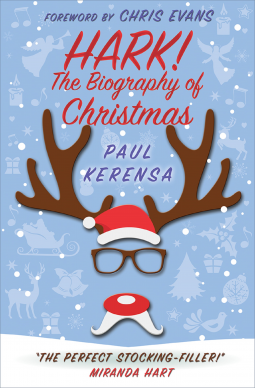 BLURB from Goodreads
In this delightful sleigh ride through Christmas history, Paul Kerensa answers the festive questions you never thought to ask… Did Cromwell help shape the mince pie? Was St Nicholas the first to use an automatic door? Which classic Christmas crooners were inspired by a Hollywood heatwave? And did King Herod really have a wife called Doris?Whether you mull on wine or enjoy the biggest turkey, the biggest tree or the biggest credit card bill, unwrap your story through our twelve dates of Christmas past. From Roman revelry to singing Bing, via Santa, Scrooge and a snoozing saviour, this timeless tale is perfect trivia fodder for the Christmas dinner table.

REVIEW
Approaching this book I was hoping for some funny stories about the different aspects and traditions of Christmas. With a foreward by Chris Evans, and an endorsement from Miranda Hart (Who I find really funny to watch) saying "The Perfect Stocking-Filler" I had high expectations for this book.


The cover has a light sky blue background with a decent amount of snow fall too. The cover has Christmas themed items within the "sky" part of it such as trees, a sleigh, doves, a stag/reindeer etc. Then the prominent part of the cover are like pieces you would put on a MR or Mrs Potato head, so there's reindeer ears, glasses, a Santa hat and red nose. All this adds to the Christmassy feel to the book. The title Hark! is quite dominant and catches the eye well, so I guess it should stand out well on a book shelf. There's what I would describe as an endorsement, or maybe recommendation or quote from Miranda Hart of "The Perfect Stocking-Filler". I admit as I do like Miranda Hart as I find her quite funny so her comment would encourage me to purchase this book.

The genre of this book is described as "humour" on Netgalley, and yes it does have some funny parts within the book and yes certain parts of the book made me smile.
In my opinion the content within this is more of an informative, factual nature, with the addition of a little wit rather than funniness. The other genre I think applies to this book is nostalgia when finding out where all the small decorations, and traditions began and the original meanings behind them.This meant I didn't think the genre choice was specific or clear enough, meaning for me the book wasn't what I thought it would be.

The book is quite long and has lots of factual information within it from talking about the twelve key dates that have shaped our modern day Christmas. Apparently some early non-Christian Christmas' were merely the gathering of friends and family that coincided with winter and Christmas. This would also be the type of Christmas that existed before Christ, and the more religion connected Christmas. Years before celebrating the birth of Jesus, the "party" was to urge on Spring so not so much praising the "risen son" as "rising sun".
The book also reveals the four traditions around the Yule log and it decrease in popularity when fire places were much smaller and other decorations were increasing in popularity.
The book also discusses the story of St Nicholas which I can remember clearly listening to being told at the Church of England School that I attended. The whole poor man with three daughters that needed dowry money to enable them to be married, and St Nicholas throwing a bag of coins in through an open window that land in a stocking hung up near the fireside. It is covered in a little more detail in the book. Re-reading and recognising this certainly made me smile and gave me that feeling of nostalgia.

I enjoyed both learning about the traditions from different cultures, religions and countries too. Such as the Christmas Tree tradition originally being German tradition. The book also covers Christmases of old when stores closed for a couple of weeks so you had to buy in large amounts of food and drink to tide you over until the shops re-opened. These days most shops only close for Christmas Day, with larger retailers re-opening on Boxing Day for sales. Speaking of sales we have some stores starting sales Christmas Eve!

I found various parts of the book really interesting such as the section which talks about the Santa equivalent different countries have such as Italy has an old woman called Befana that rides on a broomstick and hands gifts for the good and coal to the not so good. Russia also has a female equivalent of St Nick. She is a white robed elf maiden who has a sleigh. In the Ukraine it is Father Frost and the Snowflake Girl.

The book also discusses Advent Calendars and their origin, as well as famous "Christmas Crooners".  Christmas Carols and songs are mentioned going into quite a lot of detail about them. At the very end of the book there is a timeline from 4000BC to 2015. There is also an added joke prediction entry for the year 2048!

So although I did like most of the book there were sections that seemed to drag on and I felt a little impatient with those. I do agree with the quote Miranda Hart makes on the cover that this book would indeed make a great stocking filler gift, especially if the person you are buying is a bit of a history buff. My initial thoughts immediately as I finished the book was that this is an informative book and Christmas and its origins, customs and traditions from around the world.

PS. Since reading the book and writing this review, I have spoken online to the author and this was never meant to be given a label of "humour" at all. Which knowing that really puts a different perspective on the book because as a non-fiction, customs & traditions and society & culture this book is a great read!